The Best Houston Sausages for Your Home Barbecues 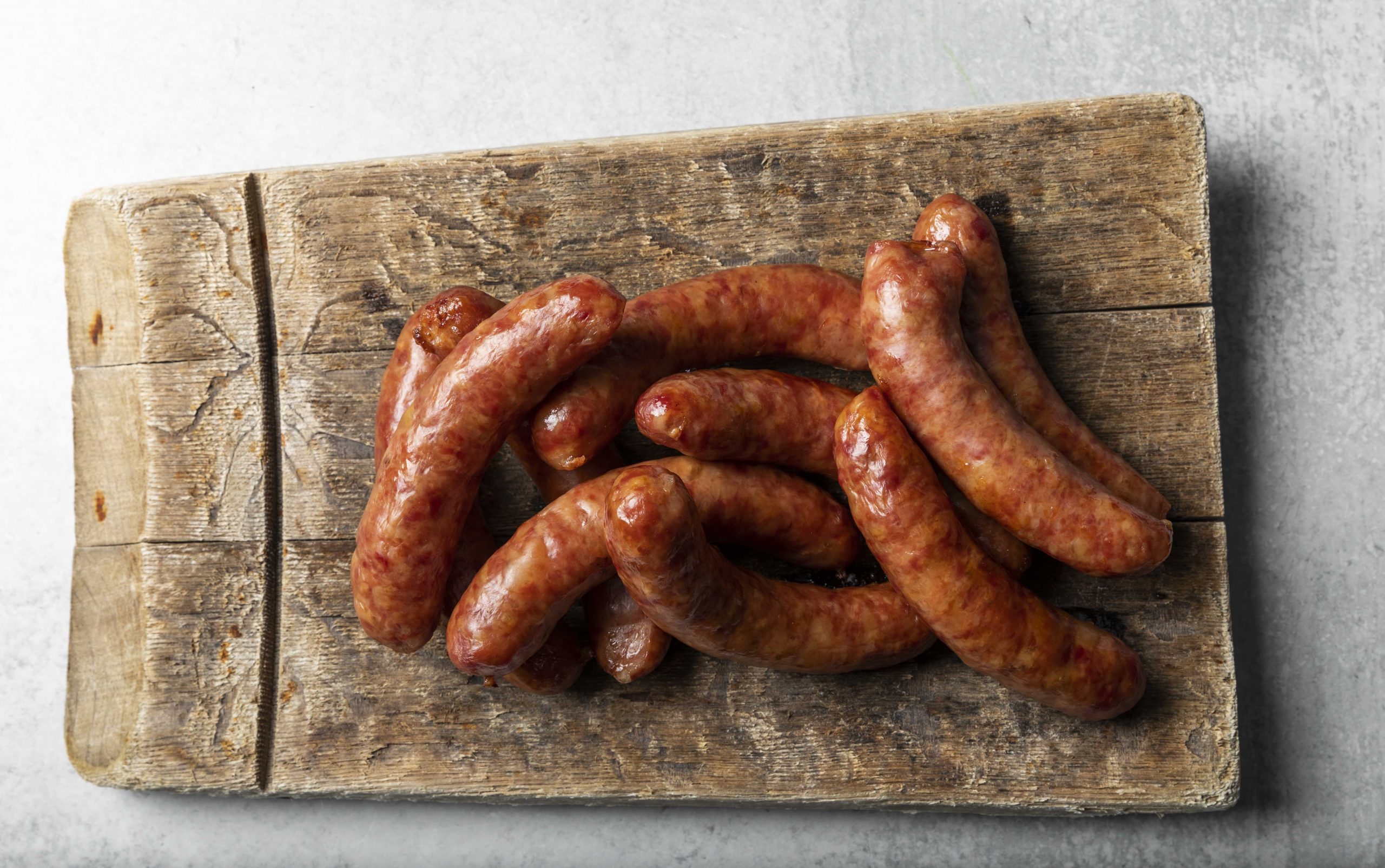 A good barbecued sausage is meaty, with a crisp, taut skin ready to burst with the slightest bite, releasing silky pockets of orange fat that explode in your mouth. Achieving the real deal at home takes a coarse meat grind, ice cold fat, plenty of black pepper and fragrant wood smoke. There are a host of great barbecue joints that serve authentic, hand-stuffed links all over Texas, but if you want to recreate these sausages at home, we have a few suggestions.

According to Daniel Vaughn, barbecue editor for Texas Monthly, fresh sausages are better for smoking or grilling at home than pre-smoked or fully cooked ones. However, fully cooked, smoked sausages ship better and are already smoked the way the pitmaster intended. The ones you can purchase across the Lone Star State can be wildly innovative or staunchly traditional. Stone Cold Meats in League City uses ingredients such as ghost peppers and mac and cheese, while Kreuz Market in Lockhart boasts an 110-year-old recipe.

In Texas, sausages vary by region and provenance. The terms used to describe the various kinds can be confusing. If it’s an Elgin hot link you seek, an East Texas hot link may disappoint. That’s why we’ve included a brief primer to help you navigate the wonderful world of Texas links and sausages. (One more thing, though not many people make the distinction anymore: “links” used to mean an all-beef product and “sausage” was beef and pork.)

After that, we list the best locally made links and ropes. You’ll also find a list of smoked sausages from around Texas that you can mail order either directly or via Goldbelly — if you’ve given yourself enough lead time.

Styles of Sausage Found In Texas

East Texas Hot Links (also known as Pittsburg Hot Links, Garlic Bombs, Homemade Links, Juicy Links or Grease Balls): These all-beef links are stuffed in beef casings, which are tougher than pork. They are also devoid of binder, so the meat crumbles like ground beef. The high fat-to-meat ratio makes these links look like transparent little cauldrons of bubbling trouble. This style of sausage can be found in East Texas, from Pittsburg, TX, where they tend to be milder and eaten with hot sauce and crackers, to Beaumont, where they are spicier and eaten on white bread. In either case, the contents of the casings are squeezed out like toothpaste and the casings discarded.

Texas German Sausage (also known as Hot Guts or Elgin Hot Links): In the Hill Country, the beef for these links is stuffed into pork casings. Purists will tell you the original German recipe does not contain garlic. Despite the name, hot guts can range from spicy to mild. The beef mix commonly includes a binder of bull flour (finely ground corn, wheat, rye, oats and/or rice), so these hold together better than East Texas hot links. According to lore, the original hot guts were created in the 1880s by William J. Moon, a butcher who later purchased the Southside Market in Elgin (now the oldest barbecue joint in the state). The recipe is reported to be Moon’s original but with less cayenne and black pepper. It is not uncommon to see a little pork, even in very old hot guts recipes, but the more pork and garlic comes into play, the more likely it is that the recipe has a Czechoslovakian heritage.

Czech Sausages (also known as Klobase or Klobasa): These are the dominant sausages in Texas barbecue. Similar to hot guts but with more pork and garlic, Czech sausages often have banal names that reflect the main ingredients, such as “spicy beef and pork”. Sometimes, these are referred to as klobase and klobasa, which are terms that simply mean “sausage” in Czech. Other times, “Bohemian” or “Moravian” are used to describe this style. A typical Czech butcher would also make other types of sausages, including German and Polish styles, for good measure.

Chaurice (also called Cajun Spice Or Green Onion): This spicy sausage is an African American take on Spanish/Mexican chorizo. Fresh garlic, cayenne and green onion are essential for a good chaurice. (Those referred to as green onion sausage are usually the mildest). The original recipe appeared in the Times-Picayune Creole Cookbook in 1904. Frenchy’s carries this style of sausage, but a lot of the local butchers we mention carry Cajun and Creole sausages, which are branches of the chaurice tree. In Louisiana, it is used primarily in dishes such as jambalaya and red beans and rice, but in Texas, it is mostly grilled or smoked.

B&W Meat Company, 4804 North Shepherd: This 62-year-old Garden Oaks butcher shop carries a wide selection of meats in various cuts. It makes over 30 varieties of sausage, all of which come fully smoked. If you prefer fresh, you can call ahead and ask what is available. With a such wide variety of sausages, the butchers always seem to be working on a batch. The rotating selection of ropes come in varieties such as Potato and Green Onion, rabbit, Cajun, crawfish and Louisiana Hot Links — there are numerous permutations of beef, pork, garlic and spice-level. Also on hand are a variety of cured summer sausages and dinner-ready meats, like the five different varieties of stuffed chicken. B&W also offers custom cuts and deer processing.

Bud’s House of Meat, 6730 Cullen: Since 1977, this butcher shop has kept its focus on barbecue, Texas style. Folks come here for coarsely ground chili beef, perfectly trimmed brisket, T-bone steaks and an outstanding variety of sausages, which customers can buy fresh or smoked. Bud’s carries deer, Cajun, Green Onion, Jalapeño-Cheese and Texas Hots (aka hot guts) to name a few. In the refrigerated section, there is also a selection of sausages from City Market in Schulenburg, TX and Savoie’s in Opelousas, LA. For big parties, there is a wide variety of meat packs, which are cheaper than buying the meats separately. If you’d rather not cook, Bud’s serves barbecue to-go Tuesdays through Saturdays.

Henderson and Kane, 715 Henderson: The sausage-making at this mom-and-pop Sixth Ward grocer and barbecue joint is handled by master sausage maker Aaron Lazo Sr., formerly of the now-closed, Fifth Ward classic, Burt’s Meat Market. Beef and Garlic and Jalapeño Cheddar are mainstays served in the traditional loop style. Mild or spicy boudin as well as red or green chorizo and a variety of pan sausages, such as Italian breakfast, are also on hand. Neighbors appreciate the local groceries like Mill-King dairy products, Kraftsmen Baking baked goods and Kenz Henz Eggs, as well as practical items like aspirin and dish soap.

H-E-B, multiple locations: The bigger H-E-B’s will usually have a large variety of fresh sausages that are great for grilling, many of which are made right here in Houston and the surrounding area. In addition to the fresh sausages, Prasek’s, Slovacek’s and Chappell Hill are good fully smoked Czech options from the Hill Country.

In addition, at 60 H-E-B locations in the Houston area, you can find James Beard award winning chef Chris Shepherd’s Pork and Smoked Bacon Sausage. Made with cured and smoked pork belly, and sweetened with molasses and brown sugar, it’s interestingly reminiscent of glazed Virginia ham. Although the sausages contain smoked meat, these are not fully cooked, which means these are perfect for grilling. The Pork & Smoked Bacon Sausage can also be purchased via mail order and shipped to anywhere in the country.

Frenchy’s quintessential chaurice sausage is also sold fresh (or frozen) at H-E-Bs throughout the city. It was developed by Percy “Frenchy” Creuzot, who grew tired of importing sausage from Louisiana for his Third Ward po-boy stand. Now part of the Frenchy’s Chicken brand, it is a spicy, garlicky favorite.

Tejas Chocolate and BBQ, 200 North Elm, Tomball: What started as a bean-to-bar (or bonbon) chocolate shop evolved into a destination for Houston-area barbecue fans — a happy byproduct of the owners — brothers Scott and Greg Moore and Michelle Holland — making use of the still-hot barbecue pits after roasting cacao beans. The award-winning (and occasionally imitated) Chile Relleno Sausage is extremely popular, but they also make kielbasa and “Le Boudin” — all of which can be purchased either at the restaurant or the Tejas To Go Market located around the corner. They will also ship if you can’t make it to Tomball.

Davila’s BBQ, 418 Kingsbury, Seguin: Chef/owner Adrian Davila can trace his roots to pre-Texas Mexico. The barbecue shack that he owns with his brother Edward was opened in 1959. The all-beef Mesquite Grilled Hot Links are hot guts-style sausages with Latin flavors.

Derek Allan’s Texas Barbecue, 1116 8th, Fort Worth: Relative newcomers Brittany and Derek Crudgington set themselves apart by smoking Texas Wagyu beef. Since opening in 2017, the restaurant has been selling out of meat before closing time. Avoid the lines by ordering Wagyu All Beef Handmade Sausage online. It’s made with ancho and chipotle chiles, cheddar cheese and Wagyu brisket trim.

Doc’s Hot Links, 208 South Wood, Gilmer: Authentic grease bombs can be ordered online from this northeast Texas joint. Made to be eaten with saltine crackers and Doc’s signature Hot Sauce, these East Texas-Style Hot Links have kept the tradition alive since 1969.

Kreuz Market Barbecue, 619 North Colorado, Lockhart: Jesse Swearingen opened this meat market in 1875. The original-recipe sausage, which made with a 110-year-old German recipe, is among those that be shipped straight to your door. For a little spice, try the Jalapeño Sausage.

Louie Mueller Barbecue, 206 West 2nd, Taylor: Louie’s has been ranked first or second in Texas Monthly’s “best of BBQ” list since 1975. The hand-mixed sausages are stuffed on site. Wayne Mueller is the pitmaster and grandson of Louie Mueller, who opened the pit in 1949. Choose from original beef or jalapeño beef, both of which are made with Black Angus.

Southside Market and Barbecue, 1212 Highway 290, Elgin: Started in 1882 as a horse-drawn wagon that sold meat door-to-door, this joint is now one of Texas’s premiere barbecue destinations. Its Fresh Original Beef Sausage claims the moniker “Elgin Hot Sausage,” and a hot guts-style sausage stuffed in natural pork casings served in a rope. It measures approximately 44 to 48 inches long and weighs 2 pounds.

Did we name your favorite sausage for backyard barbecues? If not, leave a comment or shoot us an email and tell us your favorite!