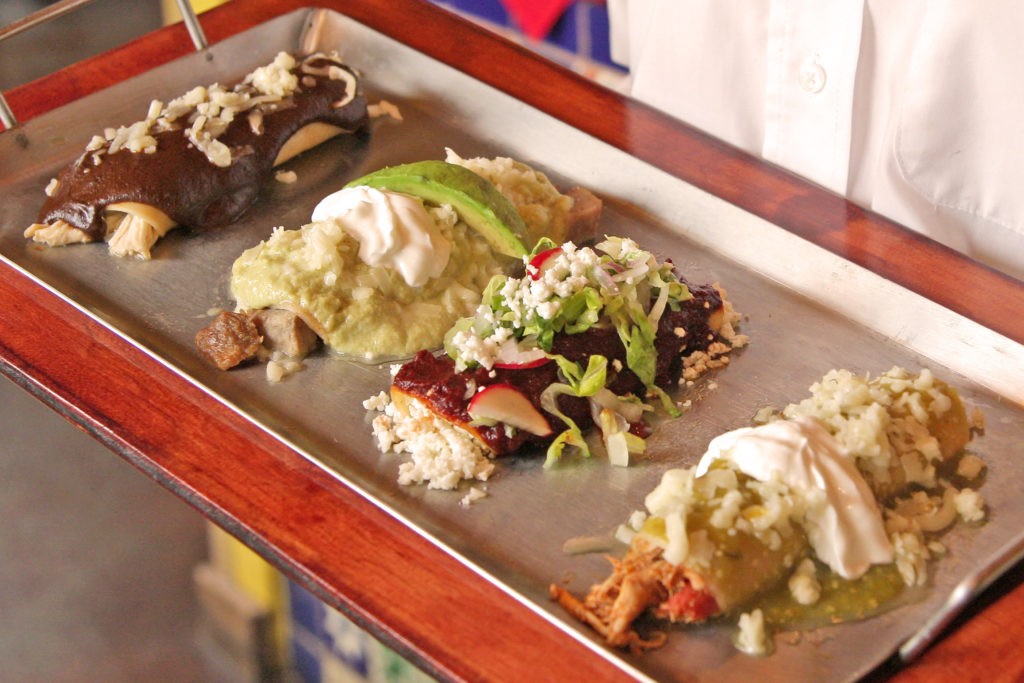 When the weather is chilly, a plate of hot, saucy enchiladas really hits the spot. Sylvia Casares of Sylvia’s Enchilada Kitchen has created plates of these that are more interesting than the usual combo platter

All three Sylvia’s Enchilada Kitchen locations offers two different “Enchilada Culinary Tours”; “flights” of four enchiladas each. The “North of the Border” assortment focuses on variations found in Texas while “South of the Border,” brings together four made with some traditional Mexican ingredients.

The North of the Border assortment includes:

Here’s what’s on the South of the Border platter:

Four full-size enchiladas would be a lot for most people to consume, so Casares instead makes the enchilada samples half-size. Each are about three bites apiece; enough to get a good taste.

Casares’ newly published work, The Enchilada Queen Cookbook, includes several more recipes for enchiladas and other dishes, as well as explanation and regional information for the types noted above. For example, the Laguna Madres enchilada is seafood based because, according to the book, the lagoon of the same name “is a breeding ground for Gulf Coast fish species such as sea trout and redfish, as well as shrimp and crabs.” Even the time-strapped might find it satisfying to read about the various enchiladas and then be able to go out and actually try them—you don’t even have to cook, just read and eat.

Each enchilada flight is $16.95 (plus tax and gratuity) and comes with rice and either charro, black or refried beans. We tried the black, which Casares proudly declared “actually have flavor” and aren’t bland like other places. These are indeed well-seasoned with just the right amount of garlic, onion and salt.

It’s a comforting yet interesting dinner to warm up with, and available at all three Sylvia’s Enchilada Kitchen locations: 6401 Woodway, 1140 Eldridge and 12637 Westheimer.