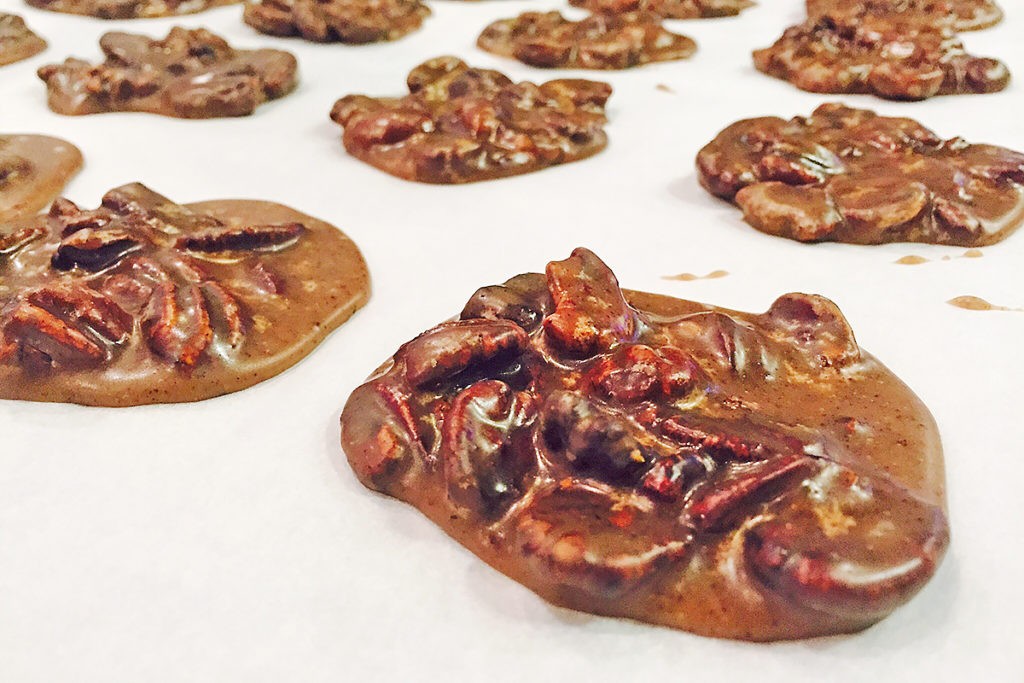 Houston candy purveyor Eat My Pralines has no storefront, but has found a growing market anyway.
Photo by Becca Reyenga

We had to clear one issue up with Eat My Pralines owner Becca Reyenga right away: is it pronounced “pray-leens” or “praw-leens”? “It’s ‘praw-leens.’ That’s a conversation I have a lot!” she said. “Sometimes I say, ‘Do you want to try a praline?’ and people just look at me like they don’t know what I’m saying.”

Reyenga founded Eat My Pralines after working a position in the oil and gas business that meant being in a cubicle all day. “I’d already started this [praline] business, which was picking up and I was like, ‘I’m going to do something I really want to do. This is growing and I don’t want to be stuck in a cubicle so I’m going to try this full time.’” Since making that decision in 2015, sales have grown and the business just won an Edible Houston “Local Hero” award in the Food Artisan category.

She learned how to make great pralines from her mom, Ruth Ann, a native of Natchitoches, Louisiana. “My mom is an excellent cook. She perfected the praline recipe and has been making them for years,” explained Reyenga. “That created word-of-mouth around her friends’ circle. That was part of the attraction to start a praline business. She had so much response at that point from people just loving the pralines. She’d take them to parties, church events or whatever and people just couldn’t get enough.”

Eat My Pralines does not yet have a storefront. Reyenga makes them in a commercial kitchen and sells the sweet treats primarily at farmers’ markets, as well a few other venues that include Mercantile Montrose and the Antone’s Famous Po’ Boys kiosk at Greenway Plaza. She also occasionally hosts pop-ups at Boomtown Coffee. The current schedule can be found at the Eat My Pralines web site.

Customers seeking corporate gifts and wedding favors buy the pralines in big batches. “A lot of real estate agents will have them at open houses individually wrapped with their business card attached,” added Reyenga.

The delicate candies can be purchased online at the Eat My Pralines web site. The selection includes not only the traditional crisp kind (which get all the flavor needed from European-style butter, toasted pecans and heavy cream) but also espresso pecan (which incorporates Boomtown Coffee’s Spindletop blend), almond coconut, almond cocoa and walnut ginger.

In addition, Reyenga not only considers customer requests for new flavors—she embraces the challenge. “I like it when people suggest flavors that they like. I love customizing things. Last week, I did a praline with peanut M&Ms, which was really good!” she said. For Saint Patrick’s Day, she’s working with local chef Jason Kerr on a pistachio honey variant.

What’s next for Eat My Pralines? For now, Reyenga is content staying small. “People ask me if I’m going to go on [small business reality shows] “Shark Tank” or “Billion Dollar Buyer.” That sounds like fun and a nice rush of adrenaline. It’s great marketing exposure for the business but I just don’t want to be that big. I want to be able to continue supporting myself but I like the smallness of it. I like the localness of it. For the brand itself, it needs more time to be recognizable. I’d like to have a little coffee shop one day—simple food done really well—and a storefront for Eat My Pralines.”

In the meantime, those who want the delightful experience of enjoying one of Reyenga’s pralines alongside a cup of coffee will have to either place an order online or visit a third-party venue.