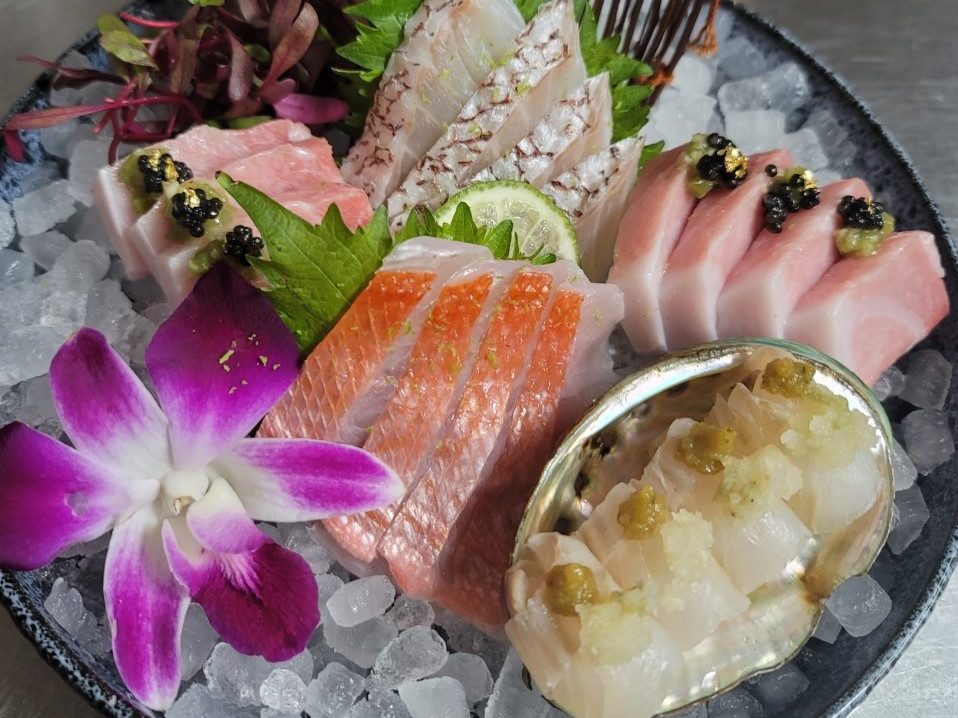 At first glance, Umami Japanese Restaurant could be just another sushi joint in the suburbs, serving the usual rolls and nigiri. However, owners Jennifer and Jessica Park (no relation) aim to bring a different standard to sushi outside the loop. Their restaurant is in the corner of a small shopping center at 18921 University in the community of Riverpark, located on the southwest side of Sugar Land.

The two friends met in Las Vegas while working as servers at Kame Omakase, making them no strangers to high-end Japanese dining. When Jessica relocated to Sugar Land in 2019, she quickly noticed the lack of sushi options in the neighborhood and called Jennifer. In a bold move, they took over a space that had housed a Chinese restaurant and opened in January of 2021, in the middle of the pandemic.

Unfamiliar with the area and the local food industry, they recruited friends from Las Vegas and the West Coast to join their venture and advertised locally. One of those advertisements was answered by none other than chef Yoshi Katsuyama, who is currently making news himself with the opening of his new restaurant, Aya Sushi. Now, executive sushi chefs Samuel Choi and Alexandre Choi are at the helm. The two Brazilian-born, California-raised brothers honed their skills in prestigious restaurants in Las Vegas and Hollywood before making the move to Texas.

Umami prides itself on importing the freshest fish, including bluefin tuna from Spain, shima-aji (striped jack), ji-kinmedai (golden eye snapper), kanpachi (amberjack) from Japan, uni from Santa Barbara or Hokkaido (whichever they deem to be of best quality at that time) and hirame (flounder) from Jeju Island. Some of these cuts are offered in crudo and carpaccio dishes, such as the kanpachi with soursop, cherry tomatoes and Asian pear and the madai (sea bream) with tangerine, passion fruit and olive oil.

Umami also serves a large selection of specialty rolls, or what they call “Extraordinary Rolls”; including the LJ Pkwy roll (the name a fun nod to where they are located) consisting of spicy salmon, serrano, cucumber, masago, ono, avocado with a spicy garlic ponzu sauce. The hot food menu features a small selection of robata and “Creations,” which include miso black cod and braised Wagyu short rib. Jennifer says that most of their starters and hot food are made in house, where they dedicate a full day each week to prepare the sauces alone.

Along with wine, sake and cocktails, they also offer at least 10 varieties of loose-leaf tea, because they believe tea is an integral part of the Japanese dining experience. The dessert menu includes the standard gelato and sorbet but also boasts molten chocolate cake and the signature Green Tea Panna Cotta with Strawberry Mousse. Lunch features bento boxes starting at $15 and a three-course “Decisions” menu that includes an appetizer, starter and an entrée starting at $17.

Jennifer and Jessica did their research and visited many well-known sushi restaurants in the Houston area. While they know that Sugar Land may not be a dining destination yet, they hope that people will venture out and try a small, cozy, neighborhood spot that wants to compete with the big guys.