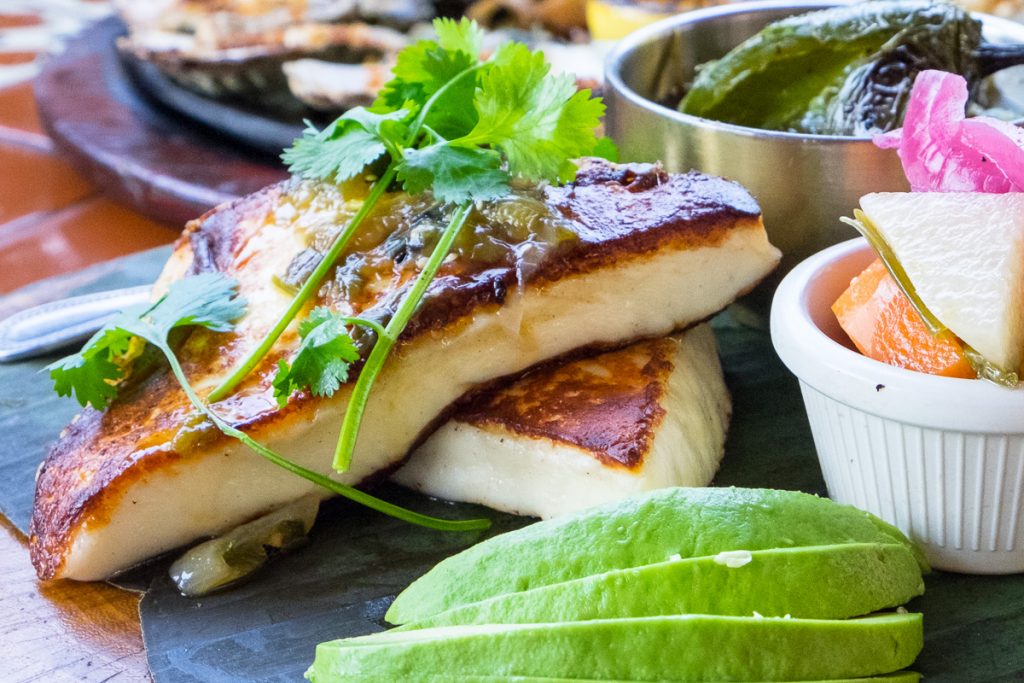 Thick, wood-grilled slabs of panela cheese at The Original Ninfa's On Navigation. Photo by Phaedra Cook

Let’s be real: when diners head to The Original Ninfa’s On Navigation, they’re probably driven by cravings for Tex-Mex classics: fajitas, enchiladas and tacos. However, in mid-2016, the installation of a wood-burning oven opened up new options—and a bevy of meat, seafood and even cheese dishes ideal for the smoky kiss of fire.

For that reason, diners ought to temporarily place their Tex-Mex cravings on the back burner (or, better still, placate them with a side of enchiladas) and steer their entrée order towards the surprisingly elegant options on the seasonal menu. We were invited to try some of these and found there are some remarkable winners.

For starters, here’s a new kind of queso on the menu. Unlike the orange, creamy and beloved Tex-Mex kind, the Queso Asado is comprised of big wedges of panela, a Mexican cheese with a delicate texture that still holds together when heated.

The wood-fire gives the cheese slabs dark, golden sears on both sides. Accented with a light tomatillo salsa, the Queso Asado is served with corn tortillas. Tangy pickled vegetables are served alongside, as is chile toreados: blistered green jalapeños that speak more of smoke than of real heat thanks to being mostly de-seeded.

The Spicy Baked Oysters are perfect for sharing and get a ton of addictive crunch from the well-toasted breadcrumb topping. These don’t require the generous scattering of jumbo lump crab on top—but it’s not like it hurts, either. A dab of chili oil lends just a touch of spice. Beyond that, nothing else is needed save perhaps a few droplets from the provided charred lemon half.

Alluring, thick slices of venison loin will take diners on a surprising culinary turn. This dish showcases the fact that longtime chef Alex Padilla isn’t just a keeper of classic Tex-Mex recipes—he’s a great chef in general who is skilled in many cuisines. Served with braised purple cabbage alongside, drizzled with creamy garlic sauce and accented with a bit of bacon jam, the venison loin comes across like a dish that a European hunter would settle in to eat by the fire after a long tromp through the snow.

Germanic influences in a Mexican restaurant are not at all farfetched. Germans started settling in Mexico, especially in the Mexico City, Veracruz, the Yucatan, and Puebla, in the 1800s. Their contributions to Mexican cuisine include helping perfect brewing and cheese making.

The Wood-Oven Roasted Lamb Tacos also break out of the proverbial box, with pomegranate pico de gallo and garbanzo purée on the side. It isn’t going to win any beauty contests, but it’s still a must-try dish. (Some of the most delicious concoctions in the world—many Tex-Mex dishes, for example—are revered for flavor, not their good looks. A generous coating of adobo paste, garlic and ancho chile lends silky smoke to rich, falling-apart tender lamb. Grab a corn tortilla, slather it with the garbanzo purée, add a generous dab of the inventive pomegranate pico, top it off with juicy lamb and go to town. It will be one of the best bites you’ve had in weeks.

Diners are an important part of keeping restaurants from growing stale. When classic stand-bys offer something new and inventive, give it a chance—even if that means putting off the standard Tex-Mex fix for the next visit. It’s likely one of the new wood-fired dishes might join that must-have order.