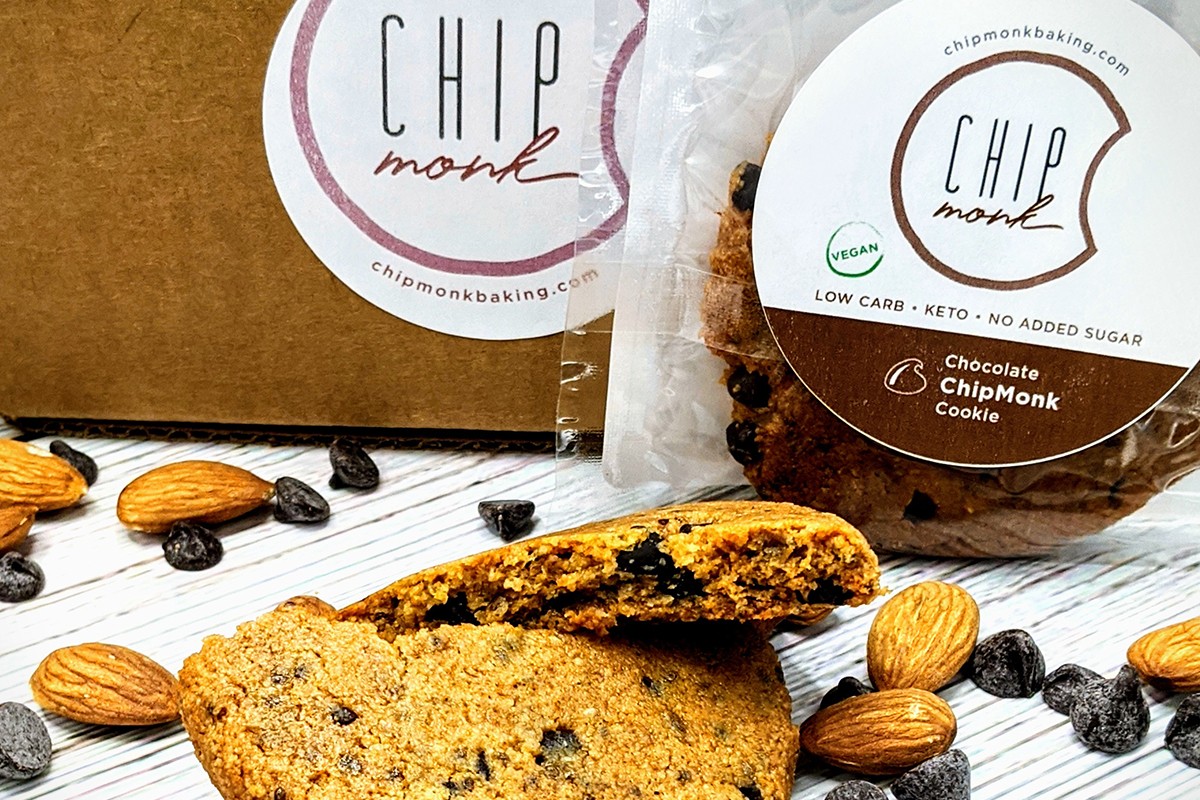 “Healthy treats” always sounds like an oxymoron. Either it’s a treat worth abandoning all virtue for, or it’s not worth eating. However, some people, such as those fighting diabetes, don’t have a choice, yet still deserve treats. Others just want a healthier option. To meet these needs, Houston business ChipMonk Baking, which was founded by Jose Hernandez and David Downing, has crafted cookies that are sugar-free, low-calorie, keto-acceptable and gluten-free friendly (although not necessarily appropriate for those with celiac disease, as the bakery shares a venue with a company that uses gluten).

I’m the type of person who wants enough chocolate, sugar and pastry to sate my cravings, but I’m also willing to try just about anything once. So when I was offered a sample pack of cookies from this new, online bakery (that doesn’t yet have a brick-and-mortar storefront), I said, “Sure, why not?”

As I noted on a recent Houston Restaurant News podcast episode, my expectations were low. Cookies made with guilt-free ingredients are too often dry, flavorless or have a weird texture — or sometimes all three.  Thankfully, that wasn’t the case with Chipmonk Baking’s offerings, which are the result of Hernandez’s own struggle with finding treats that are acceptable for him to eat. When Hernandez was diagnosed with diabetes, he began following what was essentially a high-fat, low-carbohydrate keto diet. After two-and-a-half months, his blood sugar fell back to a normal range. (You can read more about his diet on the ChipMonk Baking blog.)

In line with that approach, ChipMonk Baking’s products use alternative sweeteners: specifically monk fruit extract (which thankfully lacks the aftertaste of other alternatives and is also good in smoothies) and allulose, which can be thought of as a relative of fructose. They share the same chemical makeup but allulose has a different structure — one that apparently limits its absorption into the the blood stream. (For those who want to take the deep-dive, the ChipMonk Baking website has a page dedicated to explaining both monk fruit and allulose.)

While ChipMonk Baking’s cookies lack traditional sugar, there’s no dearth of butter — which is part of why they’re still so flavorful. With the exception of the Sunflower Brownie Bites, all the products are made with almond flour, which also adds depth to the flavor. The lack of gluten results in soft, chewy cookies and brownie bites rather than crisp ones. I didn’t mind. The texture comes across as “freshly baked.”

I tried the Red Velvet Brownie Bite. Historically, I avoid red velvet cake because that pretty red color comes from food coloring. It’s not that I’m concerned about FD&C Red. It’s just that adjusting the color seems a little pretentious. However, I was very happy to overlook my own prejudice because these brownie bites were packed with plenty of dark chocolate flavor. A single bite has 80 calories, seven grams of fat, two grams of saturated fat (hello, butter!), no trans fat, eight grams of carbs, less than a gram of sugar and even a gram of fiber. Fiber helps with the feeling of satiety, so only one or two of these was a perfect little snack. I also loved the nubby, loose texture, which was likely created by the sunflower seed flour.

Onward to the cookies: the flavors include Chocolate ChipMonk, Coconut, Lemonk Lemon (lemon poppyseed), White Chocolate Macadamia, Peanut Butter and Cinnamon Snickerdoodle. While they were all winners, the first four in that list were my favorites. I’m very picky about chocolate chip cookies but ChipMonk Baking’s signature version was chocolatey enough to satisfy. I’ve always loved coconut, so that one was a shoo-in. The surprise was the lemon poppyseed, which gets plenty of perk from a triple-hit of lemon zest, juice and extract. I had only one to try but I could have easily consumed a whole box.

In fact, I’d reorder those along with the other three cookies that top that list and I’d add the Red Velvet Brownie Bites to my order. In addition, I’d love to try the Chocolate Espresso Brownie Bites. If you would like to try them as well, a variety pack that lets you try all the baked goods — six cookies and one bag each of three brownie bites flavors — is $44.99, and shipping is included.

For those who want to save some dough (so to speak) and bake at home, dry mixes for some of the cookies and brownie bites are available for $14.99 each, or save $5 on the purchase of two. Bakers who want to try their hands at their own sugar-free pastries can also purchase bags of ChipMonk Baking’s custom monk fruit-allulose alternative sweetener blend.

On a final note: especially when it comes to products that claim to be “healthy”, providing generous quantities of reputable information and research is important. The ChipMonk Baking website has plenty for anyone who cares to read, from full lists of ingredients and nutritional information to blog posts that cite sources. Those who have to avoid certain ingredients and are mindful of what they eat will likely appreciate this effort to build trust, as well as a fan base.

Houston Food Finder is at Luce Coffee Roasters.7 hours ago
Luce Coffee Roasters
🥤Grabbing a coffee in Houston is a lot of fun thanks to the wide variety of experiences available. Choose from casual hangouts for studying, grab a brew on the run or sign up for specialty coffee classes to improve your own prep game. Most offer thoughtful eats, too, along with beans, equipment and more. Ryan Kasey Baker shares the best spots in town.