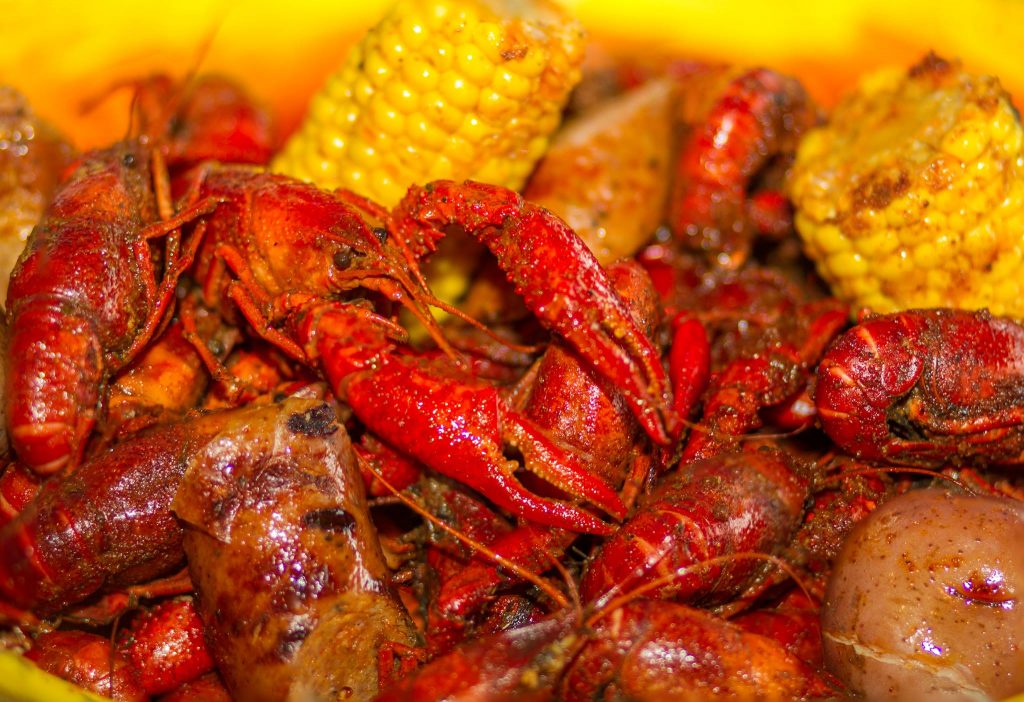 Shell Shack offers a crawfish boil when it is in season. Photo courtesy of Shell Shack.

A Houston outpost of Dallas restaurant Shell Shack is now open at 2412 Washington Avenue and features seafood boils, oysters and sandwiches. It’s in the former Social Junkie location, which was extensively remodeled. The changes include a two-story outdoor patio, an elevator, 24 televisions located throughout the restaurant and a bar on each level. Houston Food Finder was invited to “take a crack” at the restaurant’s signature dishes.

One of those signature dishes is the crab-stuffed tater tots, baked to a hot and crunchy exterior balanced with an almost-creamy interior of crab meat. An order of six averaged-sized tots is $6.99 and includes the choice of two housemade sauces: cocktail, tartar, ranch, blue cheese or honey mustard. Additional appetizers include crispy calamari topped with peppers for $9.99 and breaded crawfish tails for $10.99.

Shell Shack is perhaps most notable for its custom seafood boil prepared tableside. First, diners choose a base of crab (king, snow, dungeness or Bairdi), shrimp or crawfish (the latter available when in season). Of that list, one item should be of particular interest: Shell Shack is one of few restaurants to serve the Bairdi crab, which is prized for its sweet and succulent flavor and delicate texture. The harvest season for the Bairdi crab is relatively short, but Shell Shack made arrangements to ensure that guests can get this tasty crustacean year round. Next, guests pick a marinade — Cajun, garlic or lemon pepper — or choose the Kitchen Sink, which is a combination of all three. Finally, diners choose the heat level, which ranges from none to the super-spicy diablo.

The boil also includes sausage, potato and corn, additional servings of which are available for an additional cost. Once all of the ingredients are combined in the bag, the server shakes the contents so that each component is thoroughly coated in seasoning. Then, the seafood is poured onto a tray or directly onto the table, depending on the guest’s preferences. Inevitably, there’s a  mess involved when dining on such a spread, so Shell Shack provides bibs, plastic gloves and a special a high-tech hand-washing station. Simply insert your hands and the machine magically scrubs any remaining seafood-y bits right off. Guests can bypass the mess altogether by ordering the boil “Uptown Style.” In this case, the staff de-shells the crabs and shrimp prior to service, which increases the price by $5 per pound.

Keep in mind that the seafood is set at the daily market price and priced by the pound, which means the costs can add up. On the night we visited, prices ranged from $10.99 for a half-pound of shrimp to $33.99 per pound for king crab.

“It’s been exciting to see how quickly Shell Shack has grown in the DFW area,” said Shell Shack director of operations and partner Larry Garrett. “We can’t wait for Houston to experience this concept, and we look forward to serving up fresh seafood with a heavy dose of local hospitality.”

The ambitious company expects to open a second location in Katy in early 2019 and follow it with eight Houston-area locations over the next four years.