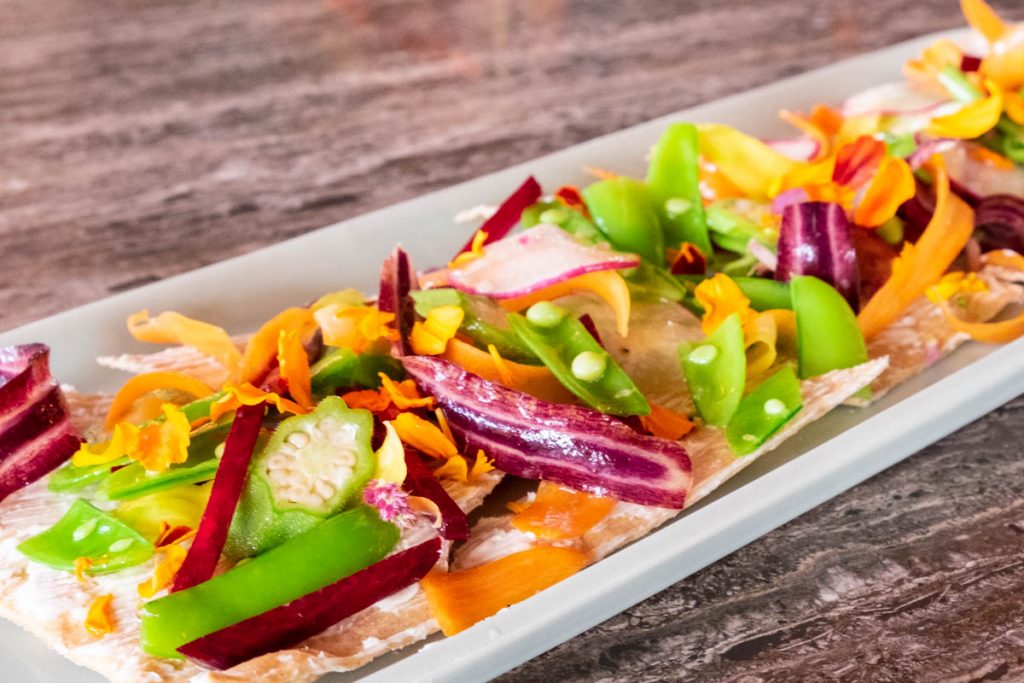 Before it closed to be remodeled and turned into steakhouse Georgia James, Underbelly often had a bustling lunch crowd. Next door, sister business The Hay Merchant took over lunch service after Underbelly’s demise, including some of the classic favorite dishes such as the fan-favorite Korean Goat Dumplings. Undeniably, though, not everyone wants to dine in a beer bar and it’s also not necessarily the ideal venue for a business lunch. Fortunately, as of this week, new restaurant Rosie Cannonball at 1620 Westheimer has filled the “nice lunch spot” needed in Montrose. (Sadly, none of Shepherd’s other restaurants — One Fifth, UB Preserv or Georgia James — are open for lunch.)

Rosie Cannonball is helmed by executive chef Felipe Riccio, business partner Peter McCarthy, June Rodil and David Keck. Those last two are some of the city’s few master sommeliers (as minted and declared by the rigorous Court of Master Sommeliers). Riccio lived and trained in Milan for several months – and the influence is very clear in the menu, for lunch or otherwise.

Keeping ingredients simple, natural and visually appealing is a core precept of the Italian way, and that’s particularly clear in the Carta di Musica. Named for sheet music, the dish is a crispy flatbread not quite as thin as a sheet of paper, but appealing nonetheless. The visual mind-blower, though, is the wealth of raw, fresh vegetables that come straight from the company’s garden in Bellville: whisper-thin vertical slices of carrots in many colors, buttons of raw okra (did anyone else know raw okra is actually pretty good?) and snap peas that live up to the name, just to name a few. The crisp bread gets a slather of butter to enliven what could otherwise be a too-pure dish.

As winter sort of seeps into Houston (whether it be “spring-like” or “ice storm”), the Rigatoni Di Mancini friarielli pesto (“friarielli” is the Italian name for rapini or broccoli rabe), smoked ricotta and bread crumbs fried in butter. (There’s a place in this world for butter-fried bread crumbs, and it’s called mi boca.) The dish is $18 and an argument for bringing a friend – because the portion is extremely generous. In fact, that may be my one little gripe about Rosie Cannonball’s lunch menu – the generous portions make it hard to dine alone and still cruise through multiple dishes. Either way, the rigatoni was a nice little ride — kind of like one one of those small, curvy rollercoasters for the timid before they work up the courage to get on one of those horrible rides with a 90-degree drop — but I digress. The big pasta tubes are substantial yet tender, then the slightly herbaceous rabe pasta comes through. After that is undeniable preserved lemon (much needed to brighten the pesto) and then an extremely satisfying crunch from the buttery bread crumbs. Want more dishes? Check out Beth Levine’s first dinner time visit.

The bar service on my visit was mostly handled by the very capable Avery Davis, who you may have spotted over the past several years at Blacksmith. That means that he can brew one of the best lattes you’ve ever had — or make a perfectly balanced Safe Harbor Sour with rye, charred grapefruit and lime. While that cocktail makes an amiable companion for just about any meal, the kind of libation selected is totally up to you. Rather than asking Keck for a wine recommendation for the diverse flavor notes of the rigatoni — which would make simply it too easy — I threw Davis the curveball and wasn’t displeased with the dusky, berry-forward Tiberio rosé from the Abruzzo region that he chose.

By my estimation, two people can have lunch at Rosie Cannonball, each with an alcoholic beverage and two substantial shared dishes, for about $30 per person. On a final note, the bar area, with a perimeter outfitted with electrical outlets and purse hooks is ideal for laptop-wielding nomads. I should know, as this article was written on-the-spot.