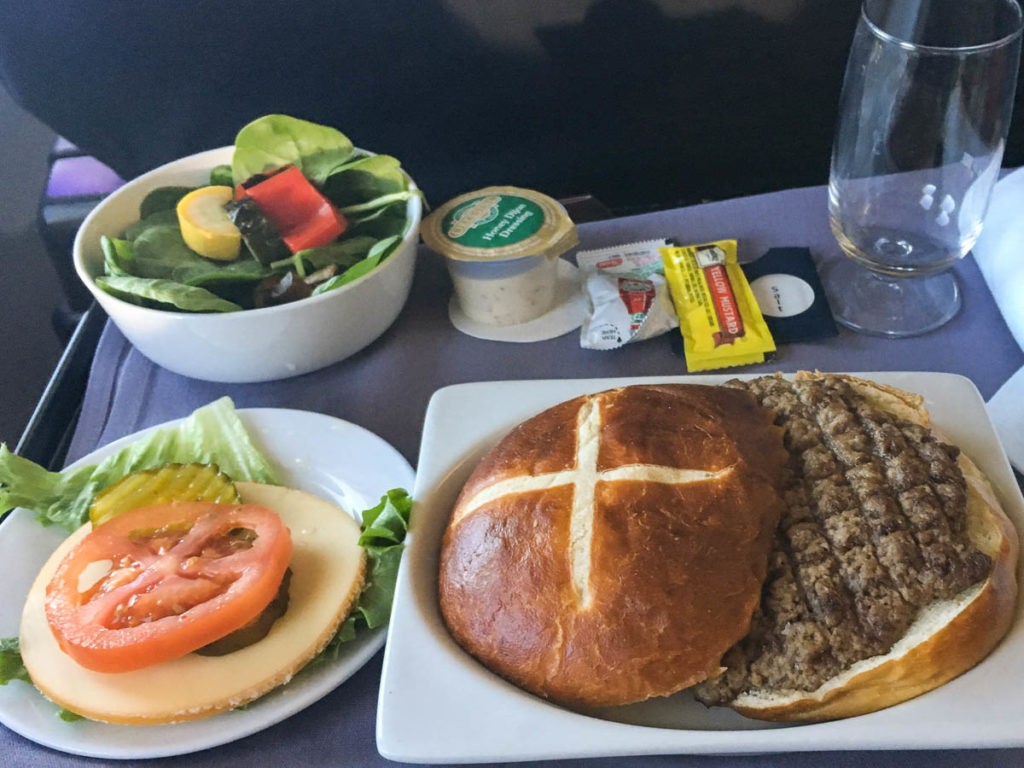 A burger and side salad served in the first class section on a United Airlines flight.
Photo by Phaedra Cook

For the first time in my life, I flew first class last week on a United Airlines flight from San Diego to Houston. The extra expense has never seemed justified. This time, though, a confluence of date, time, award travel availability and 25,000 United miles landed a plushy window seat with spacious legroom on a Boeing 737-900 (a very standard kind of jet). The ticket included dinner, cocktails, beer and wine. Finding out what a first class meal was like—well, it didn’t exactly “satisfy” but it at least sated my curiosity.

One of the best things about being a first class passenger is that your first drink is served before takeoff. Within minutes of taking my seat, I was nursing my traditional flying beverage, a bloody mary. It was made with the same ingredients that are served in economy: Mr. & Mrs. T’s mix and Tito’s Vodka in a plastic cup. Once the plane hits cruising altitude, subsequent beverages are served in actual glassware. That was a treat.

In the first class section, a flight attendant mixes the cocktail and doesn’t just hand the guest a can and a little bottle of liquor. My drink was fine, but I wondered: what if I didn’t like the way the flight attendant mixed it? Oddly enough, that is one task I prefer doing myself.

United promises “restaurant quality meals” and promotes The Trotter Project, “an ongoing collaboration” with “Charlie Trotter-affiliated chefs” that will “offer customers exciting new menu options on flights.” (Trotter, a highly acclaimed chef, died of a stroke in Chicago in 2013. He was only 54.)

On my flight, those “exciting” menu options were a chicken salad or a cheeseburger. I misheard the word “salad” at first, mistaking it for “salmon.” The flight attendant corrected me with a sympathetic smile and I felt my anticipation wane a bit. I didn’t know Trotter, but I think he might have been disappointed.

I chose the cheeseburger, as did the man sitting next to me. Based on his deep snorting for the duration of the journey, he needs one of those procedures where they Roto Rooter your sinuses. Either that, or it’s time to stop doing cocaine.

Warm, salted, mixed nuts and wine was served before the meal, along with an inoffensive Pinot Grigio with sufficient acidity to satisfy. That may have been my favorite part of the experience. Another attendant accidentally refilled my glass with an equally sufficient Pinot Noir and immediately realized his error. I reassured him that it was perfectly fine. I was going to switch to red when the burger showed up anyway. 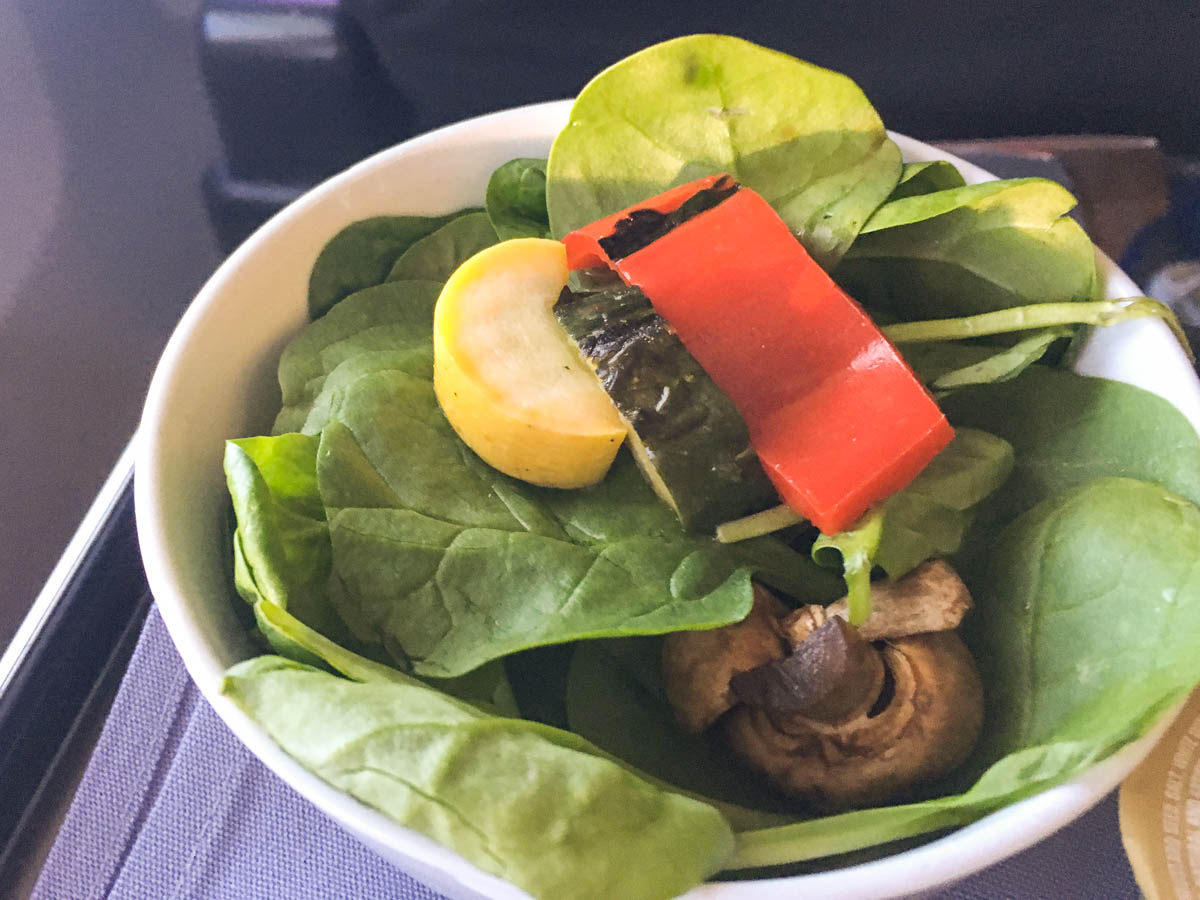 The dinner tray arrived and the food had that odd, mass-produced look about it. The color of the burger meat seemed a little gray, with criss-cross marks that seemed born more of manufacturing, not a grill. It was on a lifeless pretzel bun with an over-moist, steamy interior. The lettuce, tomato, pickle and thick slice of lightly smoked gouda on the side held a little more promise and, while not a saving grace for the meat’s abnormally soft texture, at least added a point of interest.

Perhaps strangest of all were the single chunks of yellow squash, slightly withered zucchini and red bell pepper on top of a passable spinach salad with mushrooms. The red bell pepper, with one harsh grill line, immediately reminded me of a rectangular Lego block drawn on with a black Sharpie marker. It’s as if the vegetables were stored in a cool, dry environment that sucked the excess moisture out of them.

I enjoyed flying first class for the cushy seat, extra legroom and unlimited booze. I am not, however, a convert and I won’t be casting a longing gaze up the aisle, wondering what’s behind the curtains.

My next flight will be coach as usual. I’ll likely have my traditional bloody mary and United’s Tapas snackbox with hummus, olive oil crackers, olives and other junky goodies. There will be no jealousy whatsoever of what the denizens in first class are enjoying as a meal. I think I now have a pretty good idea.