Review: Waiting For The Magic At Le Colonial 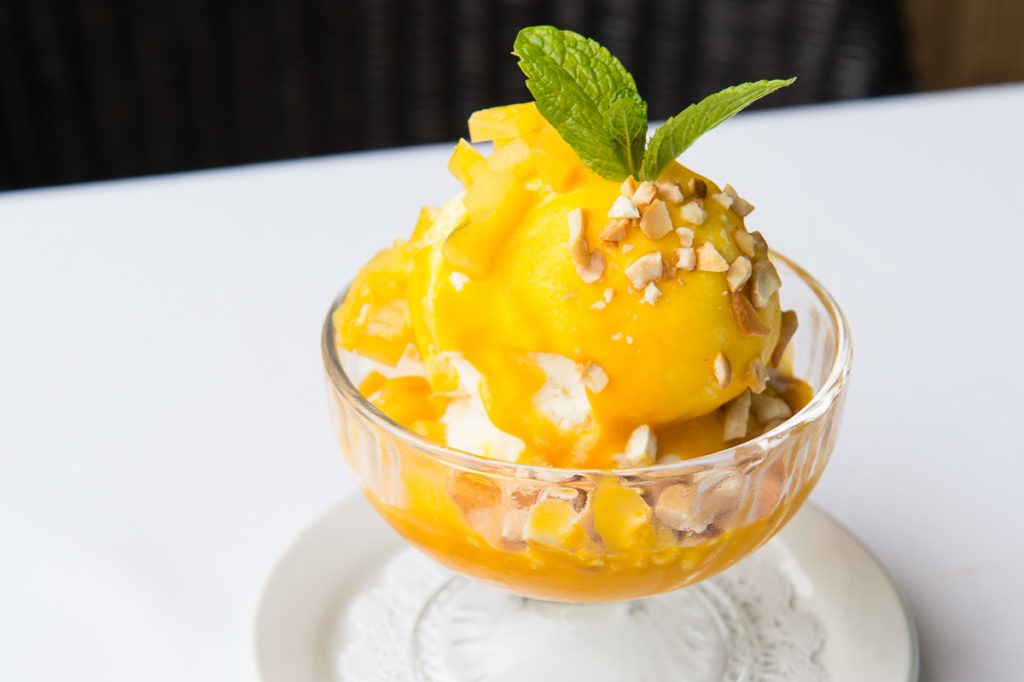 The sunny color of the namesake dessert at Le Colonial, the Mango Sundae, accurately predicts its bright flavors. Photo by Chuck Cook Photography

Diners who prize setting and service over value might find favor with classy and well appointed Le Colonial, rich in hardwoods, shutters and vibrant murals. Unfortunately, we didn’t find enough magic in the pricey dishes to want to return. (It is worth pointing out, though, that the prices are modest compared to other restaurants in the River Oaks District shopping center.) The concept, which romanticizes the period when Vietnam was under French rule, is an uncomfortable distraction.

If we did go back, we’d order the Goi Bo, a delicate mesclun salad with thin slices of seared beef, in a heartbeat. The namesake sundae is a sunshiny delight of vanilla ice cream topped with mango purée, accented with more mango in its fresh, chopped form and roasted cashews. Our favorite large plate (or bowl, if you must be technical about it) was the nuanced green curry ($27) that sported fresh Gulf shrimp and a unsubtle peppery bite.

The staff constantly recommends the Banh Uot ($13) and we’re not sure why. It’s a scanty amount of finely chopped dry bits of ribeye rolled up in rice paper. Also, give the bland yellow curry with chicken a wide berth.

I love cheap eats as much as the next person, but I’m also a big believer in “you get what you pay for.” So, forking out over $100 for lunch or $200 for dinner for two (including a cocktail for each, appetizer and dessert) doesn’t necessarily exclude a restaurant from places I’d return to. However, at those prices, the food had better be pretty magical.

Hence the problem at Le Colonial, where most of a meal time is spent waiting for the magic to happen, although a few dishes show some spark, and cocktails are enticing.

To say that Le Colonial has found its fan base is an understatement. There’s a full house every meal period, even on Monday nights—which are typically slow for most restaurants. Upstairs is a lounge full of plushy chairs and low tables that were mostly commandeered by tipsy, loud, middle-aged women. (Yes, on a Monday night.) There was an impromptu sing-along when “Don’t Stop Believin’” by Journey came on the overheads. In the ladies’ room, a young woman explained to her friend, “It’s like Hard Rock, but for older people.” Fortunately, the dining room atmosphere is more refined than the lounge.

Service at Le Colonial is extremely good as long as the staff isn’t in the weeds, as they were one Saturday afternoon. They are a hard-working, congenial and attentive bunch.

When you sit down to order, be aware that someone will try to sell you a bottle of water. If you’re not an H2O connoisseur, specify “tap” or “plain” water. Asking for “still” will result in Evian being brought to the table—already opened, of course, to ensure that it’s awkward to send it back.

Servers will recommend that each diner order a small plate and a large plate—and that is generally good advice although another option is to order three small plates, which are consistently good. Our favorite was the delicate, vibrant Goi Bo, a mesclun salad sported thin slices of seared filet with brilliant ruby red interiors. It shone under a perky jalapeño vinaigrette. It was $15 and the graceful dish seemed worth the price.

The Bánh ướt ($13), which means “wet cakes,” is another starter that was consistently recommended by servers but even after trying it twice we weren’t fans. It consists of rice noodle “crepes” with minced grilled ribeye rolled up inside. The meat was too finely chopped for good texture and it seemed a bit scanty, but the cool cucumber, lettuce and mint alongside were pleasing counterpoints.

Regardless, it was miles superior to the $22 Ga Xao Cari, or yellow curry with chicken. The sole saving grace was the crunchy toasted cashews sprinkled on top. The curry sauce, though, was flat—not fragrant with herbs such as ginger and lemongrass as one might expect. The undercooked haricot vert did it no favors, either.

The Cari Tôm, or Shrimp Curry, was our favorite large plate (well, technically a large bowl). It has more of a Thai pedigree than Vietnamese, but regardless it was exactly the kind of nuanced dish through which Le Colonial can prove its value. Sizable Gulf shrimp are put to good use, along with bamboo shoots, snap peas and zucchini. The verdant curry sauce is everything diners might expect: herbal and with the zing of Thai chiles. At $27, it’s more than twice the cost than at more casual establishments, but it’s unlikely those places would use shrimp from the Gulf—or serve it in such an attractive setting.

The best dessert is the namesake sundae, a sunshiny delight of vanilla ice cream topped with mango purée, accented with more mango in its fresh, chopped form and roasted cashews. The cost of $10 actually seemed quite reasonable for the tangy sweet. Other desserts, such as the Chocolate Mousse Dome, a shiny dark sphere atop a red velvet “biscuit,” seemed like they could have come out of the chilled display case at La Madeline. Even when desserts have to be pre-made, there are tricks to making these seem freshly-made rather than pre-formed and refrigerated.

Cocktails are consistently balanced. A $14 Ginger Blossom with Glenmorangie 10 Year, lemon juice and honey and garnished with shaved ginger, suffered only a little from not being strained properly and having some floating ice chips. A well-executed, classic Sidecar, ($13) with Hennessy, triple sec and fresh lemon juice, fared even better. Note that those prices, like everything else at Le Colonial, are a few bucks above what would be considered average for Houston.

The “elephant in the room” that few have openly talked about is the concept itself. Romanticizing a period where the French ruled and exploited the Vietnamese seems culturally insensitive. Yes, the French brought their culinary wisdom and a European-style education system, but doesn’t mean being conquered by another country wasn’t traumatic.

The ill-fitting, vaguely military-style jackets that the servers wear are a constant reminder of what the restaurant is about and a distraction from the meal. It’s especially weird considering that Vietnamese cookbook author and chef Nicole Routhier has been intimately involved since the first Le Colonial opened in Manhattan in 1993.

Perhaps it is because this is Houston, a city with a large, vibrant Vietnamese population, that makes Le Colonial’s concept seem like a glaring faux pas.

That aside, whether or not a diner will love Le Colonial will depend on what he or she needs to get out of the dining experience. Those who seek good food in a classy (albeit noisy) environment will enjoy the place. However, a diner who cares about getting the most bang for the buck is going to find it hard to choke down the prices.

All costs for this review were covered by Houston Food Finder. Please help us do more of these by becoming a Patreon supporter! You’ll even get rewarded for doing so.