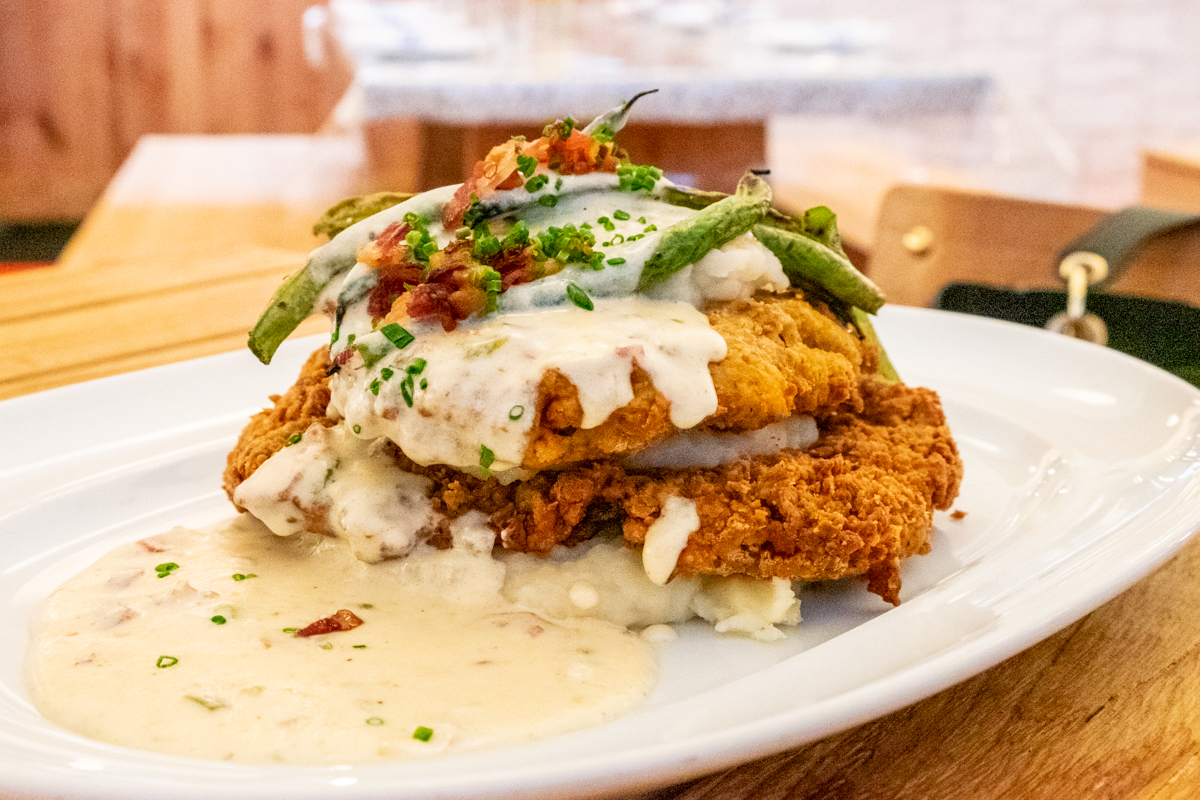 Drive into the parking lot of The Houston Farmers Market, hang a right and head all the way to the back of the building, and you’ll find the newest Underbelly Hospitality restaurant, Wild Oats. While the company name has become synonymous with chef and owner Chris Shepherd, this particular venue is the playground of culinary director and chef Nick Fine — and it’s clear he’s having fun with it.

There’s a stereotype that “Texas food” means big steaks, stuffed baked potatoes, big red Cabernets and not a vegetable in sight. Sure, you can find some of that at Wild Oats, too (there’s probably a law in the books somewhere that you can’t have a Texas-themed restaurant without a chicken fried steak on the menu), but the music on the overheads should tip you off that this restaurant is not a cliche. It’s all Texas musicians, but perhaps you don’t expect “Ride Wit Me” by Nelly (born in Austin) or the “Pepper” by the Butthole Surfers (the band formed in San Antonio). The soundtrack is part of Fine’s way of expressing that he’s wrapping his arms around not only what Texas was, but the culturally rich, diverse state that it is today. Fine’s staff is also diverse, and includes industry veterans Eliseo Rodriguez, who I first met about 15 years ago when he was a server at Monica Pope’s t’afia (he also currently works at Bludorn), and Lisa McCoy, who’s worked for Chris Shepherd ever since the name Underbelly stood for just the original restaurant.

Some of Wild Oats’ special touches are specifically about Houston. There’s a cleaver from Underbelly hanging above the kitchen door. A neon light representation of the Astrodome that hangs above the wine room came from recently shuttered beer bar The Hay Merchant. We were invited in to try the selections, and paid a visit in mid-February. On the menu, the Haven Shrimp Corn Dogs are an homage to chef Randy Evans’ long-closed but beloved restaurant, Haven. Fine used to be Evan’s sous chef when they were at Brennan’s of Houston. “I talked to Randy about it, and he said, ‘Do yourself a favor. Ours were battered and skewered. Do yourself a favor; ditch the skewers and just batter them and deep-fry them,’” said Fine. And so it is: the plate arrives with four large Gulf shrimp, battered and fried until golden brown and allowed to remain in their gentle, natural, curled shape. It’s the type of appetizer that everyone will want two of, and a lone diner will happily devour the entire plate.

Also on the appetizer side: I was thrilled to see that Wild Oats has parisa, a dish rarely found on Houston menus. Listed on the menu as Medina County Steak Tartare, it’s chopped sirloin with fresh peppers and onions (in this case, more delicate shallots are used) and cured in lime juice (which is why it’s also called “cowboy ceviche”). The unusual component is finely shredded cheese — in this case, redneck cheddar. Wild Oats serves its version with house-fried saltines. The combination is meaty, salty, a touch tangy and exceptionally flavorful.

Wild Oats offers chili in a cup, bowl or — a particularly fun way — a shot. Everyone has an opinion about chili, and the meaty-yet-brothy style of this one may be divisive. As Fine pointed out, though, his version is thin enough to actually work as a shot. Guests feeling saucy (and flush with cash) can buy a shot of chili for the house for $99.

The Huevos Ranchero Salad is quite an unexpected presentation. I’m not sure why it’s called a salad. It’s more like a crunchy snack; a haystack of wispy tortilla strips, with some intermingled mint, cilantro and onion — not much vegetable content. Even the included black beans are snackable, thanks to being cooked and then fried. The texture is akin to fried chickpeas. The final touches are a drizzle of hot and tangy Valentina vinaigrette and a cloud-like dusting of a microplaned, hard-cooked egg.

On the statewide nostalgia level: as mentioned, there is the requisite chicken fried steak, but it’s certainly not a standard rendition. Wild Oats serves a tower of two thick Wagyu sirloin steaks on top of mashed potatoes with another layer of potatoes in the middle, another on top and then it’s all crowned with jalapeño cream gravy made with bacon drippings and lanky, smoky, char-grilled green beans. “There’s a trick to getting the crust to stay on the steak, but hopefully we got it down now,” said Fine. It stayed just fine. It’s a substantial but not tough crust, and the steaks remain the star attraction of the dish.

Don’t be too intimidated by the name to order the Texas Sheet Cake. It’s a mini version that’s perfect for two people with a big sweet tooth or four who just need a little something sweet after dinner. It’s a chocolate cake that comes with three DIY accouterments: ganache frosting, sprinkles and chopped walnuts. As soon as the hot cake pan arrived, and the wafting chocolate cake aroma reached my nose, I was strongly reminded of the little cakes I’d made as a kid (always chocolate, of course). These little wonders were called Snackin’ Cakes. A box contained the cake mix, a frosting package and a paper pan. You mixed it right in the pan (with milk, if I remember correctly), baked it, supposedly allowed it to cool (I never did) and put the frosting on it. The Texas Sheet Cake is the homespun, upgraded version.

Underbelly Hospitality’s spirits director, Westin Galleymore (who happened to be onsite the night of my visit tending the frozen drink machines and lending extra hands where needed), has again developed a cocktail list with a personality set to match the restaurant. We tried one of those frozen drinks — the Texas-ish Tea, a riff on a Long Island Tea, with bourbon, dark rum, apricot, lemon and Mexican Coke — and like the original, it’s deceptively friendly. The lemon lends a little more brightness than expected, and the apricot liqueur and cola mask most of the booziness. I stopped after one, but it was tempting to order a second. There’s also a frozen Cadillac Margarita to try. On the unfrozen side, we ordered the Ball Park, another bourbon-based cocktail with Texas pecan, madeira, key lime, brown sugar and egg white. It came off more austere than expected and would have benefitted from a little more brown sugar syrup; pecans can lend some dry, tannic flavors. Otherwise, it’s a sophisticated drink with a silky texture thanks to the egg white.

I told Fine before I left that the fact that there are so many other dishes I wanted to try is the mark of a great menu. My list for next time: queso “with Ana’s famous salsa verde,” Armadillo Eggs (cheese- and sausage-stuffed jalapeños), the Crispy Market Veg of the day with mole and sesame (after all, the restaurant is at a farmers market), and then the tough choice of Bacon-Wrapped Jalapeño Quail or Shrimp and Grits Diablo. There’s also an intriguing Sunday brunch buffet from 11 a.m. to 6 p.m. With the level of energy and creativity at work, Wild Oats is sure to offer many other interesting food adventures, too.