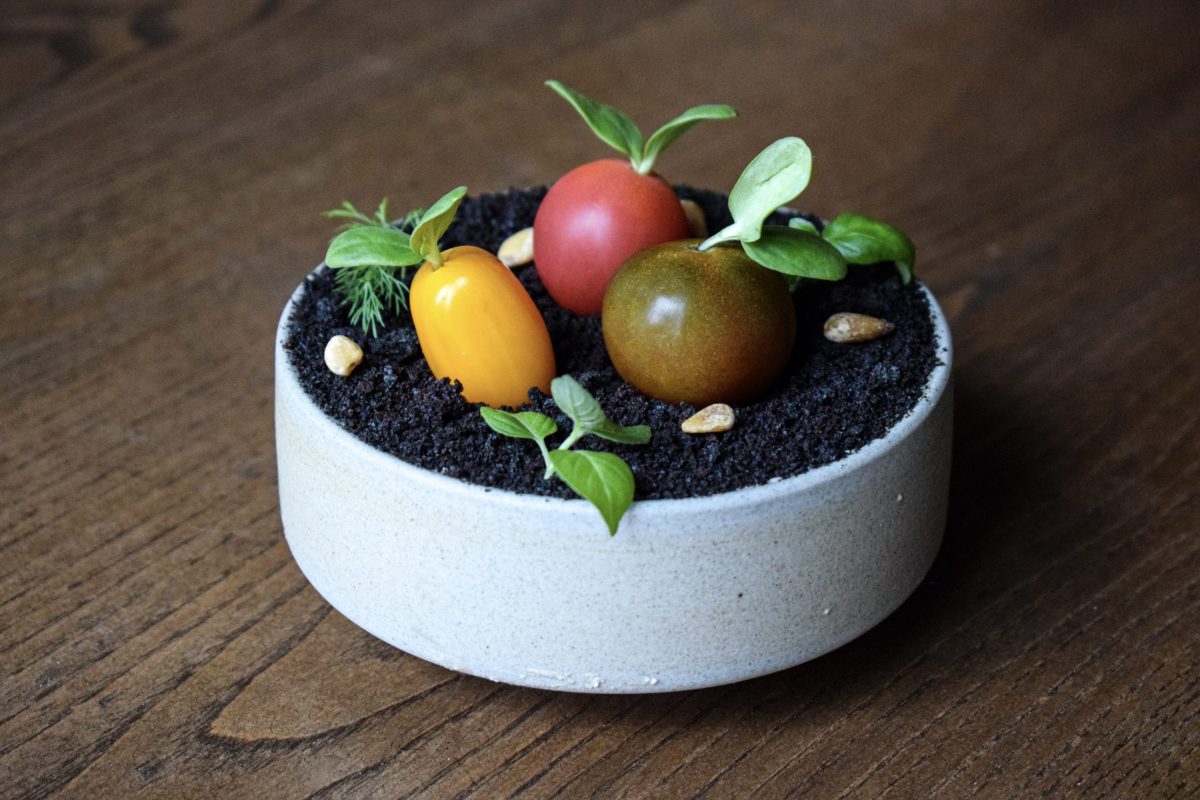 Tomato Garden from the Cold Tastings at Money Cat. Photo by Sabrina Miskelly.

We started the evening circling the block a couple of times before finding the entrance to Money Cat, the new restaurant at 2925 Richmond. There was no discernible sign or entrance that we could see, just a small valet stand barely visible from the street. As we walked up to the restaurant, we then noticed the unlit sign with the restaurant’s name. By the end of the night, we were joking with executive chef and owner Sherman Yeung about his sign with no lights (Yeung is dealing with the contractors to get it working) and he smiled and shook his head, seemingly acknowledging the challenges that come with owning your own restaurant.

Money Cat is an adventurous passion project. Dingayan said that night, “We can’t sit still,” — and they certainly haven’t. In preparation for opening Money Cat, both Yeung and Dingayan staged at Michelin-starred restaurants; Dingayan at n/naka and n/soto in Los Angeles and Yeung at Birdsong in San Francisco and Smyth in Chicago. Their collective experiences are reflected  in the space, the service and the techniques employed in the dishes.

Located in an office building, some might describe the space as austere and stark, but I found the minimalist design with rich wood, neutral tones, black marble and emerald-green tilework to be quite handsome. While modern, there is a comfort and warmth that greets you (the wall of maneki-nekos, Japanese for “beckoning cats”, welcome you with a wave) and stays with you throughout the meal. The dining area looks onto a semi-open kitchen and a high-top sushi bar. Yeung paid close attention to the details, including the music, which is kept at a volume that adds to the ambiance but still allows you to speak to your dining companion and server. This allows the food to be the main attraction, which is a refreshing change of pace.

The menu consists of eight different sections: vegetables, tempura, robata, hot tastings, cold tastings, makimono, nigiri/sashimi and dessert. Houston Food Finder was invited to attend Money Cat’s soft opening, and we were able to try an array of dishes from each section. The first, Tomato Garden ($11), set the whimsical tone for the evening. It resembled a garden of baby heirloom tomatoes and herbs growing from dark squid ink “soil” with black garlic cheese foam underneath. We were encouraged to dig in and scoop up a little of everything. Not knowing what to expect is half the fun of this dish. While the texture was similar to a mousse, the flavors were savory. This is an ongoing theme in the dishes that Dingayan has curated. He explained that his vision was to bring “the magic of pastry to savory dishes.” The tomato garden was his version of a savory trifle.

From the cold tastings section, the Hotate Coco ($20), a crudo of hokkaido scallops on a bed of coconut milk with cara cara orange supremes, gochugaru salt, chili oil and finished with a green apple foam, was one of my favorites. The dish had each of the flavor elements: rich umami from the scallops, sweetness from the coconut milk, slight bitterness from the oranges, just the right amount of salt from the gochugaru and a hint of sourness from the foam. Making the dish more impressive was Dingayan’s inability to taste it himself, since he is allergic to both shellfish and green apple.

One of the most innovative dishes from the cold tastings was the Canh Chua ($26), a riff on the southern Vietnamese tamarind-based sweet and sour soup. Here chu toro (medium fatty tuna) is crusted in nori goma furikake rice seasoning, set atop honey kizame aioli, topped with pineapple tamarind granita, and an Asian herb trinity. The idea is that the ingredients together express the essence and flavors of the homey soup. Making it cold instead of hot was a clever way of making something new out of the traditional.

The Chutoro Toast ($26) from the hot tastings should not to be missed. Slices of cured chutoro are served open faced on a slice of squid ink milk bread, dotted with burnt-honey cream cheese and topped with crunchy shallot bits and fresh dill — an elevated Japanese version of bagel and lox.

Money Cat’s version of sushi-restaurant-staple chawanmushi (steamed egg custard), Hotate Chawanmushi ($14), has scallops and cultured butter and is served with corn and chive taiyaki. Egg custard is typically very delicate, but this one was heartier, especially when using the taiyaki to scoop into it like a dip.

The last thing we tried from the hot tastings selections was the Chicken Katsu Sando ($16), a panko-crusted, deep-fried chicken sandwich on milk bread, with coleslaw, Japanese tartar sauce and tamari caramel. This isn’t one of the dainty sandos you may be used to seeing; this is a Texas-sized chicken sandwich. The server told us Yeung was focused on cooking the chicken properly, and it was. The chicken was tender and juicy, and the panko crust held up with each bite. It was just slightly under-seasoned, and I wanted more of the rich, salty-sweet tamari caramel.

Make sure to get dessert. This is where Dingayan really shines and showcases his inventiveness. Nashi Kakigori ($16) combined nashi pear milk snow with sudachi compressed asian pear, koji cream sea foam, milk mochi, sudachi pear sorbet, corn ice cream and honeycomb candy, topped with candied corn silk. While the laundry list of ingredients sounds complicated, the idea of it is born from simple, traditional Asian desserts such as Filipino halo-halo, Vietnamese che and Korean bingsu. This was a dish I truly enjoyed because it was so familiar yet so complex in execution.

The Autumn Bonsai ($26) is a work of art. A bonsai tree crafted from dark chocolate is surrounded by different bites: maple-grilled pineapple mousse, pumpkin spice blondie, kabocha cheesecake, orange and a five spice tuile. Every bite was different but worked together to evoke the flavors of fall. The idea is that the flavors and colors of the dish will change with the seasons.

The beverage program is overseen by Chau and Castro, and the thoughtfully crafted cocktail list will also change to align with the seasonal food menu. The current cocktails include Orenji Sunset ($14), which was my favorite of the night. It is a gin-based drink with carrot juice, ginger, kabosu, satsuma and celery bitters. The classic carrot and ginger combination gets fresh brightness from the Japanese citrus and pairs perfectly with the herbal gin.

The best part of the evening was talking to Yeung and Dingayan. Hearing the stories and ideas behind the dishes added a different layer to the experience. They took time to talk to each table, taking advantage of the soft opening period to ask questions and listen to diners. I hope this is something they continue to do. While not every dish was perfect, each captured the spark of what they were attempting creatively. With time, they should only get better. This will be an exciting restaurant to visit over and over again to see where the team’s imagination leads them next.

Money Cat is celebrating its grand opening on Saturday, January 7. It will have lion dancers, sake tastings and other special features to commemorate the day. We recommended making reservations.