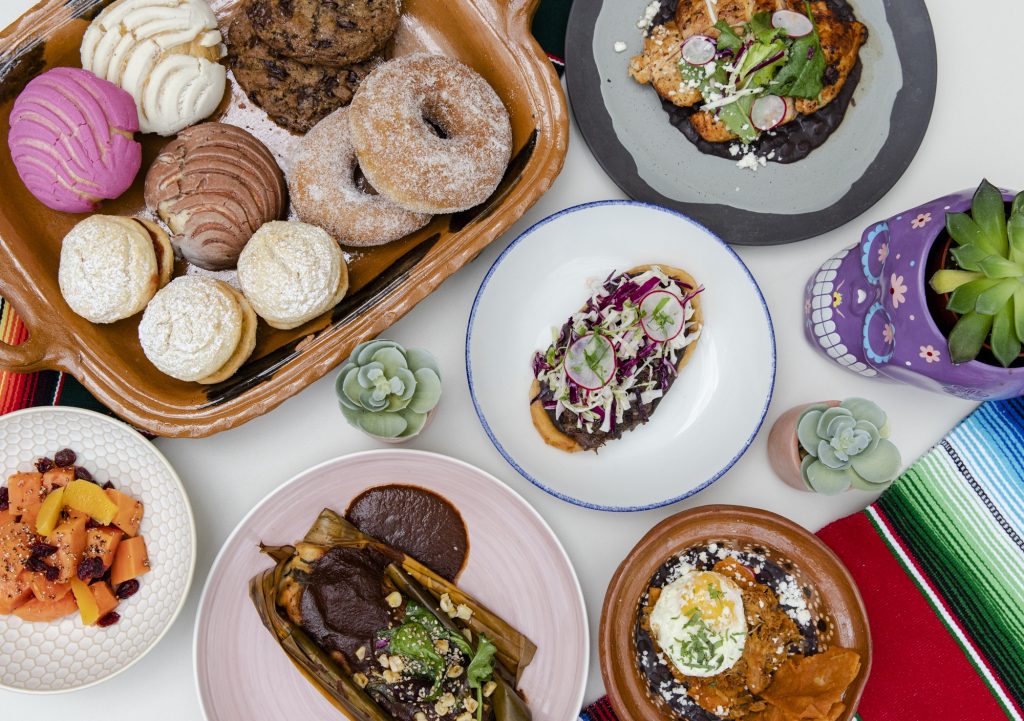 A central Mexican spread at Tlahuac. Photo courtesy of Tlahuac and NextSeed.

As a young boy, chef Nicolas Vera — who would later hone his skills at notable Houston restaurants such as Underbelly, Southern Goods and Xochi — would wander the mercados of Veracruz with his mom while sipping tepache, a refreshing beverage made by fermenting pineapple rinds. Those memories now inspire the Tepache Chicken Plate at new pop-up Tlahuac (pronounced “kla-wok”) in The Hub food court at Three Greenway Plaza. The plate includes chicken breasts marinated in housemade tepache vinegar and guajillo chilies, pan-seared and served with clay-pot black beans. Tlahuac is a long-term pop-up operated by Vera and chef Stephanie Velasquez, who began her career as a dishwasher before overseeing pastry at Weights & Measure and Xochi.

After two years at Hugo Ortega and Tracy Vaught’s acclaimed Oaxacan restaurant Xochi, Velasquez and Vera decided to explore central Mexican cuisine through a series of their own pop-ups. Those soon earned the attention of the crowdfunding investment platform NextSeed. The company offered the duo an opportunity to do business for a while in its new incubator space in Greenway Plaza.

The menu at Tlahuac is redolent with Vera’s childhood memories of growing up in Veracruz, the food of his mother and grandmother, and trips to México City. Velasquez starts work around 4 or 5 a.m., preparing a full array of pan dulce, three baking trays at a time, in a small convection oven to ensure the pastries are ready by the 8 a.m. opening time. Another pastry highlight, which is available from 8 a.m. until sold out, is a sweet, bitter, salty chocolate chip cookie. It’s made with organic cacao that Vera’s mother sources from a friend in Tabasco, México and a candidate for one of the best cookies in Houston.

The cacao is also blended with three varieties of smoked chilies and aged for ten months to create an earthy, spicy perfectly balanced mole madre that Vera uses in the dressing for his seasonal market salad and in a Thursday tamale special.

Vera’s other savory creations include huarache, an oval-shaped masa cake popular in México City that is layered with beans, meat and cheese. Each day at Tlahuac, they hand-form the masa into the sandal shape that lend the cakes their name. The masa cakes are then parcooked, just as it’s done in México, and then fried to order. Vera offers two variations: a vegetarian option with refried black beans, roasted mushrooms and squash and huarache de barbacoa, which is mounded with refried black beans and a succulent, zesty barbacoa that he makes daily by alternating layers of beef cheek seasoned with chile morita (a pepper popular in Veracruz and Puebla) with layers of avocado leaf. Those layers are then wrapped in banana leaf before roasting them in the oven for several hours.

Tlahuac’s lunch menu is rounded out with pambazo de puerco, a variation of a torta popular in the central Mexican states of Puebla, México and Veracruz filled with tender pulled pork and cabbage slaw between the halves of a housemade telera bun. For extra spice, the top half of the bun is dipped in red chile sauce.

Long before food halls became trendy, the food court at Greenway Plaza evolved from bland mall fare and furnishings to a sleek, modern dining destination. The transformation started when David Buehrer and Ecky Prabanto, the coffee entrepreneurs behind Blacksmith and Morningstar, opened their first business, Greenway Coffee and Tea. Their enthusiasm and acumen attracted like-minded friends and colleagues interested in transforming Houston’s dining landscape and willing to first take the smaller steps of transforming the basement of an office building.

Greenway Coffee would eventually be joined by The Rice Box, the Blade Runner-inspired enterprise that grew from a food truck preparing General Tso’s chicken into a three-restaurant chain; burger-chan, serving one of the best burgers in town; and Feges BBQ, one of the best Houston restaurants that opened in 2018.

Tlahuac is another destination-worthy addition to Greenway Plaza’s dinning hub. But go soon, before this praiseworthy pop-up ends, and go early. Vera and Velasquez have been selling out every day and working until 2 a.m. to meet the growing demand for their explorations of interior Mexican cuisine.

Keep an eye on this culinary duo’s dedication, enthusiasm, knowledge, and culinary skills. They are cooking some of the most interesting food in Houston.

Disclosure: Tlahuac and NextSeed provided a few samples to try alongside the dishes we purchased.