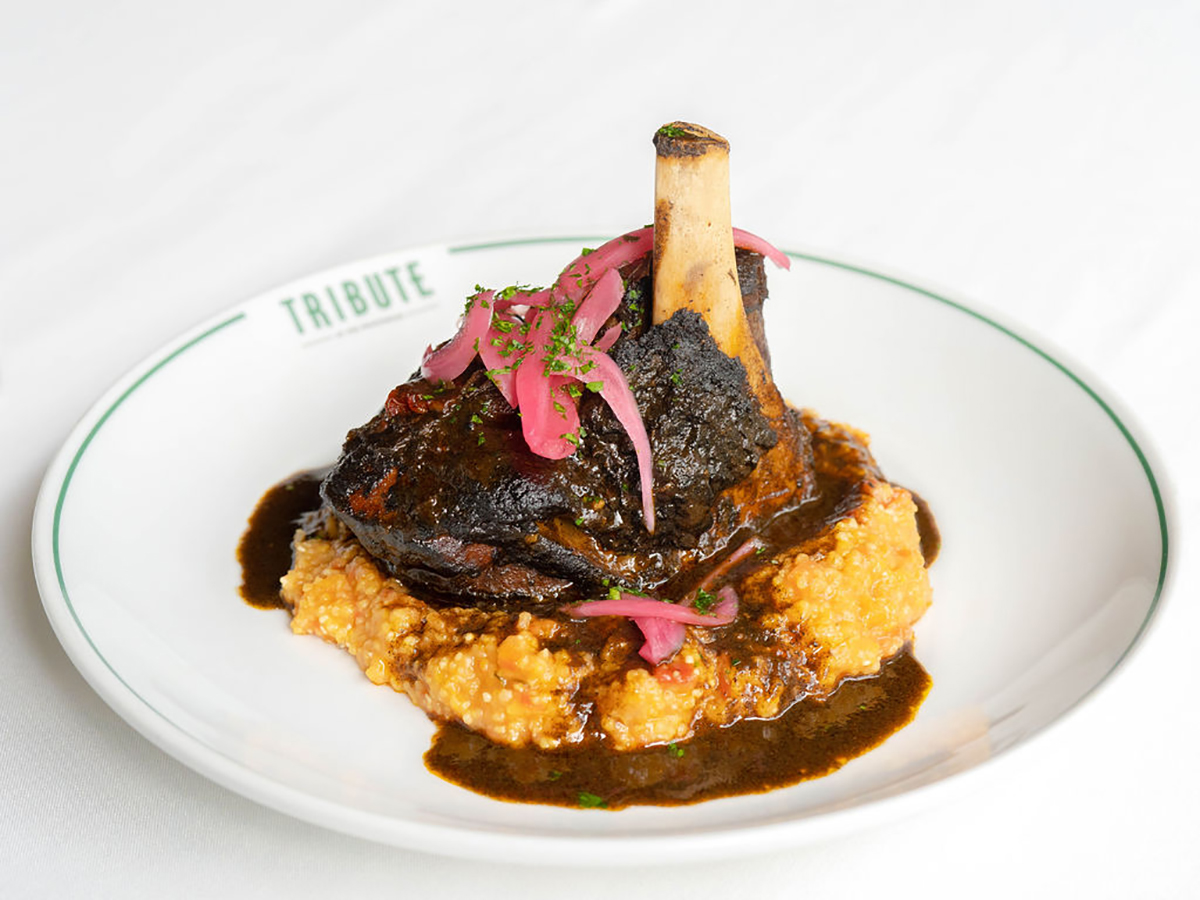 A hefty braised lamb shank covered in recado negro and pickled onion sits atop a wealth of stoneground grits at TRIBUTE at The Houstonian. Photo by Stephania Campos.

Located on 27 acres of lush greenery just off of 111 North Post Oak, The Houstonian — which includes not only a hotel, but also a fitness club, spa, florist, restaurant and pastry shop — has a hidden mystique. It feels special to head up the long driveway, past the magnificent, over-300-year-old live oak, pull in front of the hotel and be greeted by the welcoming doormen. However, you don’t have to be a hotel guest to dine at in-house restaurant, TRIBUTE, or enjoy the lively bar and front patio. For those who need a respite, a nice place to take a client or date or simply a first-class meal, TRIBUTE is a memorable choice. (For really special occasions, there’s also a private wine room.)

My corner table at TRIBUTE had a clear view of the patio in front of The Bar. (Yes, it’s named “The Bar.”) Out front, a respected elder statesman (who shall remain nameless), sat enjoying a martini at sunset. It was tempting to rush out and ask for his autograph, but I refrained. The man was simply trying to enjoy his drink in peace.

I also didn’t want to  disrupt the gracious setting. The Houstonian, and by extension, TRIBUTE, exudes pure class. It’s evident in the impeccably manicured landscaping, the spectacular fresh floral arrangement in the lobby and the attentive-yet-non-intrusive staff. It’s no wonder that The Houstonian has drawn the famous and not-so-famous through its doors for hotel stays, festive gatherings, happy hour in the bar or a meal at TRIBUTE.

TRIBUTE serves what executive chef Neal Cox has coined as Tex-Lex cuisine: food that incorporates the influences and ingredients of Texas and its neighbors Louisiana and Mexico. Every chef on the team brings his heritage to  the menu. Chef de cuisine Jeff Boudreaux is from Louisiana and sous chef Juan Tuch is from Guatemala. Also tending the ranges is  chef Roland Soza, formerly of Bistro Alex in Hotel Sorella at CityCentre, a rare offshoot of Brennan’s of Houston that closed way back in 2014.

Normally, Soza is the chef of The Manor House, the historic venue to the left of the hotel entrance that was designed by architect John Staub and was home to George and Barbara Bush while he served as C.I.A. director and Vice President. Typically, The Manor House serves lunch, but is currently only available for private events. On the night of our visit, Soza was helming the TRIBUTE kitchen. Flanked by servers Ricardo Fernandez and Miguel Rizo, Soza enjoyed explaining to diners the nuances and thoughtful preparation that went into each dish.

The anchor of TRIBUTE’s menu is the food history of Texas, Louisiana and Mexico, as well as Houston. Cox, especially, is intensely interested in the history of specific dishes, and the second page of the menu includes the stories of Smoked Crab Claws (an homage to chef Michael Cordúa, who both Cox and general manager Steve Fronterhouse worked for), Doña Licha’s Huevos Rancheros (a family tradition of sous chef Tuch — and my go-to breakfast at TRIBUTE), King’s Inn Salad (inspired by Cox’s fond memories of family dinners at the King’s Inn, which opened in Riviera, Texas in 1945) and chef Boudreaux’s po’boy, which showcases his Acadian heritage. The bottom of that page highlights TRIBUTE’s purveyors of local ingredients, such as Houston Dairymaids (for cheese, of course), Goode Co., which supplies its famous jalapeño cheese bread and Bee2Bee Honey.

There are cornerstone dishes on TRIBUTE’s menu, but on this pleasant September evening, I’d been invited to try the new autumn dishes, a week before Houston enjoyed its first cool front of the fall. Dinner started with the visually striking white Shrimp Cake atop of red, housemade salsa. The shrimp cake rests upon housemade salsa and is inspired by a traditional Mexican patty made of dried shrimp that’s often served around Lent and Christmas. This version, though, is made with the fresh kind. It’s topped with an escabeche of red onions and julienned carrots. It also incorporates the tart-tangy hibiscus (known as jamaica in Mexico) which is often used for teas and agua frescas. The appetizer is $19 and big enough for two if there are entrées on the way; adding two sides would make it a meal. Two good candidates are the fall-appropriate Brussels sprouts glazed with Steen’s Cane Syrup or the seasonal mac and cheese, which gets a dose of vibrant green from the poblano included in the sauce.

For one of our entrées, we tried the Gulf Frutti de Mer (Italian for “fruits of the sea,” or shellfish) which marries light seafood with toasty fall flavors. It is a tour de force of calamari, shrimp, redfish and mussels in a smoked snapper broth that incorporates toasted orzo, which adds a scent and taste reminiscent of roasted pumpkin seeds (a chef trick you can try at home).

The Texas Striped Bass Almondine arrived with perfectly seared, crispy skin and a scent that evokes coziness and warmth: brown butter. It’s the first thing that will be noticed by the lucky diner and everyone along the dish’s flight path as it floats through the dining room. Toasted almonds reinforce the deep undertones of the brown butter, while Gulf crab interjects its natural sweetness. This dish gave me my single quibble of the meal. Some people like haricot verts (French green beans) crisp and snappy. For a dish like this, however, I’d prefer them to yield a bit more to the fork. I’d still order this again and simply convey my preference to the server.

While all of the dishes were beautiful and exemplified outstanding execution, the lush Braised Lamb Shank Recado Negro atop a bed of stone-ground grits with sundried tomatoes and pickled onions was the show-stopper. My dining companion deftly selected a Pinot Noir from Raeburn Winery in Russian River Valley, which offered both complementary berry notes and enough acidity to cut the lamb’s silky fat. Recado negro, a condiment of dried chiles such as ancho and arbol, and warming baking spices, is often used to season poultry, but Soza’s version pairs beautifully with the hearty lamb. The $48 price tag may seem hefty, but frankly, so is the dish. It could comfortably be split by two, especially if preceded by an appetizer.

Those who prefer poultry but still want the gentle heat of dried, toasted peppers (or who perhaps want an entrée at a lower price point) will enjoy the $28 Post Oak Grilled Chicken. After brining for a day-and-a-half, the chicken is rubbed with a spice blend and accented with a sauce that includes ground ancho, cascabel and guajillo. The chicken is served atop cooling diced avocado and silky tomatillo salsa.

The Houstonian is a city treasure. Dining at TRIBUTE, enjoying a cocktail at The Bar and an after-dinner walk on the meandering trails are not experiences that are exclusively for hotel guests or members. Take the turn off North Post Oak, cruise down the long, winding road past the huge oak with its welcoming branches, and enjoy the hospitality that this sprawling haven has offered residents and travelers alike since 1980.

TRIBUTE at The Houstonian serves breakfast, lunch and dinner Sunday through Thursday. It is dinner-only on Fridays and Saturdays. The hours are from 6:30 a.m. to 3 p.m. and 5 to 10 p.m. Monday through Thursday, 5 to 10 p.m. on Friday and Saturday and 6:30 a.m. to 3 p.m. and 5 to 9 p.m. on Sunday. Self-parking in the garage is free. Guests of the restaurant or The Bar receive validated valet parking of up to two hours. Visit the TRIBUTE at The Houstonian webpage for reservations and additional information.

Disclosure: The Houstonian is a regular sponsor of our work — and you should be, too! Become a supporting reader by visiting our Patreon page. Business owners: request a free Sponsor Guide.