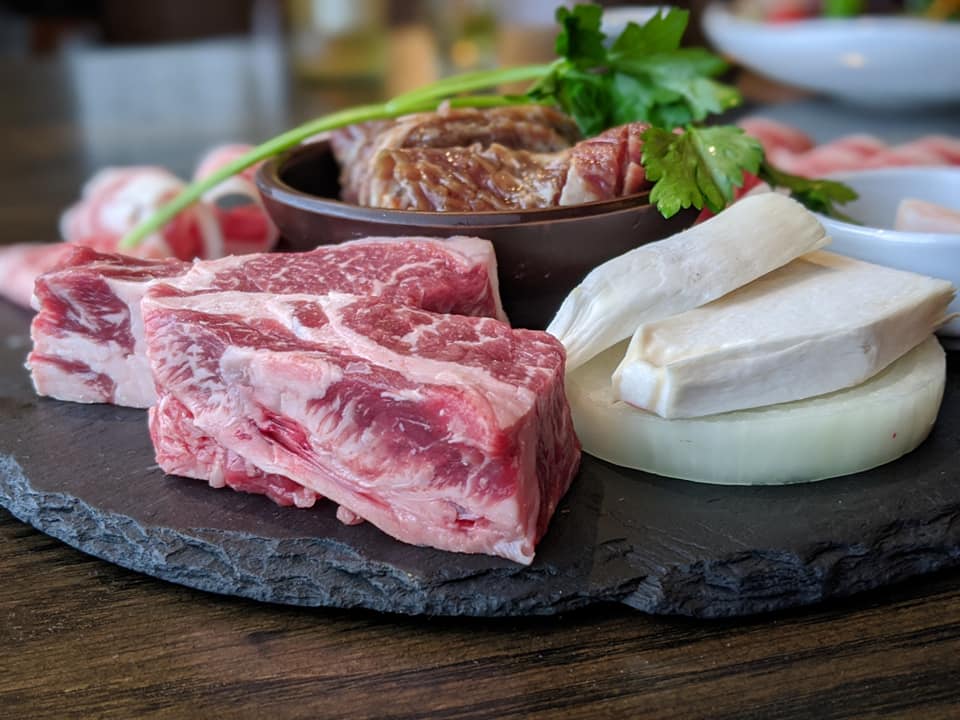 With its collection of culturally significant artifacts and a selection of quality ingredients, BORI at 1453 Witte is an elegant yet casual Korean restaurant tucked into a quiet section of Spring Branch. Conveniently located just a few blocks from I-10 West and the bustling Long Point/Gessner intersection, its placement on a quiet street across from Haden Park gives it a sanctum-like feel that continues past the front door.

As you walk into the peaceful space, you’ll spot an art gallery on your left. One side holds the new: modern, colorful paintings by Chong-Ok Lee Matthews, an artist who helped establish the Korean Art Gallery at the Museum of Fine Arts in Houston. The other represents the old: meticulous works of pottery and paintings from North Korea, rarely seen in the United States, given to owner Kevin Koo’s parents in recognition of his father helping doctors from Memorial Hermann go to that diplomatically isolated country to share their medical knowledge.

Head straight back and you’ll arrive in the Peace Garden, which houses artifacts both joyful and solemn. Most striking is the golden statue of a Korean woman sitting poised with an expression of dignity, yet resigned to her fate. She is a memorial to the “comfort women” — young women captured by the Japanese army between 1932 and 1945 and forced into sex slavery. There is an empty chair beside her, perhaps representing a missing family member, spouse or friend she never saw again. Behind her you will find dozens of kimchi pots, an all-important vessel in Korean cuisine and culture.

These factors help make BORI both a cultural touchstone and a restaurant worth visiting. Chef Steve Won Heo’s approach to Korean barbecue will impress diners who place importance on quality ingredients, and the dining experience is comfortable, even for those unfamiliar with the fare. We were invited in to give it a try for ourselves.

While many of the standard meats, such as bulgogi and boneless short rib, are available (for $24 and $36 for half-pounds, respectively), more interesting are the family-style combinations. The Butcher’s Feast is $112 and comes with four meats. Beef belly is included and then you choose the other three. Meat number two can be either boneless short rib, New York strip, or rib eye. The third meat is either seasoned or marinated short rib (a slight $5 upcharge for the latter) and the fourth can be either pork belly, spicy pork belly or marinated pork rib.

To go alongside the buttery beef belly, we selected New York strip, marinated short rib and hefty hunks of spicy pork belly. In addition, a dozen dishes of both traditional and more modern banchan are severed with the meat. They included a bonus soufflé-like steamed egg dish, decadent “corn cheese” (corn kernels baked in cheese sauce) or a choice of mini soybean or kimchi stews.

If that sounds like a lot of food, it is. The feast fed our group of three and there were leftovers, so it’s a good bet that four would be satisfied, too. That means that, even with the $5 extra for the marinated short rib, the cost for four only comes to $29.25 per person, plus drinks, tax and gratuity.

The Butcher’s Feast is just one of several meat combinations. There’s also the Bori Beef Cuts, which is essentially everything we ordered minus the spicy pork belly, ($93 for the large or $69 for a small, which should feed two to three people); the Selected Pork Cuts with pork belly, pork jowl and either spicy pork belly or marinated pork rib ($58 for a small or $78 for a large); and the Belly Belly, featuring the belly cut in beef, pork and spicy pork ($57 for a small or $76 for a large). Individual bowls of rice don’t automatically come with the meals, but these can be added for a buck — and it is a convenient, sauce-soaking side for the meat and banchan.

Want to get fancier? Bori also offers A5 Japanese Wagyu at market price, as well as dry-aged ribeye and New York loin for $45 each.

As is traditional, meats arrive raw and are cooked on a grill inserted in the center of the table. Each table is also outfitted with round vent hoods mounted low enough that the cooking process is virtually smokeless. Interestingly, our server cooked for us rather than leaving us to fend for ourselves. In theory, you can cook for yourself if you prefer that.

During the generous and frequent happy hours, which run Monday through Friday from 11 a.m. to 6 p.m., Saturday from noon until 6 p.m., Sunday from 1 to 6 p.m. — as well as reverse happy hour from 8:30 p.m. to close every night — prices on many of the offerings drop substantially. For example, the aforementioned Bucher’s Feast dips from $112 to $95. Appetizers, such as the crunchy and generously sized Seafood Pancake, drops from $13 for a large to $11.

Speaking of happy hour: BORI has a good selection of soju. In addition to the Bekseju Rice Wine and Chamisul pictured above, there are flavored sojus — grapefruit, apple, strawberry, just to name a few. There is also beer, including the Korean-made Hite, Kirin Ichiban, Asahi Super Dry and local offerings, such as Karbach Hopadillo and Saint Arnold Art Car IPA. During happy hour, wine is $2 off by the glass and 15-percent off by the bottle.

Those who approach Korean barbecue as a cheap stuff-fest might be put off by Bori’s bells and whistles, but it is a comfortable experience for those who want better cuts of meat in a thoughtful atmosphere.