KFC’s Fried Chicken & Donut Sandwich is Out Now. Its Shoes Are Coming Soon 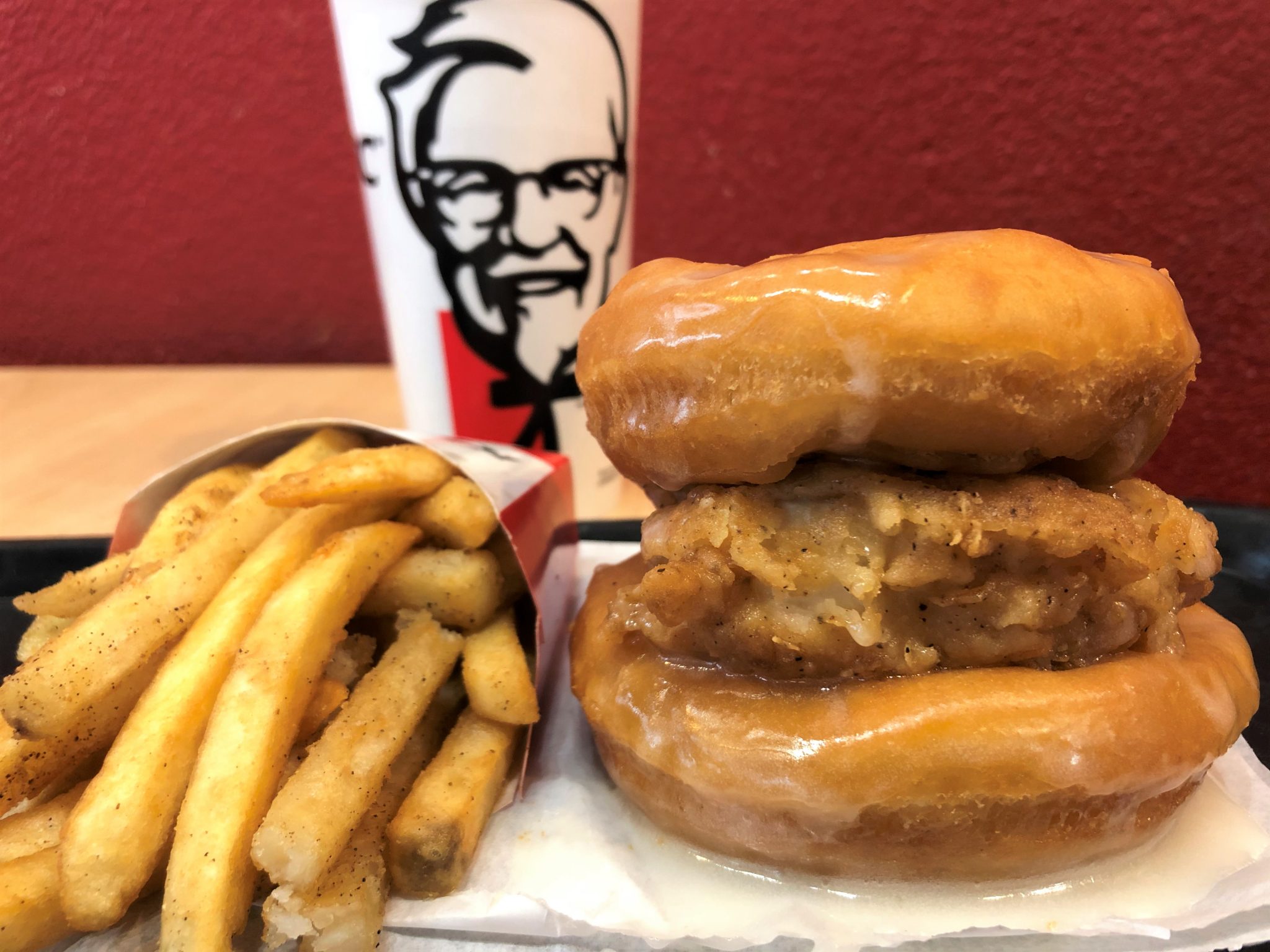 Just when the fried chicken sandwich craze appeared to be slowing down, Kentucky Fried Chicken announced the launch of its Chicken & Donut Sandwich. Available now through March 16 (or while supplies last), it features a hand-breaded, crispy chicken fillet between two glazed donuts. Diners can choose the sandwich alone for $4.99 or include fries and a drink for $6.99.

Fans of this sweet and savory combo can also opt for a finger-lickin’ chicken and donut basket. The combo comes with a choice of white- or dark-meat chicken on the bone or tenders paired with one donut for $4.99. Or, indulge in the $7.49 big-basket meal for additional chicken and two donuts. Actually, donuts can be added to any KFC meal for an additional cost.

“Chicken & Donuts is the newest fried chicken trend we’re bringing to all of America,” said Andrea Zahumensky, chief marketing officer of KFC U.S. via a press release. “But not just any donut would do. Only a donut that’s glazed-to-order and served piping hot every single time can stand next to our hand-breaded fried chicken. It’s a finger lickin’ good dish filled with glaze and glory.”

For Houstonians, the decadent union of chicken and donuts is nothing new. Sam’s Fried Chicken and Donuts (formerly Lee’s Fried Chicken & Donuts) at 601 Heights has been serving up this tasty marriage of flavors for years. Open seven days a week, Sam’s Double Donut Sandwich is made with two fried chicken tenders topped with bacon marmalade nestled inside of two whole donuts. It costs $7.50.

KFC’s donut sandwich is gooey goodness that’s best eaten as soon as possible. The glaze pairs well with the Colonel’s secret mix of herbs and spices in the crispy chicken filet. The donut itself, albeit messy, manages to hold up without falling apart too much. One bit of advice: have lots of napkins on hand, or be prepared to lick your fingers.

For superfans of KFC, you can now eat your chicken and wear it too. KFC is partnering with Crocs on a special classic clog featuring a realistic chicken pattern along with the iconic red-striped bucket design. The clog is adorned with two removable, chicken-scented charms shaped like drumsticks. “Combining the unmistakable look of our world-famous fried chicken and signature KFC bucket, with the unparalleled comfort and style of Crocs, these shoes are what fried chicken footwear dreams are made of,” said Zahumensky. With this shoe brand partnership, KFC is stepping up the competition (ha, ha) among fast food chains — including rival Popeyes — that offer themed clothing.

The Kentucky Fried Chicken® X Crocs™ Classic Clog is available this spring and retails for $59.99. Fans can sign up on Crocs.com to be among the first to receive a reminder when the limited-edition footwear is available for sale. Fans whose “bucket list” (ooof) includes sporting chicken footwear are encouraged to share their clucky #KFCCrocs on social media by tagging @Crocs and @KFC.

Houston Food Finder4 hours ago
True, this weekend’s Bayou City Art Festival is a great place to pick up some new pieces, but it’s also a fabulous time to enjoy some of Houston’s best restaurants and food trucks all in one place. Sustain your art crawl with stops at the craft beer garden and food truck park, and make time to watch chefs perform demos of signature dishes. Read more from Minh Truong.

Houston Food Finder6 hours ago
ICYMI: You may already know The Toasted Coconut in Montrose, but do you know it houses a hidden, separate restaurant? Quiote is tucked behind a discrete wall and offers unique Mexican dishes and cocktails. Learn more from Cindy Wang.

Houston Food Finder is at Luce Coffee Roasters.8 hours ago
Luce Coffee Roasters
🥤Grabbing a coffee in Houston is a lot of fun thanks to the wide variety of experiences available. Choose from casual hangouts for studying, grab a brew on the run or sign up for specialty coffee classes to improve your own prep game. Most offer thoughtful eats, too, along with beans, equipment and more. Ryan Kasey Baker shares the best spots in town.