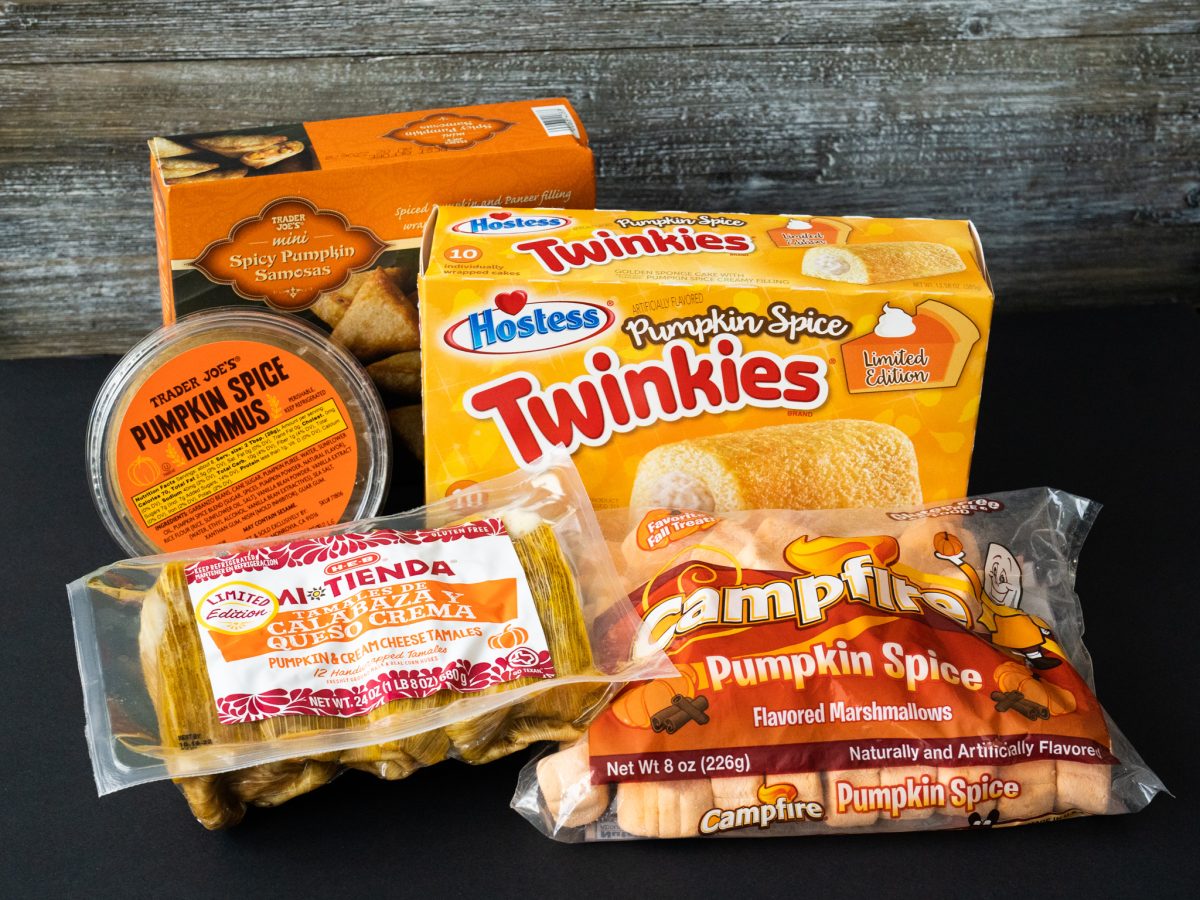 All the pumpkin spice goods. Photo by Cindy Wang.

Pumpkin-spice madness is in full swing. Suddenly, everything has unnecessary sprinkles and splashes of cinnamon, nutmeg and clove. I love pumpkin pie, but I do not love the pumpkin spice-flavored-everything craze.  Yet, I stupidly volunteered to try some ridiculous pumpkin-spice products, because I like my editors that much.

Editor’s note: Thank you for your sacrifice for the common good.

Twinkies, the fabled after-school snack that can supposedly survive an apocalypse. (Spoiler alert: they can’t.) Pumpkin-spice Twinkies look just like regular Twinkies, but it’s what’s on the inside that counts, right? The regular cream filling is replaced with a pumpkin-spiced version. Twinkies aren’t my favorite, but I don’t mind them once in a blue moon. Guess this is my lucky day.

You know what? It’s not bad at all. It has the same moist cake exterior, but the filling had a notable spiced flavor that went really well with the classic yellow cake. You win the pumpkin spice game this time, Twinkies. Be proud of yourself.

These are orange and pumpkin-shaped, in case you forgot what you were eating. I tried these in a few different iterations since no one eats marshmallows by themselves unless you’re playing a game of chubby bunny. (Who thought stuffing your mouth full of marshmallows was supposed to be a good ice-breaker game?) Anyway, here’s the assessment:

Marshmallow alone: I had to try the marshmallow alone to have a control group. It tasted like… a regular marshmallow. There was a very vague hint of cinnamon at the end if you’re really looking for it, similar to a bland, non-spicy Red Hot. I had to check the packaging to make sure these were actually sold as pumpkin spice marshmallows and not just pumpkin-shaped ones. As a result, I didn’t hate them, but it’s kind of cheating since they barely taste different from the non-pumpkin spice variety.

In hot cocoa: I made myself a mug of hot cocoa (using milk, of course), threw in two marshmallows, and got the same results as eating the marshmallow alone. No noticeable differences. This had good potential to add spice to a cup of hot cocoa, but no such luck. Just plain, orange-colored marshmallows floating in my mug. If I wanted spice in my hot cocoa, I’d be better off making some from Abuelita tablets or ordering the ones locally made by Hugo’s.

In s’mores: These were great as s’mores! You know why? Yep, because they taste the same as regular marshmallows. Except they’re orange and, after squishing, looked like a weird blob of uni between graham crackers. The upside to this experiment is that I tried the oven method of making s’mores, and was delighted to find that I could make great ones in my kitchen without burning my house down with a campfire.

Overall: These are fine, but it’s cheating if they don’t taste like pumpkin spice to begin with. Go forth and enjoy your marshmallows with orange coloring.

I hate that this exists. Someone at Trader Joe’s decided this was a good idea and I made the very stupid decision to try it. I didn’t have any pita bread at home, and the only pita chips I had were garlic-flavored, so I tasted these with water crackers because who cares anymore.

It was terrible. I love pumpkin pie. I love hummus. I do not love them together. The result is cold and slightly gritty pumpkin-flavored glop, confusingly sweet with pumpkin spice while still leaving that nutty chickpea aftertaste. The packaging suggests eating it with apple slices, but I feel like this is how you teach small children to hate apples. This is definitely a situation where someone asked themselves if they could, but did not consider if they should. They should not have done this. They really, REALLY should not have done this.

I need to call someone’s abuela to borrow a chancla, because someone at H-E-B headquarters needs to answer for this. These “is it dessert?” pumpkin and cream cheese tamales were absolutely baffling, and they’re precisely the kind of thing that nobody wanted nor needed.

The package directions suggested steaming them, along with directions for microwaving if you want to expedite your misery. I did both, and I can only tell you that it didn’t matter how they were heated up, because nothing was going to prepare me for how horrible these were.

Structurally, they were fine. That’s about the only good thing I can say about these tamales. They smelled awful in a way that I can’t describe. They tasted like someone mixed pumpkin purée with the masa, and then dumped in a jar of pumpkin-spice syrup. They were sickenly sweet and spiced, so I guess they were pumpkin spice-flavored as advertised. Then they inexplicably threw cream cheese into the mix, giving it a bizarre and terrible sour undertone that made a bad tamal even worse. Was this supposed to be a take on pumpkin cheesecake? Was this someone’s rebellious rage against the overdone pumpkin-spice craze manifested? If so, you’ve succeeded. These were awful, thank you.

So these aren’t exactly pumpkin-spice flavored, but the packaging did say pumpkin and spices, so I thought I’d give them a try anyway. I popped them in the oven and hoped for the best.

I really enjoyed these! They weren’t necessarily pumpkin spice-flavored samosas, but they were definitely pumpkin and they were definitely spiced. The wrappers enclosed a spicy and slightly sweet filling thanks to the addition of sweet potato. Think spicy curried pumpkin in a crisp wrapper, with bits of paneer cheese dotted throughout. No complaints here, although this was very loosely landing in the pumpkin spice territory. I wouldn’t go out of my way to buy them again, but I wouldn’t mind eating them if someone had them on a party tray.

Editor’s note: make sure to share this with all your friends so we can ask Cindy to try more pumpkin spice products for another article. 😉