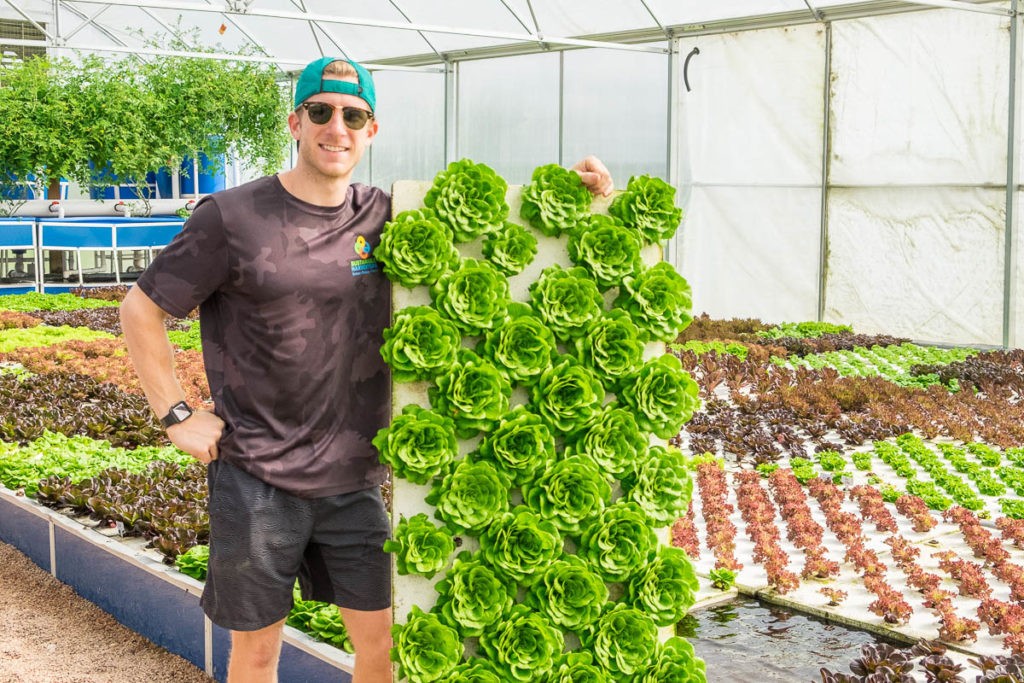 The “How It’s Made” series focuses on high quality ingredients that end up on the plates of Houston restaurants.

At Sustainable Harvesters, delicate, spiky-leaved heads of Red Fire lettuce are carefully loaded into shallow cardboard boxes. These are bound for One Fifth, chef Chris Shepherd’s new restaurant in Montrose. Others may be headed for Weights + Measures, Rico’s Morning Noon Night, Bernadine’s, Harold’s Restaurant & Tap Room, Hunky Dory, Dish Society or La Table. On a different day, other heads of “living lettuce”—with the coconut fiber they grew in from a seed still attached—will be packed in plastic, clamshell-shaped boxes and sent to produce shelves at select Kroger grocery stores.

Sustainable Harvesters is located in Hockley, Texas, about 50 miles northwest of downtown Houston. Matthew Braud and Andrew Alvis founded it after graduating with agricultural business degrees from Louisiana State University in 2012. After returning to their hometown of Houston, they noticed not only the thriving, diverse restaurant scene, but also that restaurants that sourced local produce were citing the same farms over and over again on menus. Seeing the big demand for “green” products, Braud and Alvis started their operation in an old horse stable. Once they established a successful aquaponics system, they invested all their savings and got another $75,000 via a Kickstarter campaign.

Normally, the growing season for lettuce in South Texas is very short and it’s ideally only planted in January, part of February, October and November. Lettuces need cool, but not freezing, weather to thrive. Sustainable Harvesters, though, has temperature-controlled greenhouses. The entire back wall is outfitted with fluted, reinforced cardboard and fans. When the wall is wet, the fans blow the moisture through so the system acts like a giant air conditioner in the summer. In the winter, of course, it’s not in use.

The “sustainable” part of the name alludes to the lettuces being grown with no pesticides or fertilizers whatsoever—or even soil, for that matter. The name “aquaponics”—and the process—is a hybrid of “aquaculture” (raising fish in a controlled environment) and “hydroponics” (growing plants in water).

In hydroponics, nutrients have to be added to the water to feed the plants, but in Sustainable Harvesters aquaponics system, the plants are fed by tilapia grouped in big blue tanks by age and size. Their waste feeds the lettuces, eliminating the need for adding nutrients or chemicals. “We’re cleaning that water and returning it back to the fish tanks,” Braud explained. “We also only use ten percent of the water it would take to grow these outside.”

The fish actually generate more solid waste than the plants can absorb through their roots. Braud says 75-percent is captured and sent to a compost bed. Even that gets used, as it is later bagged up and sold to traditional farmers. Water intended for the plants is filtered through beds of expanded clay pebbles (heated until they pop and become porous) and red wiggler worms. Both help remove ammonia and bacteria before it gets to the plants.

Since starting in an old horse stable, demand has been so high that Sustainable Harvesters has grown to three greenhouses. The tightly controlled conditions enable them to grow about 7,000 heads of lettuce per week. The types include red and green varieties of Oakleaf, Butterhead, and Lolla Rossa, as well as Boston Bibb, Red Fire, Red Romaine and green Summer Crisp.

Sustainable Harvesters doesn’t sell their produce to the general public, but they do offer tours (especially appropriate for field trips and science classes). “We have a lot of walkways up and down these rows so that students of all ages can learn about sustainable agriculture, including students from Texas A&M and gardening clubs,” said Braud. Sustainable Harvesters also sells home-sized aquaponics systems. At about $2,000, these are not cheap, but do include everything an individual needs to get started—even the fish.

At this point, the sky’s the limit on potential sales. Due to years of drought and then sudden massive rainfall, Sustainable Harvesters is now also selling to California. “It’s a small needle in the big giant of California lettuce production,” said Braud. “That’s where 90-percent of the world’s lettuce crop comes from because of the [normally] perfect weather environments.”

That’s not too shabby for a company that started in an old horse stable.