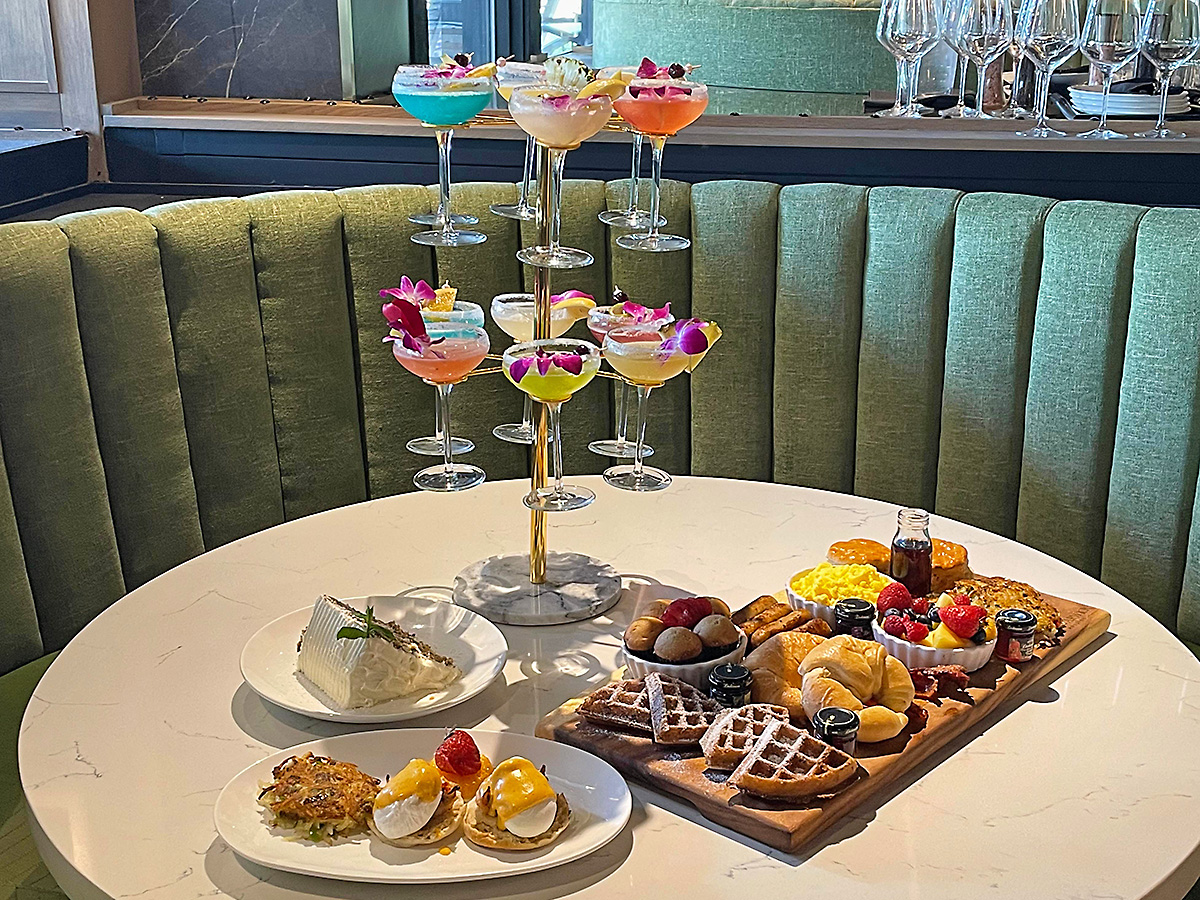 A Sunday brunch spread at The Warwick, along with a Martini Tree of flavored lemon drop cocktails. Photo by Ryan Baker.

In 2019, after 40 years, Houston’s on Westheimer closed without warning. Fast-forward to 2022, and The Warwick now operates in that location at 5888 Westheimer. Since opening, the restaurant has expanded its hours and added brunch, which is from 11 a.m. to 4 p.m.

The Warwick is posh and has an upscale dress code to match. However, instead of being stuffy, it boasts an energized atmosphere. Several days a week, there is a DJ playing upbeat music. During Sunday brunch, which is when Houston Food Finder was invited to visit and try some of the dishes, a sharply dressed man playing the saxophone waltzed around the dining room.

The service was cordial and expedient, and our server displayed the kind of energy that made it feel as though he was as excited to be there as the guests. The staff informed us that they have recently gone through new training, and it showed.

The Warwick offers a few shareable starters, including standards such as spinach and artichoke dip and avocado toast. Initially, the Breakfast Quesadilla looked out of place on the menu. However, the combination of eggs, cheese and chorizo, which is dripping with grease (as it should) is rich and hardy enough to revitalize any (hypothetically) hungover food journalist. The Board Room Breakfast Platter, which is enormous and served on a wooden board, features butter-pecan waffles, candied bacon, sausage, eggs, croissants, muffins, green chili hash and fresh fruit. It is enough for groups of four or five.

Warwick’s selection of brunch entrées is small but creative. Guests can choose from dishes such as Gulf shrimp and grits, Lobster Benedict, egg-white frittata and Tres Leches French Toast. Breakfast purists can order the Americana classic:  two eggs, Texas toast, green chili hash and your choice of bacon or sausage.

Considering the high price tag and the southern-comfort style, both the Warwick Fried Chicken and Waffles ($28) and Smoked Oxtail Hash ($34) feel dainty. That said, the fried chicken is well-seasoned and crispy. It is paired with a show-stealing, pillowy butter-pecan waffle and Maker’s Mark syrup.

The oxtail hash, which comes with two eggs, has potent, earthy savoriness and spiciness that, at first, is warm and soothing, then the intensity builds up and lingers. Overall the dish is delightful, but could use contrasting flavors to brighten the overwhelming spices. Additionally, The Warwick offers three sandwiches including the double-patty Warwick Cheddar Burger, a hot chicken sandwich and a breakfast sandwich.

The establishment does not have a published dessert list, but everyone recommended the carrot cake. The cake is made from scratch by Ms. Betty, the mother of one of the restaurant’s owners. The slices are massive, moist, and not overly sweet. It took a good deal of restraint to not interrupt Ms. Betty’s meal to tell her how impressive her cake is.

Cocktail options are a mixed bag. Similar to the food, the drinks at the Warwick feature personalized touches on recognizable classics. For example, the Espresso Experience, with vodka, espresso, crème brûlée syrup and Licor 43, is a play on the carajillo. (Imagine a Latin Irish coffee with a huge bite of vanilla and cinnamon.) The most successful drink, surprisingly, is the mimosa. Instead of using an overly sweet bubbly, the Warwick uses a drier sparkling wine with a bready flavor reminiscent of Champagne.

Other drinks, such as the Martini Tree, come across as, “doing too much.” While visually impressive, it is a head-scratcher. The trees come with either six or twelve lemon drop martinis, in which the vodka has been replaced with tequila, and in six different flavors. A tequila lemon drop is essentially a margarita — or, a tequila daisy without the club soda, if you’d like to be precise. Additionally, with the added flavors and Casamigos, a super-sweet tequila, as the spirit, these are ultimately too sugary. It’s also mystifying why the cost is $150 for a tree of six cocktails and $300 for 12, which comes to $25 each.

The Warwick is an experience, and the opportunity to be there is clearly part of the cost. While not every plate (or glass) was a hit, the brunch dishes that delivered make this restaurant worth a second visit.