Dining & Drinking Deals For The Fourth Of July 2018 In Houston 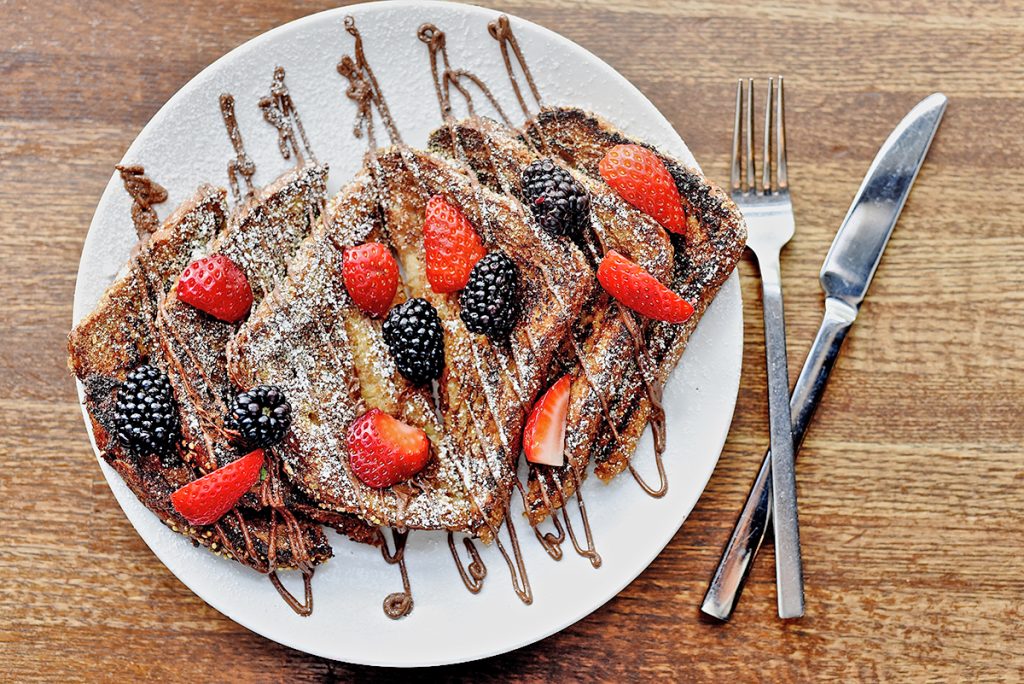 The Nutella French Toast with berries at Dish Society. Photo by Kimberly Park.

Whether it ends up raining this Fourth of July (thunderstorms are currently in the forecast) or being 104 degrees (because you never know), neither condition is going to stop Houstonians celebrating freedom and independence. As always, there are going to be many restaurants and bars hosting parties with dining and imbibing specials. There are even some freebies.

In addition, there are a few restaurants in particular that have a spectacular view of the annual fireworks show that lights up downtown Houston and beyond.

Fourth of July Brunch at Dish Society, various locations: Get a busy holiday started with Nutella French Toast with a patriotic sprinkle of red and blue berries or a plate of brisket, eggs and smoked gouda grits during a special Wednesday brunch service. For drinks, try a “Fromosa” (rosé mimosa) or a Scarlet Red Sangria with Cabernet, Fonseca Bin 27 port, lime juice, simple syrup and cherry. Brunch runs from 7 a.m. to 3 p.m. and then Dish Society is closing for the day to allow its employees to celebrate.

Celebration Platters To-Go at Antone’s Famous Po’ Boys, 4520 San Felipe and 2724 West T.C. Jester: These longstanding Houston restaurants are closed on the Fourth of July. However, Antone’s Famous Po’ Boys is making it very easy to prepare for at-home hosting with its to-go service. Get a small sandwich tray, three sides, a dozen housemade cookies and a gallon of iced tea for $60. The side dish choices are coleslaw, potato salad, pasta salad, fruit salad, tabouli and hummus. The sandwich assortment can be any combination of the Original, Turkey & Swiss, Tuna and The Piggy po’ boys. Call the catering director at (832) 833-9060 to place an order by 3 p.m. on Tuesday, July 3.

“Batter Cluck Tomorrow” at Better Luck Tomorrow, 544 Yale: This popular Heights hangout co-owned by serial bar-opener Bobby Heugel and Theodore Rex’s chef Justin Yu has made a tradition of celebrating the holiday — before the holiday. July 3 is going be “Batter Cluck Tomorrow,” a made-up food day that presents Yu as the colonel that the city never asked for, but the one that it definitely deserves. Buckets of fried chicken — a whole bird’s worth — are being served along with mashed potatoes, coleslaw, and peas and carrots. Keep the image of Yu as the Colonel emblazoned in your memory for all time with the stickers and T-shirts available to buy and take home. Note that the event is in lieu of the normal pasta night, but honestly, who cares? We’re talking about fried chicken here, people. Keep your priorities straight.

Set Food On Fire at Central Market, 3815 Westheimer: Learn the time-honored, dramatic art of flambé the evening before the Fourth. The Central Market cooking staff is teaching students how to (carefully) finish a dish with this technique. It helps burn off excess alcohol in sauces, leaving only the most flavorful elements behind. The practice dishes for the hands-on class include Saganaki (flaming Kefalotyri cheese topped with oregano and capers); Lobster Lisa in brandy cream sauce over noodles; Steak Diane with cognac sauce served with creamy mashed potatoes and fresh horseradish; and Crepes Suzette. As of press time, 11 spots remained. The cost is $70 per person and attendees can register online. (There’s an pie-making class earlier that day that includes apple pie, too, and students get to take home their work. Hurry and you might score one of the last three spots available at press time.)

Free Smoothie at Clean Juice, 12505 Memorial and 1413 South Voss: Clean Juice was founded by husband and wife team Landon and Kat Eckles and claims to be the only “100% USDA-certified organic and California Certified Organic Farmers (CCOF) franchise concept in the world.” All locations, including the two current ones in Houston, are giving each guest a free smoothie with all organic ingredients on the Fourth of July from 8 a.m. to 5 p.m. The choices in flavors are “So Basic” with almond butter, almond milk, banana, maple syrup and strawberries and the Tropical with banana, coconut oil, coconut water, kale and pineapple. In addition, the stores are hosting all-day parties with raffle prizes, giveaways, music and “fun for the entire family.” For those who overdo it on the Fourth and feel like a juice cleanse is in order, Clean Juice is offering $10 off from July 5 through the end of the month.

Fourth of July Party at Eight Row Flint, 1039 Yale: Open 2 p.m. to midnight, the popular Heights bar is serving all the elements needed for a proper Independence Day celebration. The watermelon is free and the drinks are cold. Amp up the party factor with $2 Jello shots or pick a low-alcohol “sessionable” cocktail for $7 so you can hang out longer. Alternately, just go with a classic margarita, mule or old fashioned for $6. Beers from nearby Eureka Heights brewery are $4. Happy hour runs all day (just like it does every Wednesday) and features $3 tacos and select beers for the same price.

4th Of July Spectacular at Emmaline’s, 3210 West Dallas: This is the first Fourth of July for the new-ish restaurant and there is some fun in store. There will be live music and adult snow cones sponsored by Campari (and kid ones as well). Proceeds from the snow cone sales benefit the Buffalo Bayou Partnership. From 7 to 11 p.m., guests can take advantage of the free shuttle to and from Freedom Over Texas at Eleanor Tinsley Park. Call (713) 523-3210 for reservations; walk-ins also welcome. Visit the Facebook event page to stay on top of the details.

Pig Roast Party At Goode Company Armadillo Palace, 5015 Kirby: The longstanding Rice Village spot known for live music, barbecue, and, of course, an enormous metal armadillo sculpture, is hosting a party the day before the Fourth called “Red, White, and ‘Que (with liberty and tacos for all!).” It’s on July 3 from 4 to 10 p.m. Live acoustic musicians are playing on the patio while The Guzzlers rock the dance hall. Armadillo Palace is roasting a whole pig over a wood fire for the event. With a special of two carnitas tacos and a domestic beer for $10, everyone can get a little taste of the results.

Buy-One-Get-One-Free Entrées at Jax Grill, 6510 South Rice and 1613 Shepherd: The casual eateries are both offering buy-one-get-one-free deals on entrées. The special is only available on the Fourth of July, only good for dine-in and the free one has to be of equal or lesser value.

$6 Margaritas at Molina’s Cantina, 3801 Bellaire and 7901 Westheimer: Houston’s oldest Mexican restaurant company comes through with a margarita deal nearly every holiday and the Fourth is no exception. House margaritas are $6 and for the food deals, stop by between 11 a.m. and 4 p.m. to take advantage of lunchtime pricing.

Patriotic Desserts at Ooh La La, multiple locations: Pastry chef Vanessa O’Donnell never has a shortage of beautiful themed desserts for the holidays. There are plenty of red, white and blue choices for the Fourth of July, including Jumbo American Flag Cupcakes and Tres Leches or Creme Brûlée with fresh berries. There’s good ol’ apple pie, too.

Take A Fajita Dinner Home From The Original Ninfa’s on Navigation, 2704 Navigation: Feed a whole group at home with ease with a Fourth of July to-go special. Available from July 1 through 4, this revered Tex-Mex restaurant is offering a large order of fajitas (beef, chicken, vegetable or a combination), chile con queso and two agua frescas for $45. Add tres leches cake or the “Ninfarita” mix to make margaritas at home for an extra $10 (or, add $20 and get both, which is what we’d do).

Free Appetizers For Veterans at Peli Peli (multiple locations): The Vintage Park, Galleria and Katy restaurants are all offering a complimentary appetizer (valued up to $16) with an entrée purchase to veterans from now through the Fourth of July. Each location is closing slightly earlier than usual as well: the Galleria and Vintage Park at 8 p.m. and the Katy one at 9 p.m.

The “Observation Deck” at Poitín, 2313 Edwards: The newly opened restaurant at Sawyer Yards named for Irish moonshine has a wide-open view of the downtown Houston skyline. Poitín is capitalizing on what will likely be a stunning view of the fireworks by transforming the 1,200-square-foot patio into an “observation deck” ideal for mingling. There are no specials, though. The regular dinner and drink items are being served.

Firework Watch Party at Urban Eats, 3414 Washington Avenue: The rooftop terrace at this restaurant is an ideal place for watching the downtown fireworks display. To help celebrate, Urban Eats is extending happy hour from 3 to 10 p.m. Cocktails and bottled beer are half off. There’s also a $4 menu of house wine, draft beer, well cocktails, signature sliders and pommes frites. (That’s fancy talk for “French fries.”)

Buy-One-Get-One-Free Entrées at The Union Kitchen, multiple locations: Restaurateur Paul Miller owns both Jax Grill (above) and The Union Kitchen. Consequently, both are running the same buy-one-get-one-free entrée special. The special is only available on the Fourth of July, only good for dine-in and the free one has to be of equal or lesser value.