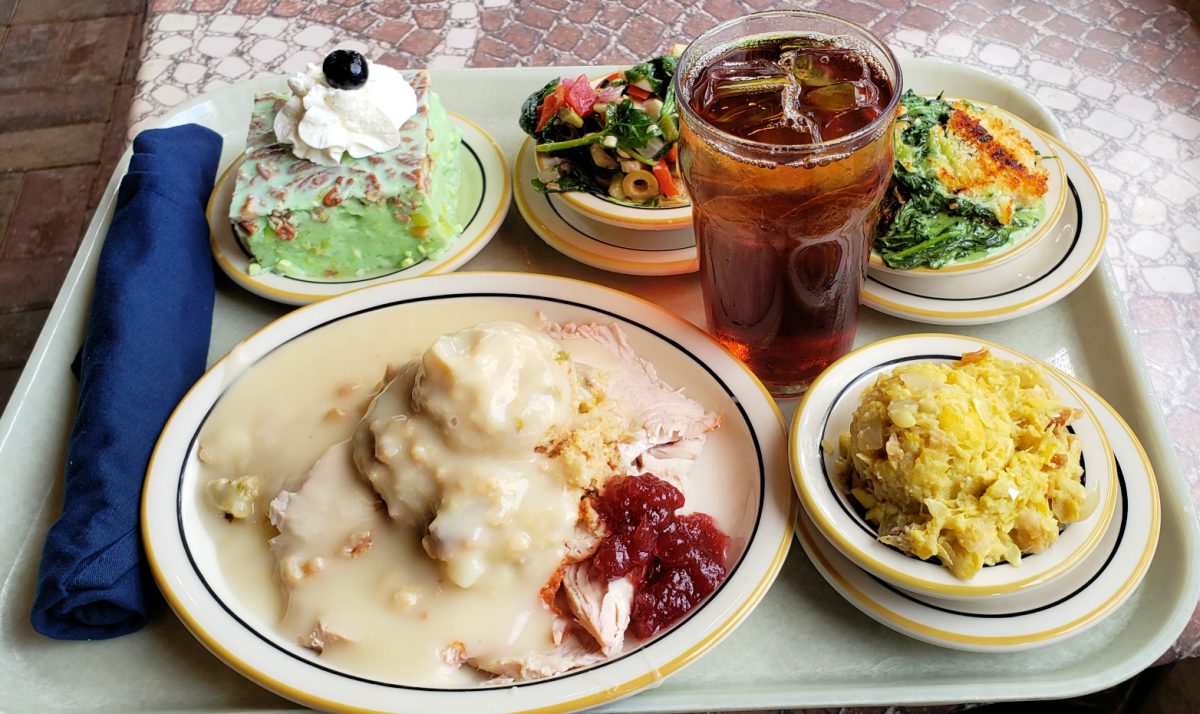 The early birds at Cleburne Cafeteria, located at 3606 Bissonnet, get the prettiest view of the lunch line’s symmetry and color: the unbroken cracker crust of the squash casserole, the white mountain of mashed potatoes and the uncarved boulder of roast beef. Ladies in matching black dresses will soon be trading out empty pans of baked haddock almondine and trays of cornbread muffins for new ones. Some of these women have served the same customers for upwards of 20 years and a dozen of the cooks in the kitchen have been churning out comfort fare such as meatloaf and greens for over 35 years. We were invited to reacquaint ourselves with the classic dishes and the modern touches that have been added over the years.

The restaurant’s accolades come from more than patrons. In 2019, Food and Wine named Cleburne the Best Cafeteria in America. Food writer David Landsel granted the honor as much for the friendly atmosphere as the tasty food. “There are other restaurants that will present a greater challenge to your palate” he writes, “but there are few that sum up Houston quite so neatly — an unpretentious coming together of peoples from all over the world, sharing a love of honest cooking of any kind.”

George Mickelis, Cleburne’s wide-grinned owner, is ever-present, chatting up the guests like his parents did before him. Mickelis is a stickler for buying local and organic ingredients that staff pile onto plates nearly thrice as high as the chains. Mickelis says that even as a boy, he knew he wanted to run the cafeteria. He attended the University of Houston’s Hilton School of Hotel and Restaurant Management, but his real education was watching his parents, Nick and Pat, whose smiles bear a striking resemblance to George’s today. Pat, now 92, still visits to eat her favorite: chicken and dumplings, a recipe that hasn’t changed since 1941.

Nick Mickelis bought the cafeteria on Cleburne and Fannin in 1952 from Anabelle Collins and Martha Kavanaugh, who opened the establishment in 1941. He planned to convert it to a barbecue joint but the regulars weren’t having it. They wanted the quirky restaurant with two live trees growing in the dining room to stay exactly like it was, so that is what Nick and Pat decided to do, also opting to keep the lemon tarts and fried catfish people loved.

By 1969, Houston was growing. The residents of Riverside Terrace, the upscale neighborhood adjacent to the original spot, had all moved to the suburbs. The family knew they needed to move. Nick bought an existing cafeteria on Bissonnet, quite a distance from the original. In order to not lose any familiar faces, Nick wrote a letter to each and every customer he knew — approximately 350 — inviting them to visit the new location. The personal touch worked then and it still does today.

Two building fires later, the current digs are completely modern but the regulars still display a sense of ownership as they line up for chicken fried steak and creamy spinach casserole. They point out the paintings on the wall, saying, “Those were all painted by Nick, the owner.” Patrons, unprompted, also tell strangers in line stories of charity coupons given out to benefit B’nai Brith Women, of the two fires that almost destroyed Cleburne Cafeteria or of the hidden rooms in the original building. There are recommendations, too: “They have the best turkey and dressing you’ve ever eaten” and “This is the same Jello salad my mother made”.

The nostalgia is palpable. The food is decadent and comforting, even the lighter dishes: lentils cooked with onion, poached salmon and Greek salad, which nods to the Mickelis family heritage. Vegetarian diners will find macaroni and cheese, black-eyed peas and broccoli-rice casserole. Every 30 minutes, a fresh batch of cornbread, rolls or muffins is pulled from the oven and all of Cleburne’s pies, cakes, cobblers, puddings and tarts are baked in-house as well. Cleburne’s has its own butcher who hand-selects all of the USDA Choice beef that he cuts, trims and grinds daily to the restaurant’s standards. The poultry is always hormone-free and delivered fresh on ice. The cafeteria never uses anything imitation, and vegetables are sourced from the farmer’s market daily, many times organically grown.

George has added a few handy upgrades since the last fire in 2016. The newest location has a patio that’s perfect for social distancing, and guests can now pay with credit cards. There is a generous selection of wine and beer now, too. There are holiday dinner packages available whether you are gathering with family in real life or on Zoom. When the COVID-19 pandemic hit, Cleburne Cafeteria implemented an online ordering and curbside pickup system that seamlessly delivered orders to customers parked in designated spots in the large lot.

Cleburne’s Cafeteria is open Sunday through Friday (closed on Saturday) from 11 a.m. to 7:30 p.m.