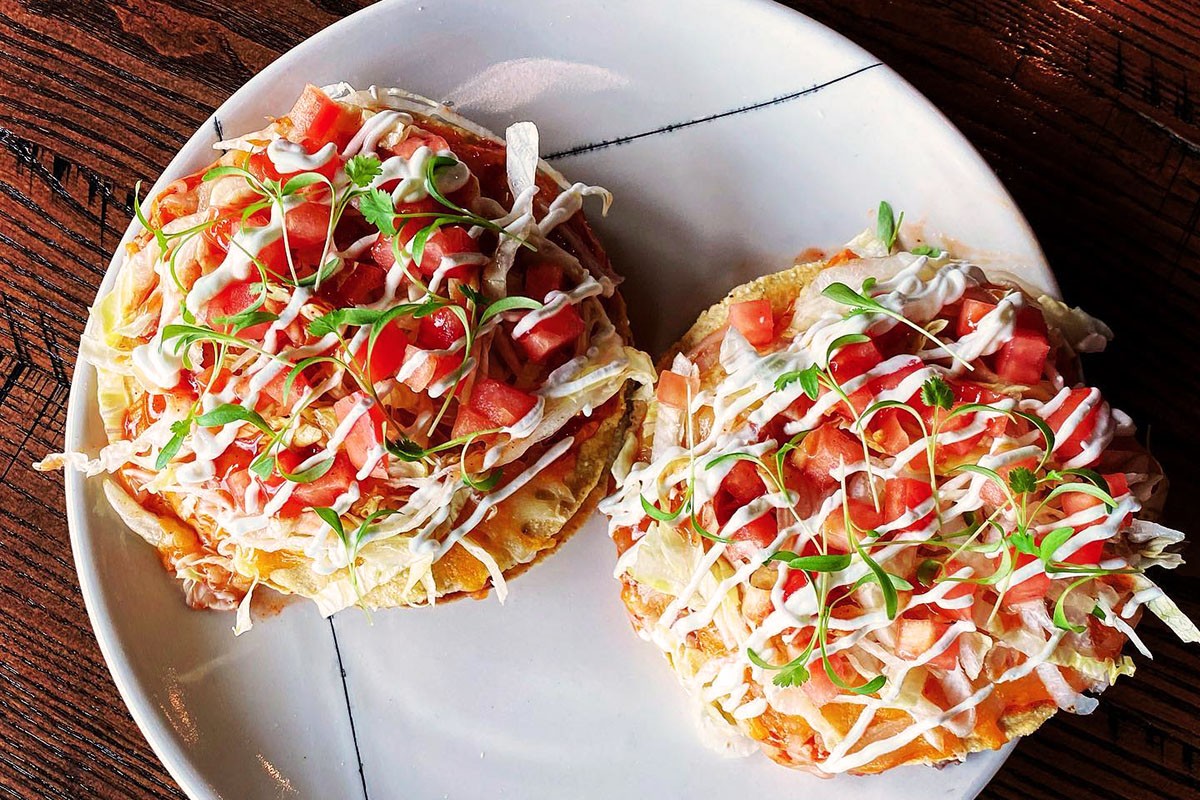 Chefs at Houston’s independent restaurants make their reputations on precision-crafted fare with luxurious or local ingredients, but there’s an industry truism. By the time restaurant workers finish mopping the kitchen and lock the doors, the only places still open for a late-night meal are bars, diners and fast food joints. These midnight munchies paired with childhood memories often stir up affectionate nostalgia for certain brightly lit, drive-through fare.

For Jordan Economy of Dak & Bop at 1805 West 18th in the Heights, Brandon Silva of Wooster’s Garden at 3315 Milam in Midtown (and forthcoming restaurant Degust), Ryan Lachaine of Riel at 1927 Fairview in Montrose and Caroline Cobell of Caroline’s — A Healthy Eatery at 9440 Louetta in Spring, one of those memory-laced chains is Taco Bell. So, when the national franchise announced it was discontinuing on August 13 several menu items  — including the Mexican Pizza, 7-Layer Burrito, Nachos Supreme and all potato dishes — each began creating their own versions. Taco Bell also quietly removed Pintos & Cheese from the menu in 2019 — although you may still be able to order it off menu if you’re nice about it.

Reddit users are so upset specifically about the Mexican Pizza being removed from the menu that they’ve locked the Taco Bell chat board, instead redirecting visitors to a petition demanding the company reverse the decision.

Why the fondness for Taco Bell? “I have great memories with friends and family when we were low on funds and could go to Taco Bell and create a fabulous buffet of Mexican goodness for cheap! It’s so nostalgic!” said Cobell. Her renditions of the Mexican Pizza and Taco Supreme are gluten-free, Caroline’s — A Healthy Eatery’s specialty. The Mexican pizza has seasoned ground beef, housemade pico de gallo and shredded cheese atop two crispy tostada shells, while the tacos have seasoned ground beef, lettuce, shredded cheese, tomato and sour cream nestled inside crispy taco shells.

These are available every day for lunch, for dinner on Friday nights and brunch on Sundays. (Cobell plans to add more dinner times as demand increases.) However, these are not on the regular menu. Call ahead to order these “secret” items or dine in and ask for them by name.

Chef Jordan Economy’s inventive version of the Taco Bell Mexican Pizza is available now at Dak & Bop for only $7. “I really wanted to do this because I’ve been eating this for as long as I can remember,” he said. “Obviously, when I heard the news that they were taking it off the menu, just like many others I was beyond upset and immediately told the crew, ‘Well, it looks like we will be serving a variant of Taco Bell’s Mexican pizza’. I always thought of it as kind of a hidden secret with a cult following, but after Taco Bell released that it was being canceled, I realized I was not the only one who loved it. So, I want to make sure people can still get it even if it’s my twist on it.”

The ingredients of Economy’s version are Korean influenced, as is appropriate for Dak & Bop, which is best known for its Korean-style fried chicken. Topping his “Mexican” pizza are ground beef bulgogi, ssamjang refried beans, gochujang “fire sauce”, avocado mousse, cilantro, horseradish crema and smoked kimchi. “Even with the tweaks, my version is pretty neat,” the chef said. “You’d think it would taste drastically different, but everyone that’s had it says it’s a leveled-up version that still has a nostalgic element to it.”

Lachaine at Riel is working on his own Mexican Pizza rendition and plans to put it on his happy hour menu — possibly as early as next week. He says his is going to be completely from scratch, including the tostada shell.

Dear @tacobell, I can’t believe you did this to me after all these years. I think of all the late nights we spent…

Over at Wooster’s Garden, Silva is planning for an all-out celebration of the discontinued Taco Bell dishes. Cheekily called, “Yo Quiero Brando Bell” (remember the old commercials with the Chihuahua?), it runs from 4 p.m. to midnight (or until sell out) on Sunday, 9/20. “Taco Bell was one of my first childhood memories of eating out. My uncle and I would see how many Taco Supremes we could crush in one sitting,” Silva said.

Silva is creating his own versions of the Double Decker Supreme, Mexican Pizza, Enchirito, Supreme Nachos, Fritos Burrito, Grillers Loaded (beef or potato) and Pintos & Cheese. To keep up with the event details, check out the Facebook page.