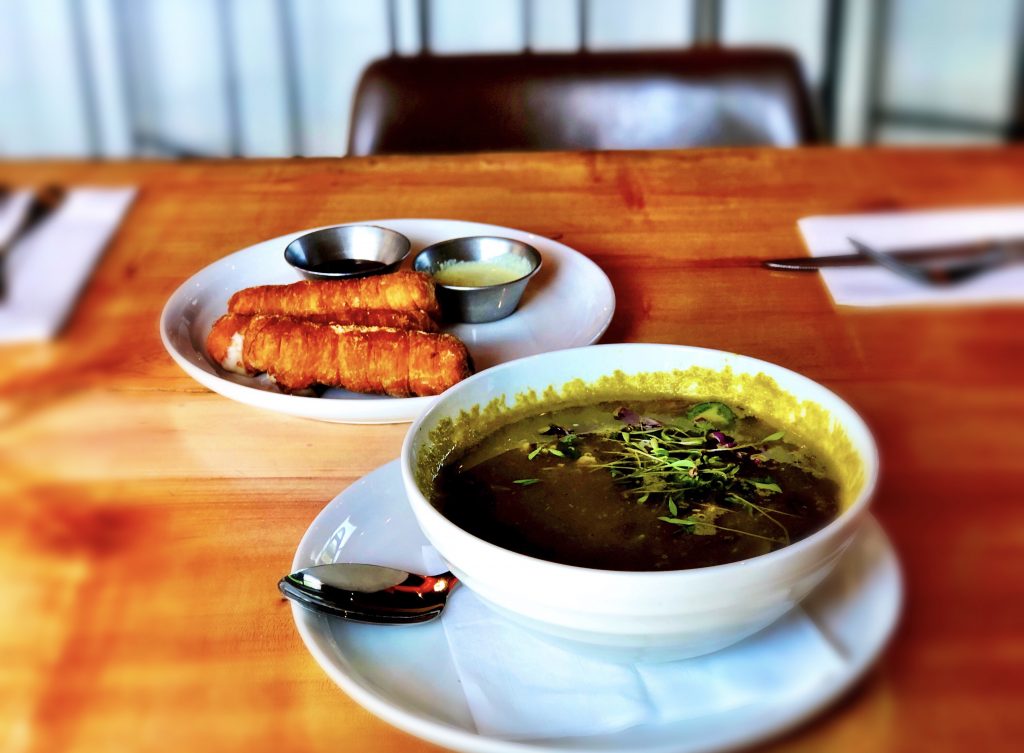 Mastrantos, the inviting haven at 927 Studewood in the Heights, opened in December as an exploration in global flavors. To develop the menus, Xavier Godoy, who was born in Spain but grew up in Venezuela, and his wife, Mari Godoy, a native Venezuelan, drew on their long-term overseas residencies in South American and the Caribbean.

Xavier also traveled extensively thanks to a prior career in oil and gas. On each trip, he would stay an extra day to tour the local markets and sample the street food. Prior to opening Mastrantos, the duo also spent a few months in Italy working at neighborhood trattorias and learning how to make the pastas that would become central to the Mastrantos menu. Starting slowly, they first offered dinner at the restaurant and then added breakfast before recently unveiling their first lunch menu. We were invited to try it.

Days later, I’m still thinking about the comforting flavors of chef Tony Castillo’s pozole verde: a rich, warming broth steeped with charred poblanos and roasted tomatillos. It’s laced with a generous helping of tender shredded chicken and soft hominy, cooked just enough that they retain a satisfying hint of chewiness. The pozole is based on his wife’s recipe and is a perfect introduction to the new lunch service.

Unlike some of the “fusion” foods of the 1990s — that often added little more than panko and wasabi to every dish — Mastrantos’s dishes are a natural evolution of the Godoys tastes as well as those of executive chef Castillo, whose mother is Filipino and father, also a chef, is Mexican, and pastry chef Eliu Palacio, whose family is from Spain and Oaxaca. This multifaceted approach to what they call “elevated casual” is a natural fit for Houston’s diversity and is reflected in the new seasonal lunch menu.

Based on the dishes I tried as a guest of the restaurant, the wait for lunch was worth it. The focused menu features six starters, including the luxuriant pozole and tequeños, or Venezuelan cheese sticks, made from a fried pastry dough developed by Mari that cocoons gooey queso blanco. These are not just tasty for adults — kids will surely love these, too.

There are three pasta dishes highlighting Palacio’s housemade noodles. The pomodoro gnocchi — pillowy dumplings bathing in a lush sauce made from tomatoes the Godoys imported from friends in Italy — is a fitting reflection of the Godoys’ travels.

The savory side of the menu is rounded out with four internationally inspired entrées representing Cuba, Vietnam, Venezuela, Mexico, and the Middle East. It’s like a virtual drive through southwest Houston. One highlight is the Chicken Arepa Tostada. Based on Venezuela’s reina pepiada, Castillo mounds a creamy avocado-and-chicken salad on two tender-on-the-inside-crunchy-on-the-outside masa cakes. It was slightly under-seasoned for my jaded palate, so I punched it up with a piquant green salsa. My daughter, however, loved it as is.

My only regret is that I didn’t get to try everything on the lunch menu, including Palacio’s decadent-sounding desserts. I’ll definitely be back for lunch, dinner or breakfast — or all three.

Now that Mastrantos serves its family-friendly-yet-adventurous menus all day, it is poised to become a neighborhood classic.

Houston Food Finder21 hours ago
ICYMI: Interested in traveling the world in your search for the perfect dish? Phaedra Cook has the scoop on Houston Chef Johann Schuster, former chef/owner of Charivari, and his big plans for tasting international cuisine.
#houstonchefs #houstoneats #houstonfoodfinder #houstonadventures

Houston Food Finder with Roma Ristorante.22 hours ago
As always, Roma Ristorante is participating in Houston Restaurant Weeks 2021! Journey to Italy with a three-course dinner for $35 per person. Three dollars from each goes to the Houston Food Bank. Selections include vegetarian and gluten-free dishes. Choose from starters such as creamy Imported Buffalo Mozzarella With Housemade Pesto And Mixed Greens, crispy Fried Shrimp And Calamari With Marinara And Artichoke Sauce and hearty Meatballs With Cheese And Basil. The second course includes pasta options like spicy Orecchiette With Housemade Italian Sausage (a specialty of Chef Scarafile) and Strozzapreti with Fresh Shrimp and Housemade Pesto. Entrées include earthy Eggplant Parmigiana, Chicken Breast Stuffed With Prosciutto And Grana Padano and decadent Veal Scaloppine. Pair your meal with a selection from our extensively curated wine list. Reservations are encouraged but not required. Visit the https://romahouston.com/ for the full menu, or call (713) 664-7581 for more information.