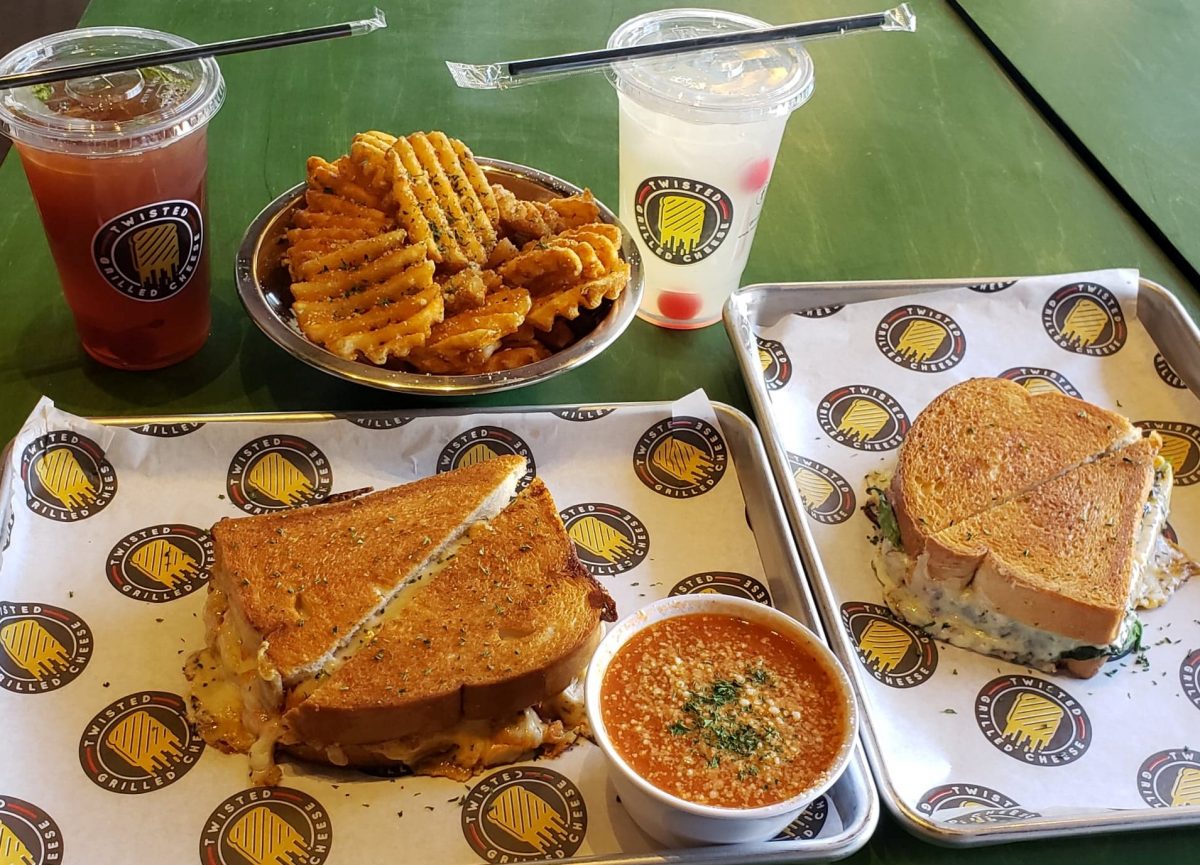 For many, a grilled cheese sandwich is the perfect comfort food. However, Twisted Grilled Cheese‘s new brick-and-mortar shop at 5555 Washington takes it to another level. In a little over a year, this specialty grilled cheese-maker has gone from a food truck with a massive Instagram following to a two-truck operation and, now,  to opening its first real restaurant in the spot once occupied by Coco’s Crepes

The food trucks were already serving a diverse selection, which included riffs on grilled cheese such as Buffalo Chicken and Halal Philly Cheese Steak. However, at the new restaurant, Twisted has expanded the menu with new sandwiches, sides and desserts, and alcoholic beverages are coming soon. Houston Food Finder was invited to try of a few items Twisted’s brick-and-mortar location is introducing to loyal fans and new comers.

The Washington Avenue location has a whopping 13 grilled cheese sandwich variants on the menu, ranging from $8.99 to $15.99. We tried two of them. The first was The Tarragon Lobster ($15.99). Though the sandwich sounds like it could be a gimmick, its blend of tarragon-accented lobster salad, Old Bay mayo, pickles, Gruyere and provolone was a well-seasoned and balanced bite. The second grilled cheese sandwich that we sampled was one of the new vegetarian options, The Spinach Artichoke ($10.99). It features baby spinach, artichokes, mushrooms and mozzarella, provolone and Gruyere, and it’s hearty enough that even avid meat eaters will enjoy it. Both sandwiches were well-executed, showcasing an eye-catching cheese pull and bread griddled to a crunch that should be considered a standard for grilled cheese. A notable detail: both sandwiches were filling meals, even before adding sides.

Speaking of sides, there are numerous options, including seasoned French fries with various toppings, Truffle Onion Rings and Mac & Cheese Balls and that classic grilled cheese pairing, tomato basil soup. On our visit, we tried the Parmesan Waffle Fries, which were golden-brown, crispy and topped with an herb-seasoned grated Parmesan, and the tomato basil soup. Twisted didn’t try to fix something that was not broken. The soup was exactly what one would expect and good enough to just drink on its own.

To end your meal, if you have room, there are several dessert options, including double chocolate chip chocolate cookies, cheesecake doughnut holes and sweet sandwiches such as The Nutella Dessert Sandwich.  For drink options, guests can choose from a house limeade, Twisted Tea and a few different shakes, such as the Peanut Butter Cup shake. Eventually, there will also be some boozy shakes.

For a newly opened restaurant, Twisted’s service was organized and friendly. The space is lively and energetic with a bright, colorful, horseshoe-shaped bar as the centerpiece. There are eclectic murals lining several of the walls, including one of a memorable skateboarder with a grilled cheese sandwich for a head.