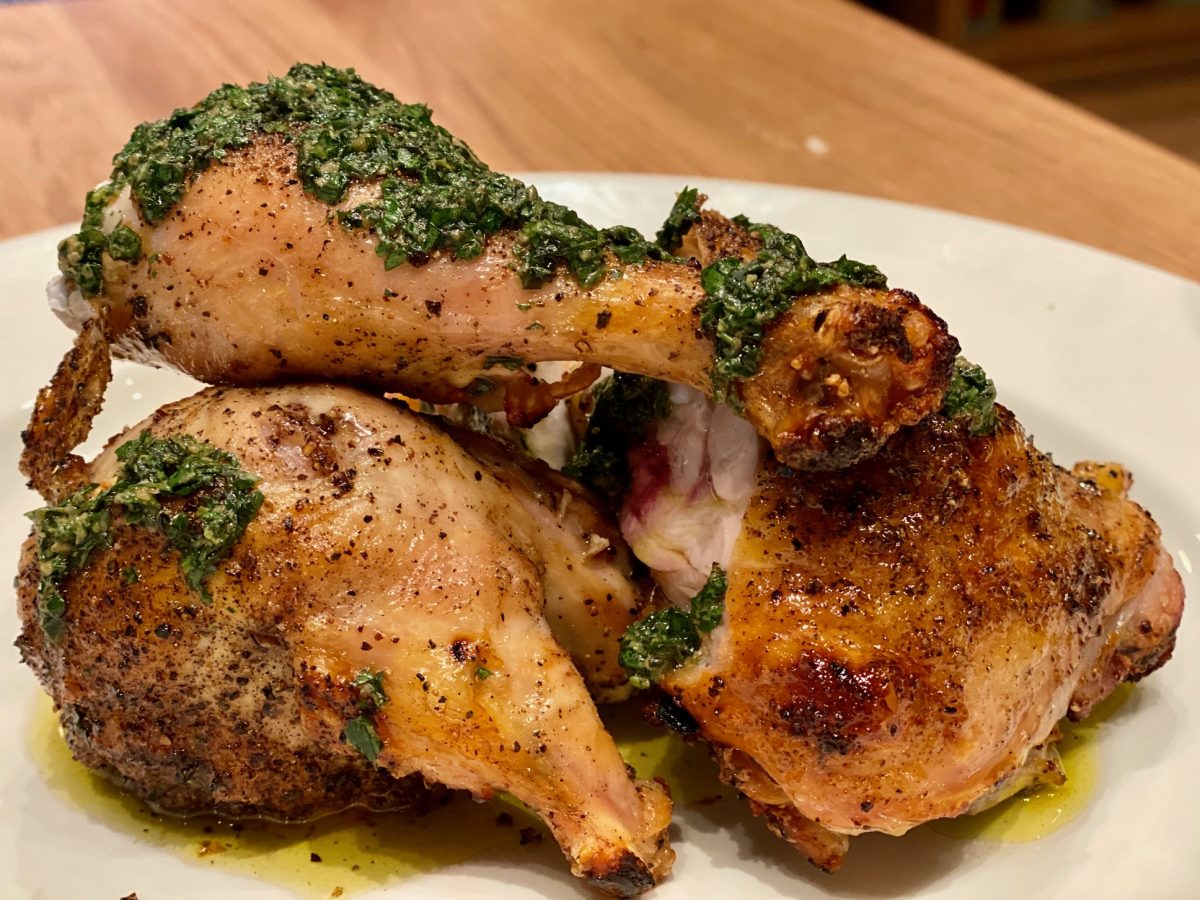 Roasted and coated in a lemon and herb jus, the half chicken is a specialty at Ostia. Photo by Sandra Crittenden.

Last week, Ostia, which means “host” in Italian, officially opened its doors in Montrose at 2032 Dunlavy. The name was no accident. Italian influences, along with other Mediterranean flavors, weave their way in and out of the New American-style dishes offered by Owner/Chef Travis McShane. McShane grew up in Kingwood and attended the University of Texas prior to his culinary training in New York. After a decade of working with Jonathan Waxman in several establishments around the country, he and his wife were ready to return to Houston and open their own restaurant.

Upon arrival to Ostia, guests will notice the many outdoor seats. There are umbrella topped tables and seating under a covered patio attached to an enclosed area known as the Greenhouse Room that has its side doors opened wide. Inside, the main dining room’s airy interior, a warm and unpretentious atmosphere awaits with lots of natural wood, greenery and comfortable brown leather booths, along with a welcoming bar and a fully exposed kitchen.

We opted for an inside table in order to watch the kitchen crew. Once seated, masked servers immediately offered water, checked on preferred beverages and handed us single-use paper menus. The farm-to-table bill of fare, which is expected to change with the seasons, is divided into five categories: appetizers, salads, pastas, main courses and vegetables. It also includes a note mentioning a family-style tasting for $60 per person, which sounded interesting but a minimum of six guests is required.

After inquiring about portion size and ease of sharing, we decided to order one item from each section except dessert, which we anticipated ordering as well. Starters range from crudo to duck liver pâté. Our server recommended some of his favorites. We took his advice and started with roast peppers, eggplant and ricotta salata on toast.

The wine list was accessible through a QR code that guests scan using their phones, and Master Sommelier Jack Mason was quick to offer his assistance as we planned the rest of our meal. We ordered a bottle of Matthiasson Chardonnay he recommended, which was an excellent pairing for our selections. Both the toast and the wine arrived moments apart. We placed the rest of our order and settled in to enjoy our first course and watch the kitchen in action. The crunchy, toasted baguette pieces were fully dressed with caramelized vegetables that were delicately topped with salty ricotta salata, fresh herbs and drizzles of balsamic and olive oil. The four flavorful pieces, each just a couple of bites in size, were quickly consumed.

From the four salads that were offered, we chose the Little Gem with walnuts, guanciale (jowl bacon), polvorosa (an Iberian cheese) and a mascarpone dressing. Fresh, tangy, salty and slightly sweet, we enjoyed every bite of this appetizer-sized salad that provided two side-salad servings. The other three options were stracciatella cheese with stone fruit, tomatoes and olives, a classic Caesar and shaved cauliflower with spinach, golden raisins and pistachios.

The next menu section features three housemade pastas and a seafood risotto. At our server’s suggestion, we opted for the bucatini with walnut-sage pesto and pecorino. It arrived in a single bowl that was split into two portions at the table. Served al dente, the herbal and nut flavors coated each strand. We found it very satisfying despite its simple description.

Ostia offers a focused selection of main courses: two fish dishes, a half chicken, two steak options and a pork chop. We opted for the chicken and had no regrets. The half bird was roasted and coated in a lemon and herb jus and served in four pieces. The chicken, which pulled easily from the bone, was succulent, tender and juicy. With this dish, we were also served our choice from the vegetable options. We were initially leaning towards the green beans with preserved lemon and hazelnut dressing but opted for the marinated summer squash in balsamic. This was our only misstep. The dish was tasty but we were surprised that it was served cold. I think we would have enjoyed it more with the pork chop or hanger steak. Sweet corn with aioli and pecorino and crispy potatoes rounded out the vegetable choices.

For dessert, the cannoli are the decadent way to end a meal. These were outstanding. A thin, crisp shell was filled with luscious cream and dusted with powdered sugar and topped with drizzles of honey-rum syrup. Mason suggested pairing this with a Vin Santo, which was spot on. We finished our meal with an enjoyable cappuccino.

McShane is creating something special and Houston will be glad that he has returned to his hometown to do it. While it is being billed as a neighborhood restaurant, it will certainly also become a destination for those outside of Montrose.

Ostia is currently open for dinner 5 to 10 p.m., Tuesday through Thursday; 5 to 10:30 p.m., Friday and Saturday and 5 to 9 p.m. on Sunday. Lunch is currently served Thursday through Saturday from 11 a.m. to 3 p.m. Reservations are recommended.

Houston Food Finder2 hours ago
Thanks to a fully fledged restaurant serving a menu created by Ryan Hildebrand and overseen by Efrain Villarreal Jr., as well as a freestanding ice cream stand and bar for the over-21 set, gamers who visit The Palace Social can be well-fueled and play for hours. Ryan Kasey Baker visited and has the details on this new, fun destination for kids of all ages.

Houston Food Finder with Roma Ristorante.8 hours ago
As always, Roma Ristorante is participating in Houston Restaurant Weeks 2021! Journey to Italy with a three-course dinner for $35 per person. Three dollars from each goes to the Houston Food Bank. Selections include vegetarian and gluten-free dishes. Choose from starters such as creamy Imported Buffalo Mozzarella With Housemade Pesto And Mixed Greens, crispy Fried Shrimp And Calamari With Marinara And Artichoke Sauce and hearty Meatballs With Cheese And Basil. The second course includes pasta options like spicy Orecchiette With Housemade Italian Sausage (a specialty of Chef Scarafile) and Strozzapreti with Fresh Shrimp and Housemade Pesto. Entrées include earthy Eggplant Parmigiana, Chicken Breast Stuffed With Prosciutto And Grana Padano and decadent Veal Scaloppine. Pair your meal with a selection from our extensively curated wine list. Reservations are encouraged but not required. Visit the https://romahouston.com/ for the full menu, or call (713) 664-7581 for more information.