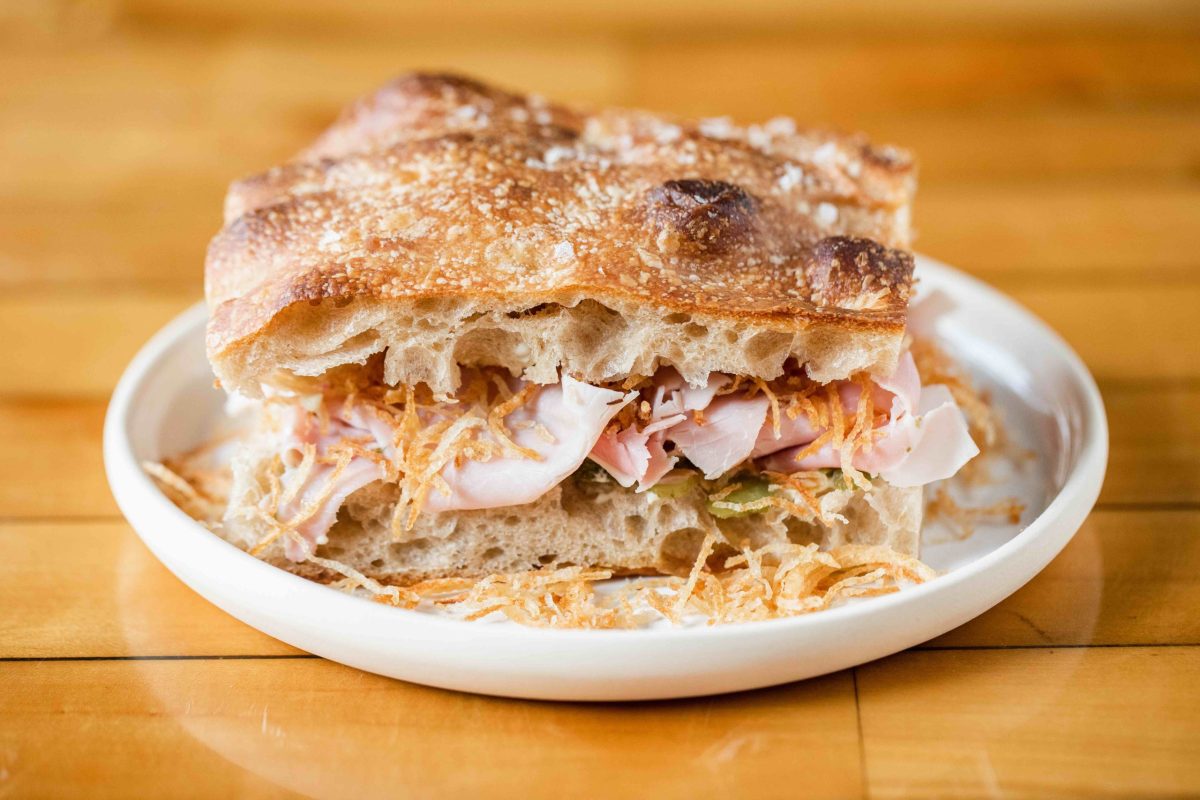 On a recent Friday morning, I walked into Cafe Louie, a new Second Ward eatery at 3401 Harrisburg. The barista already knew my go-to coffee drink, a flat white, which I’d ordered on my previous visit. Though it’s only been officially open since May 11 (following a quiet, soft-opening), the café already feels like a friendly neighborhood restaurant that residents will visit regularly for breakfast, lunch or an early dinner.

The warm-yet-modern space, designed by rootlab, is punctuated with wood tones, pink barstools and shelving, and pastel green accent walls that have turned the former industrial space into a welcoming bistro. But to be a successful all-day community gathering spot, it needs more than pretty fixtures; it also has to have good food. Siblings and native Houstonians Angelo Emiliani and Lucianna “Louie” Emiliani, the restaurant’s namesake, are providing just that. The duo are combining their kitchen prowess to create a focused selection of pastries, sandwiches, bowls and more.

Angelo cut his culinary teeth at well-regarded establishments such as Uchi, Thomas Keller’s Ad Hoc and San Francisco’s legendary, James Beard Award-winning bakery, Tartine. He also worked with James Beard Award-winning pizza maestro Chris Bianco, whose Pizzeria Bianco in Phoenix is considered one of the best pizza joints in the country. In fact, pizza is how some Houstonians might know Angelo’s cooking. After returning to Houston during the pandemic, he launched Angie’s Pizza, and online preorders for his highly regarded pop-ups often sold out within minutes.

Louie, who runs the pastry program, began her career at Houston’s Tiny’s Milk & Cookies. She eventually joined her brother in California, where she worked at such esteemed bakeries as the aforementioned Tartine in San Francisco and James Beard Award-semifinalist Lodge Bread Company in Los Angeles.

Shortly after Cafe Louie opened, my daughter and I stopped by for lunch. As you do at many casual eateries in Houston, we ordered at the counter. As we waited in line, we perused one of the colorful menus, which is divided into four sections: pastry, beer and wine, coffee and tea, and plates. We ordered, took our number and seated ourselves. Even though the restaurant is new and the tables were full, the Preserved Lemon Chicken with cured carrot salad and poached egg served in a bowl over vadouvan rice, Ham Sammich (not a typo) and flat white we ordered arrived quickly.

The egg was perfectly cooked, with soft-but-set whites and runny, golden yolk. The chicken was tender and the accompaniments were flavorful, making for a lovely light lunch. The ham sandwich was a revelation. The café’s team transformed the mundane combo of bread and ham into a minor work of art. The crisp-yet-pillowy foccachio-style bread helped elevate the sandwich, but the real stroke of genius was adding crispy-fried potato strings. I found myself gathering up the fallen potato shards and tossing them on the chicken for added crunch. These should be an add-on option for every dish. I’ve even been making them at home to add texture to salads, green beans and roasted vegetables.

Since lunch was such a hit, I  returned for breakfast. I opted for the McLouie. Its cheeky name is inspired by a certain fast food joint’s famous breakfast sandwich. Like its inspiration, it combines a sausage patty with egg, cheese and bread. Unlike its inspiration, it combines high quality ingredients into one of Houston’s best breakfast sandwiches. The patty is maple pork sausage that expresses hints of maple without being cloyingly sweet. The egg isn’t a bland yellow puck but a perfectly cooked sunny-side up egg (from Nacogdoches’ Swift Hill Farms) with a vibrant, orange yolk that transforms into a lush sauce when you take your first bite. Instead of a sad, soggy semblance of an English muffin, the Cafe Louie team layers these elements in a Redneck Cheddar gougére, a savory, French-style pastry made with cheese produced in Dublin, Texas. It’s toasted until it resembles a perfectly charred Neapolitan pizza crust. As they did with the ham sandwich, the Emilianis have turned the simple into the sublime.

If the food continues to be executed at this level, the bistro will likely become as much a dining destination as a neighborhood café. I’m already looking forward to returning to try other dishes such as Braised Garlicky Greens with chickpea purée, whipped tahini and dill-flavored rice. In addition, there is a rotating selection of pastries like the Date and Sesame Sugar Morning Bun, a coffee program fueled by local roaster Amaya Coffee (the Black Sesame Latte sounds intriguing), a tailored wine list and local craft beers on tap. There’s something else to get excited about: a full dinner menu is coming soon.

Adding to the establishment’s usefulness as a neighborhood hub, the eatery shares a space with Little Red Box Grocery, a bodega-like shop selling produce, locally raised meats, locally made products such as Cochinita’s Market Salsa Machis, and a few mainstream grocery items. It should be a welcome addition to an area with few grocery stores. Plus, it joins a growing number of establishments such as Kickin’ Kombucha/Cochinita & co., Henderson & Kane and Local Foods in Rice Village that are combining sit-down meals with local-focused food markets.

My only complaint: Cafe Louie isn’t closer to my house. But that doesn’t mean I won’t be checking Waze for traffic hacks and shortcuts to this neighborhood spot that is on track to being one of Houston’s best new restaurants of 2022. Until dinner service starts, Cafe Louie is open from 7 a.m. to 7 p.m. Wednesday through Sunday.