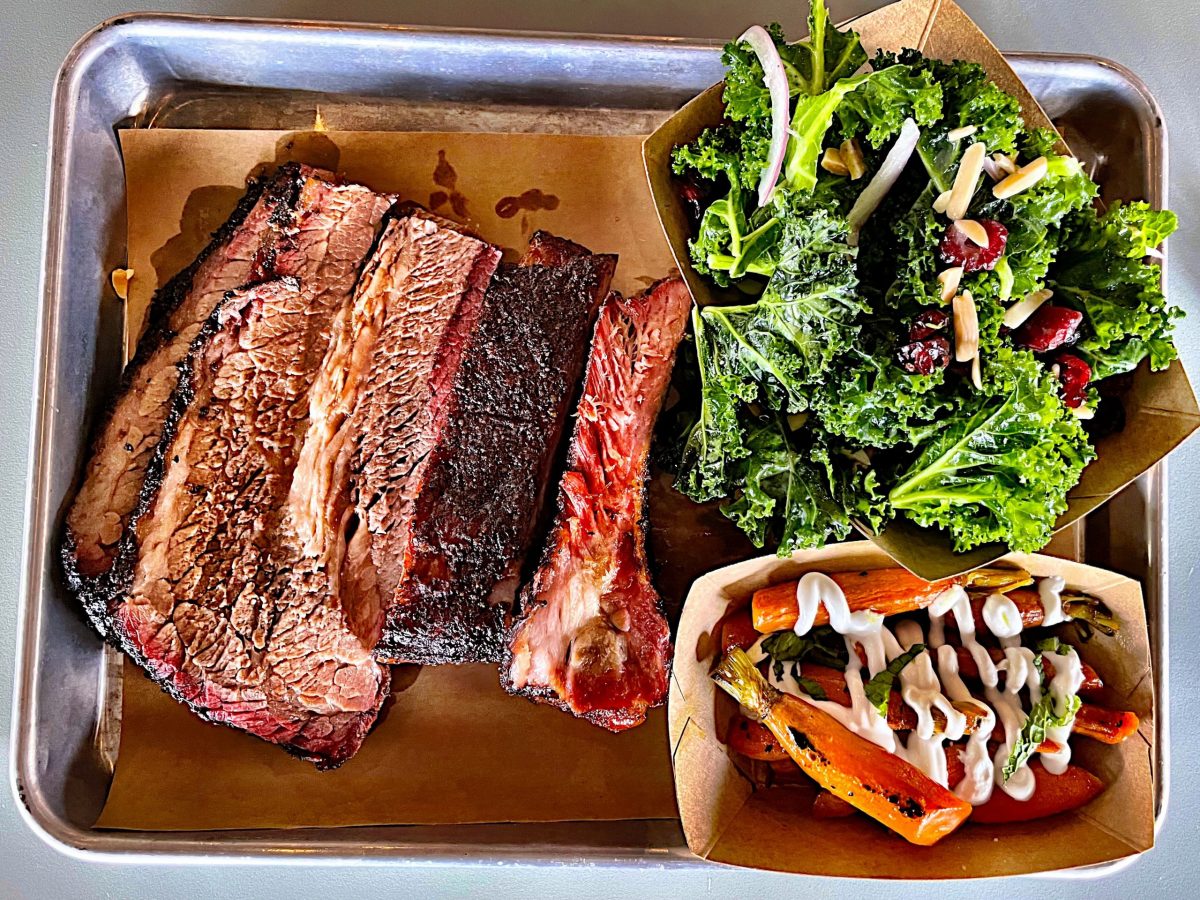 Growing up in rural Missouri in the 1970s and ’80s, “barbecue” meant a backyard gathering, not a method of cooking. The only things “low” were the webbed aluminum lawn chairs and the Igloo cooler. The only things “slow” were the June bugs lollygagging against the screen door. Don’t get me wrong, there was also meat — St. Louis spare ribs slathered with Maull’s BBQ Sauce and cooked over charcoal, grilled hot dogs and burgers, and, if my granddad was involved, a very rare T-bone, usually from a cow he raised.

Of course, later in my life, especially after 18 years in Texas (this time around) and a trip to Foodways Texas’s Camp Brisket, I came to understand that barbecue is also a cuisine influenced by multiple cultures — West African, African American, Indigenous, Mexican, German and more — focused on smoking meats low and slow.

Feges BBQ’s new brick-and-mortar location in Spring Branch combines both definitions of “barbecue,” creating a family-get-together atmosphere that serves expertly smoked meats. Located at the corner of 8217 Long Point (one of Houston’s great food roads) and Hillendahl — which is named after one of the German farming families that immigrated to the area in the 1840s — the spacious restaurant anchors the newly renovated strip center that also houses Tacos Del Julio, a long-time favorite that dishes up food inspired by Monterrey, Mexico, and newcomer Shoot The Moon.

Chefs and owners Patrick Feges and Erin Smith are no strangers to the Bayou City food scene. Before launching Feges BBQ as a pop-up, Feges, who earned a Purple Heart in the Iraqi war, cooked at Underbelly, Brennan’s, Killen’s Barbecue — where he honed his pitmaster skills — and Southern Goods. After working at acclaimed New York City restaurants Per Se and Babbo, Smith returned to Houston and helmed the kitchen at Plonk! Beer & Wine Bistro before becoming culinary director for Clumsy Butcher Group (the restaurant group that evolved into Chris Shepherd’s Underbelly Hospitality), where she perfected Blacksmith’s famous square biscuits. She was also the opening chef for Main Kitchen in the J.W. Marriott hotel in downtown Houston.

After a successful pop-up run, the couple opened the first Feges BBQ location at The Hub in Greenway Plaza, the food court that launched other Houston favorites: Greenway Coffee, The Rice Box and burger-chan. Feges’s adroitly smoked meats and Smith’s unique-for-barbecue sides, such as Moroccan Spiced Carrots and Elote Corn Salad — dishes that could stand side by side with those found at Houston’s best fine-dining establishments — quickly garnered praise from customers and critics. After being open just over a year, the first Feges BBQ landed a coveted spot on Alison Cook’s Top 100 list and was named one of “the top 25 best new barbecue joints in Texas” by Texas Monthly’s barbecue editor Daniel Vaughn.

At their new location, the couple has taken advantage of the large kitchen and dining room and developed a bigger, yet still focused, menu. There is, of course, a full selection of smoked meats sold by the half-pound. During a recent lunch visit, when the crowd included locals from nearby businesses, I indulged in both moist brisket, with a crackling, poignant bark, and tender pork ribs. Both were as good as those at the acclaimed Greenway location.

Customers can round out the Texas trinity with sausage or opt for boudin instead. In addition, they can choose brisket burnt ends, turkey, pulled pork or chicken.

But there is more to the new Feges BBQ than smoked meats. During a recent evening, when the diners were as diverse as the neighborhood, my wife and I returned for dinner and eschewed barbecue altogether. I choose the snappy southern fried chicken that came with a hint of heat, a charred slaw that was as crisp as a late autumn day (as opposed to a soggy, humid August afternoon), a flaky buttermilk biscuit and a couple of the sharp housemade condiments: gochujang BBQ sauce and Alabama white sauce.

Like my granddad would have, my wife opted for a steak: a perfectly cooked Porcini-Crusted Hanger Steak that came with roasted cauliflower and a jaunty romesco sauce. We also tried one of the classic sides, roasted Sweet and Spicy Brussels Sprouts, and one of the new additions, Spicy Korean Braised Greens, a generous heap of tender greens bathing in a zingy sauce.

To round out the “Mains”, there is the Feges BBQ Burger, a double-patty affair that has already garnered an “A” rating from the Houston Chronicle’s Alison Cook. In addition, patrons will find a Loaded BBQ Baked Potato, several sandwiches — including a fried chicken sandwich with riot sauce and a mouthwatering Brisket and Pimento Grilled Cheese. There are three salads, including the intriguing-sounding Charred Caesar. You can add your choice of smoked meats to any of them for a market-priced upcharge.

The lone appetizer is Cracklin Nachos. Yes, fried pork skins replace the tortillas chips in this loaded concoction that includes smoked queso and pickled jalapeños. However, if you want more starters, you can kick off your meal with one of the sides, such as Seasoned French Fries.

Though there may not be a well-stocked picnic cooler sitting next to your table like at an at-home barbecue, you can order from a selection of primarily local craft beers, ciders and hard seltzers (the modern equivalent to the wine coolers that would be found in an Igloo in the ’80s). But more impressive — and unusual for a barbecue joint — is the well-edited wine list offering both by-the-glass and bottle options. In addition, watch for regular Wednesday specials that feature a select wine for half off by the bottle or glass, and the occasional paired wine dinner or tasting.

No backyard-style gathering is complete without some options for the kids or dessert. Feges and Smith offer both. Those 12 and under can opt for a cheeseburger, grilled cheese or fried or grilled chicken (but no hot dog, yet). And you really don’t want to miss the delicate but decadent PB&J Chocolate Layer Cake that I’m happy to say made the jump to the new location.

All of these elements combine to create a minimally appointed yet cozy and family-friendly eatery that is well on its way to being both a barbecue destination, which should attract smoked-meat enthusiasts from around the state, and a useful neighborhood restaurant that will be serving memorable meals for years.