Essential Dishes: Where to Eat the Best Fried Chicken in Houston 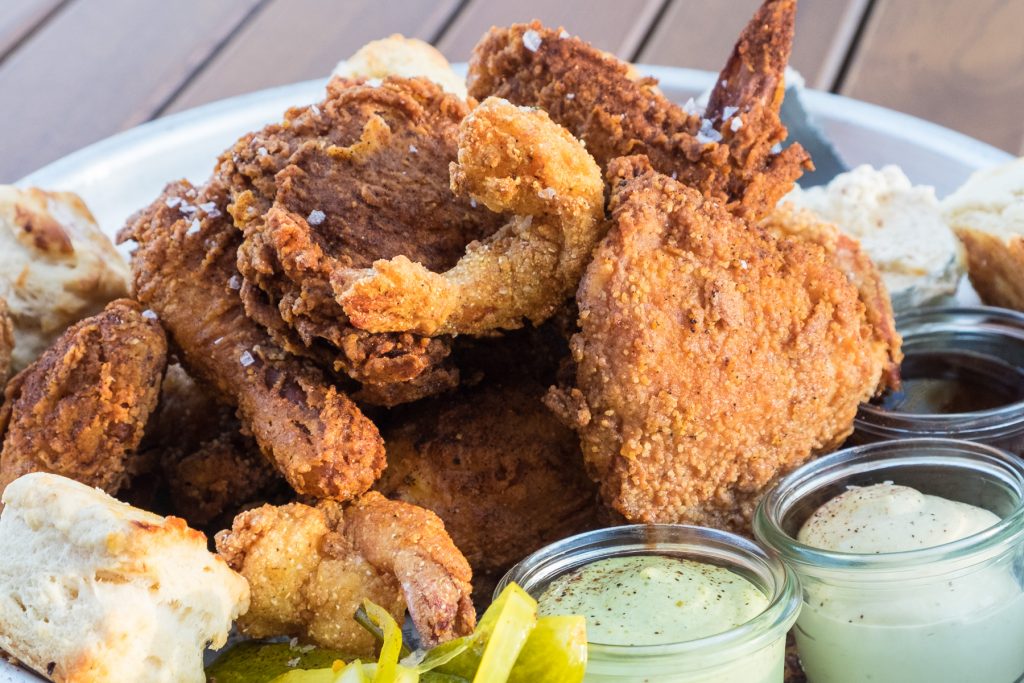 We continue our weekly series on Houston’s essential dishes with a look at the Bayou City’s finest fried chicken platters. If you’ve missed any of our previous stories in the series, catch up with the links below.

Despite the lascivious lies told by certain residents of the deep south, Texas is, in fact, a southern state. That culture may not extend as far west as El Paso, but in the tall pines of southeast Texas, the vibe is as southern and slow-cooked as anything south of the Mason-Dixon. Don’t believe us? Ask a Houstonian where to get the best fried chicken and you might just end up with a dissertation. While there are many strong opinions and recommendations on the subject, here are our picks for four of the best places in Houston for fried bird, depending on your mood and budget.

New Orleans native Percy “Frenchy” Creuzot opened his self-named po’ boy shop at 3919 Scott, a block from the University of Houston, in 1969. Not long after, he decided to add fried chicken to his Creole menu. The rest is, as they say, history. Frenchy’s is synonymous with fried chicken in Houston. It’s an institution as essential to the cultural fabric of the city as The Oilers and DJ Screw. Now a local chain with nine Houston area locations, the Scott Street location (now at 4646 Scott) is unquestionably the one to visit for an authentic Third Ward Frenchy’s experience.

Despite the acclaim and enduring legacy, the chicken at Frenchy’s is akin to fast food. Hell, it is fast food. The fried chicken is a soaked-napkin kind of greasy that’s best enjoyed after a bout of mild binge drinking. The Cajun spice mix will sober you up and put you to bed all at once. It’s fried chicken the way you knew it in college; the way someone with a grown-up metabolism should only occasionally indulge, lest they get a lecture from their cardiologist.

At the other end of the gourmet spectrum from our favorite college chicken joint, Lucille’s in the museum district is a sophisticated take on Southern Creole cuisine. The refined southern kitchen opened by chef-owner Chris Williams and his brother Ben in 2012 is named after their late great-grandmother, Lucille Bishop Smith. She was a trailblazer, entrepreneur, cook and restaurateur whose culinary legacy started over a century ago.

Today, her great-grandson’s restaurant features many of her original recipes — including her famous chili biscuits — along with several of William’s original, Lucille-inspired dishes. Among those original recipes is William’s take on southern fried chicken, the Yardbird. Two pieces of 24-hour brined and slow-fried chicken are served alongside smoked mash and sauteed collard greens with a honey-thyme jus. The thick, crunchy skin hides tender, fall-off-the-bone meat in an elevated presentation of a simple southern staple dish.

For a more traditional, country-fried Texas chicken dinner, look no further than the indelible Barbecue Inn. This family-owned and operated country diner opened in the Independence Heights neighborhood in 1946. An absolute Houston staple, Barbecue Inn is known, despite its name, for its fried chicken platters. Made to order in about half an hour, diners get a choice of white, dark or a southern-fried mix. Despite a lack of fine dining pedigree or a signature mix of Cajun spices, this fried bird ranks as one of the best in Houston for its simplicity. The fact that the decades-old family recipe remains unchanged speaks volumes about its quality and popularity through the years.

The Heights kitchen, next door to its perpetually busier sister concept, landed on just about every “best of 2018” list barely three months after it opened in October. Inside, a heavy ’70s aesthetic, the smell of wood smoke and fried seafood greet guests as they walk in. You can almost smell the salt air of the Gulf Coast standing outside on 18th Street.

Despite boasting a menu that abounds in seafood and Gulf influences, fried chicken is unquestionably the star of executive chef Bobby Matos’ show. Massive platters of extra-crispy fried chicken (half or whole bird) served with biscuits, pickles and choice of green harissa, honey sambal or oyster mayonnaise stack up as if they belong on an episode of Man v. Food. While the vibe is divey-chic, Matos puts a refined (if not tongue-in-cheek) chef’s touch on a menu that includes Pringles with caviar dip and an eye-popping selection of bubbles to pair with your fried bird dinner.

While still a relatively new entry to Houston’s dining scene, La Lucha’s fried chicken is unlikely to be left off many future best-of lists. A fine middle ground between the dish’s homey roots and its culinary potential, Fry’s version is both an homage to his grease-soaked childhood memories and a refined chef’s take on those influences.

Houston, in general Texas, may not be known for its fried chicken and collard greens. The soul food of the deep south is the culinary heritage of the region, just as Tex-Mex and smoked brisket are the culinary heritage of the Lone Star State. Still, our homegrown versions of such dishes are just as legitimate. Whether found in lazy country diners, Third Ward fast-food joints or elevated southern kitchens, fried chicken in Houston is undoubtedly essential to its cultural identity.