Essential Dishes: Where to Eat the Best Banh Mi in Houston 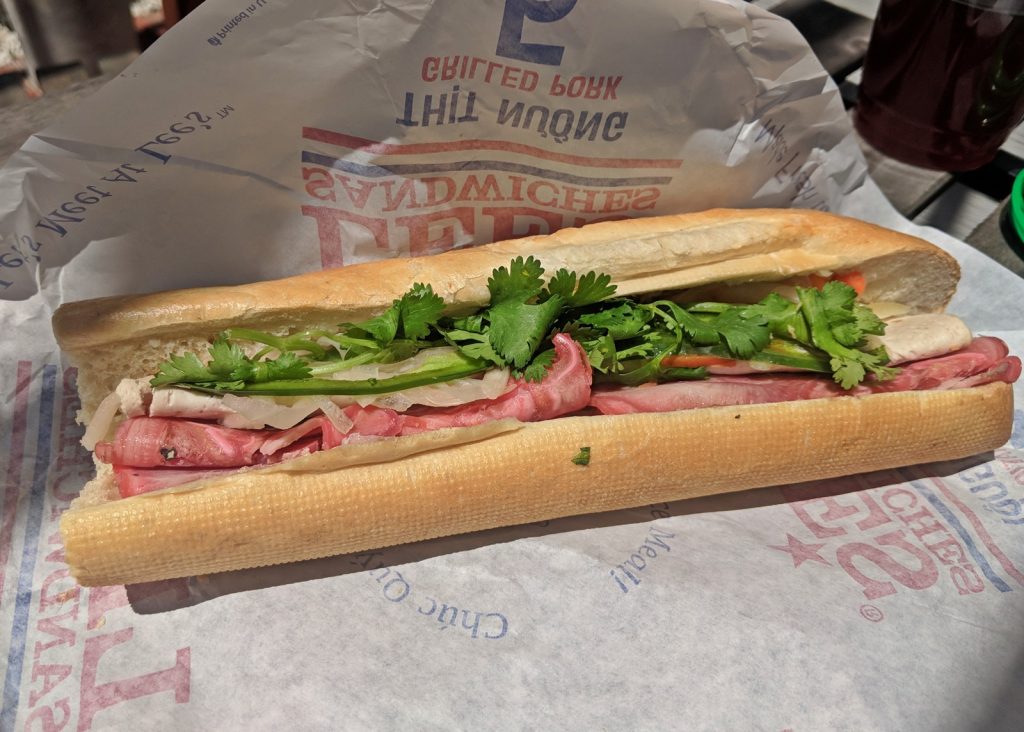 In the world of food writing and appreciation, we often find ourselves salivating over the lasting effects of colonization — an occupational reality that seems a bit wrong-headed. Still, there’s no denying the culinary progress made when two seemingly incompatible cultures meet. Such is the case in traditional Vietnamese food, a cuisine so strongly influenced by French occupation it has taken on those characteristics as part of its very identity.

Here in Houston, the post-war influx of Vietnamese refugees to the Gulf Coast brought that combination to a town and a state already well-acquainted with colonial fusion food. Food became a bridge towards cultural acceptance and one of the simplest and most beloved in the Bayou City is bánh mì.

Meaning “bread” in Vietnamese, bánh mì is a reference to the French single-serving baguette on which it’s prepared. A colonial import introduced to Southeast Asia in the mid 19th century, the baguette was a Vietnamese staple food by the early 20th century. Like a burger or a Mexican torta, there is no “official” bánh mì recipe. It’s a sandwich. Yet, the most traditional preparations involve grilled pork, cilantro, pickled carrots and daikon, spicy peppers (typically jalapeño in Texas), and sometimes pork pâté, all inside a toasted baguette sliced lengthwise.

Once only found in Asian communities like Midtown’s old Little Saigon, the bánh mì is now an essential element of Houston cuisine. As ubiquitous as tacos and burgers, it’s available in just about every neighborhood and on menus of all varieties. The following are our picks for Houston’s best bánh mì joints.

Les Givral’s Sandwich & Cafe, 2704 Milam: The story of Les Givral’s is somewhat fuzzy and, for the most part, lost to hearsay and conflicting accounts. A fire shuttered the beloved sandwich shop in 2001, after which a rent dispute and renovation expenses saw the fast-casual eatery switch hands. Whatever its origin story, the sandwich shop is an institution — and one of the few remaining Vietnamese businesses in Midtown.

A daily lunch rush forms a line of hungry patrons all itching to get their hands on the cafe’s signature Vietnamese sandwiches, which are served on airy, toasted baguettes and generously stuffed with meat and veggies. Packed full of pork and garnished with a long cucumber spear, cilantro and picked carrots, the chargrilled BBQ pork with pâté is a standard order. At under $4 across the board, Givral’s sells some of the most affordable bánh mì in Houston.

Lee’s Sandwiches, 11210 Bellaire: Despite its California roots, multi-state footprint and mixed reputation as the “McDonald’s of bánh mì“, Lee’s still serves some of the best Vietnamese sandwiches anywhere in the city. The Cali export has been a staple of Houston’s Vietnamese community since 2005. At 10,000 square feet, this food court-style cafe with multiple ordering counters and small isles of Asian groceries is the largest of all the Lee’s locations.

(It’s worth noting that according to the most recent census in 2010, the three cities with the largest Vietnamese populations are San Jose, Garden Grove and Westminster, all in California. Houston was fourth. It is going to be interesting to see where Houston stands in that list after the 2020 census.)

The best (and in this writer’s opinion, only) bánh mì at Lee’s is the customer favorite, Special Combination #11. More of a European preparation than those found in other shops, the French-inspired sandwich features cured ham, pâté, pickled carrots, cucumber, cilantro, jalapeno and that rare and unctuous French deli meat, headcheese.

Lee’s lasting popularity is due in no small part to its amazing bakery. While the sandwiches are heartily filled and tastefully prepared, it’s the perfectly crispy and doughy baguettes — baked fresh daily — that keeps their loyal customers lining up day after day for over fourteen years.

Cafe TH, 2108 Pease: Nestled into the far west corner of what is still technically EaDo, across the street from Kim Son, Cafe TH has been holding down the area’s Vietnamese heritage since the early 1980s — though ownership changed hands in 2007 leading to significant upgrades in decor and menu. A popular spot (and something of an open secret) for authentic Vietnamese fare of every variety, the café is best known for its “kitchen sink” style combination sandwich, the bánh mì thap cam.

Meaning “mixed” in Vietnamese, the thap cam is literally an everything sandwich. Pâté, pork roll, chicken cold cuts, pork meatballs, sliced and peppercorn ham fill a plump, single-serving baguette. The six kinds of meat are joined by mayo, sliced jalapeno, pickled carrots and fresh cilantro leaves for a sandwich that upgrades what is traditionally a snack or light breakfast into a full-fledged dinner.

Roostar Vietnamese Grill, 1411 Gessner: While we revere it for it’s simple pleasures and mix of European and Asian taste sensations, at the end of the day the bánh mì is a cheap and easy street food. Even the best Vietnamese sandwich shops in this or any city treat it like the casual vendor snack that it is. Most of them, that is, except Roostar.

At Roostar Vietnamese Grill, a Spring Branch favorite opened by University of Houston alumni Linda and Ronnie Nguyen in 2013, the bánh mì gets a special kind of reverence. There, ingredients like French mayonnaise, pâté and pork belly are made in-house from old family recipes. Bread is sourced locally from Slow Dough Bread Co. and filling options stray far from the standard deli meats and grilled pork offerings of most other shops.

The unquestionable fan favorite is the chopped ribeye. A Vietnamese take on bulgogi (Korean BBQ beef) that features tender marinated ribeye, all the classic bánh mì veggies and a smear of mild garlic mayo that rounds the whole thing out perfectly. We also highly recommend the pork belly and the classic BBQ pork.

Houston Food Finder14 hours ago
ICYMI: Two new Italian food concepts are making their way to Houston's Generation Park courtesy of Chopped champion Justin Turner this month! “We’re excited to open our doors officially and welcome the community to Bocca and Lupo,” says Turner. Get the details from Carlos Brandon below.

Houston Food Finder16 hours ago
One Fifth Houston's final anniversary dinner is just around the corner, and the menu features favorite dishes from all the past iterations of Chris Shepherd's rotating-concept restaurant. Get the details in Phaedra Cook's article.
#houston #houstonrestaurants #houstonevents

Houston Food Finder17 hours ago
Make Dry January a lot more fun while still keeping it (mostly) guilt-free. ;) Houston Cider Company’s award-winning Dry Cider has only 155 calories and two grams of natural apple sugar. It’s tart, crisp, and refreshing with just the barest hint of sweetness. Bonus: it’s made right here in Houston! Visit the website to order for pickup in the Heights — or choose our newly available shipping option!

Houston Food Finder18 hours ago
Those with fond memories of dining on Backstreet Cafe's patio may want to make a point of stopping by before Monday. The big old camphor tree that's graced so many with its shade is being removed.

Decades-Old Tree at Backstreet Cafe is Being Removed - Houston Food Finder
Owners Tracy Vaught and Hugo Ortega say an enduring source of shade and beauty at Backstreet Cafe has to be removed.
houstonfoodfinder.com
1    View on Facebook

Houston Food Finder19 hours ago
The Perfect Fish is offering Farm Raised Southern Bluefin Otoro Block from $56.84!
This portion of the bluefin belly is the fattiest and most prized part of the fish, and you can have it prepared and available for pickup or delivery if you're near the market. Check it out here: https://theperfectfish.com/products/ols/products/farm-raised-southern-bluefin-otoro-block
#otoro #sashimi #homechef #noneedtocook #houstondelivery #sushilover
1    View on Facebook