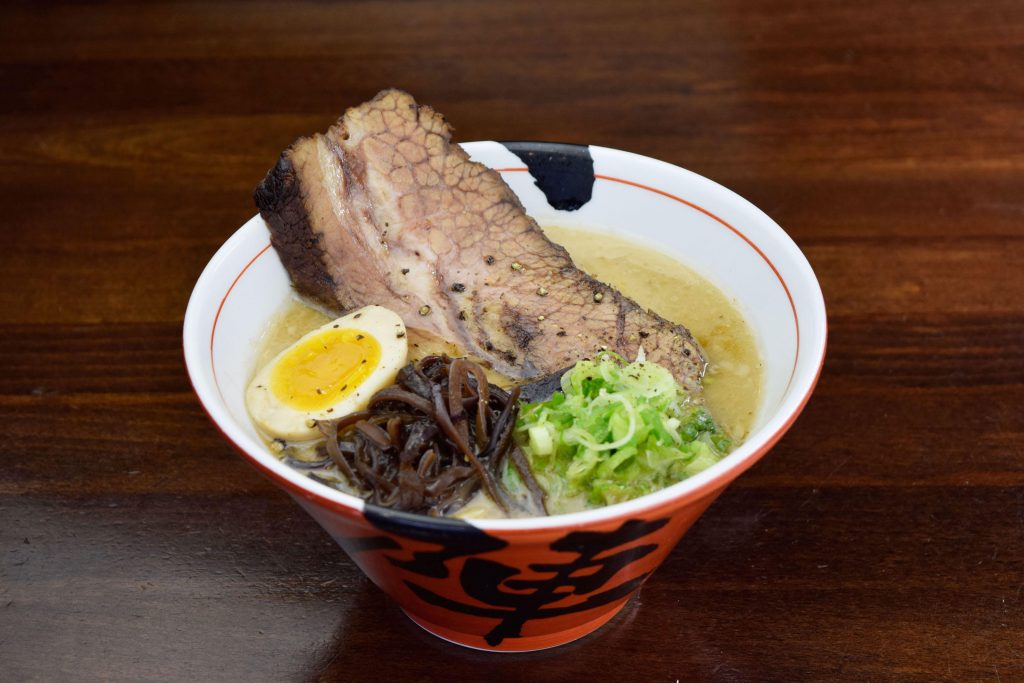 We continue our weekly series on Houston’s essential dishes with a look at the Bayou City’s best bowls of ramen. If you’ve missed any of our previous stories in the series, catch up with the links below.

As many diners know, real ramen has little resemblance to the instant, packaged ramen noodles found on grocery store shelves and in dorm rooms across the world. Yet, we owe those little packages and bowls a debt. Almost every westerner’s first exposure to ramen came in the form of those dirt cheap packets of dry noodles. If not for Momofuku Ando’s mid-century invention, traditional ramen, made with gourmet ingredients like thick pork broth, handmade noodles and pork chashu, would have never achieved the global recognition it has today.

Much like the recently explored Hawaiian poke bowl, ramen is a fairly recent addition to Houston’s dining scene. The Japanese comfort food with Chinese origins only became prevalent in the city in the past decade. In the later part of the ’00s, there were no dedicated Ramen shops in the city, and very few ramens on Japanese restaurant menus. That all changed around 2012, when Texans started wanting locally the same kinds of excellent bowls they experienced when visiting other places like Japan, New York City and Los Angeles.

In no time at all, ramen became an essential part of Houston’s culinary consciousness. Today, ramen shops abound, with each new broth-and-noodle entry sparking endless debate over which restaurant serves the best bowl.

Wading into this great debate, we’ve assembled our own list of the essential ramen shops to try in Houston. These include respected national chains, local trailblazers and new guys on the block raising the creative stakes.

Most Houston foodies trace their first real ramen experience to one place, JINYA Ramen Bar. The now-international chain was founded by second-generation restaurateur and Tokyo native Tomonori Takahashi in 2000 and is now one of the most recognized names in ramen. In 2014, Houston franchisee Jim Wang opened the first Greater Houston-area location in Webster, followed by the popular Midtown location in 2015. JINYA is the first really successful dedicated ramen chain in the city and it continues to expand. There are now five locations and two more on the way in The Heights and Sugar Land.

JINYA excels at Tokyo-style tonkotsu ramen made with creamy pork broth that’s been simmered for over ten hours. The thick noodles are aged for three days. The Japanese kitchen also serves a fantastic spicy umami miso ramen with a thick, red broth that is sure to cure what ails you. Also among the famous signature bowls is the Lobster Me Happy, featuring shrimp and lobster won tons swimming in pork broth and garnished with a head of lobster sticking right out of the bowl.

Back in 2012, hip hop DJs, chefs and good friends Tatsu Aikawa and Takuya “Tako” Matsumoto opened Austin’s first brick and mortar ramen shop called Ramen Tatsu-Ya. The super-hip restaurant quickly became one of the most buzzed-about noodle houses in Texas, with ramen fans driving in from all over the state to see what all the fuss was about. Five years later, the Tatsu-Ya team opened a much-anticipated Houston location in the heart of Montrose.

Ramen Tatsu-ya is widely recognized as one of Houston’s best ramen shops and all-around noodle houses in the city. The claim to fame is in the super-rich broth. Shipped in daily from an Austin “broth factory,” the Houston store can go through more than 50 gallons of the creamy, umami pork broth on a busy day, according to executive sous chef Kevin Kobayashi.

Beyond the broth, the folks at Tatsu-Ya have managed to stay on-trend with creations like spicy chilled ramen, a broth-less tsukemen that’s perfect for Houston’s brutal summers. That dish pales in popularity compared to 2018’s limited-time brisket ramen, made in partnership with Truth Barbecue. The Instagram-worthy bowl made the rounds of Texas food media and foodie social media feeds in a way few local dishes ever have. They followed that up with the equally viral crawfish ramen in the same month, solidifying Ramen Tatsu-Ya’s status in Houston as a trendsetter.

One of the more underrated ramen spots in the city is an obscure little noodle house in the Westchase District called Ramen Bar Ichi. This super-authentic, mom-and-pop shop opened in 2016 next to the popular Japanese Seiwa Market. A dimly-lit, modern space, Ramen Bar Ichi serves a limited menu of traditional ramen bowls that includes tonkotsu, spicy tonkotsu, vegetable ramen and tsukemen. The tonkotsu with kikurage mushroom, bamboo, pork chashu and garlic oil is the house specialty, and at only $10, it’s one of the more affordable bowls in the city.

Despite having limited web presence or media exposure, the obscure hole-in-the-wall boasts a four-and-a-half star average on Yelp with over 500 consumer reviews, an accolade not easily earned by any restaurant. It’s the kind of noodle house frequented by Japanese Houstonians and in-the-know foodies, and a ramen connoisseur’s paradise.

Another Houston original is Washington Ave’s Ninja Ramen. This combination craft cocktail bar and ramen shop is famous (or infamous, depending who you ask) for introducing Houston to the Asahikawa-style ramen of northern Japan. The city of Asahikawa is famous for its shoyu (soy sauce) ramen, which is decidedly different from the more popular miso and tonkotsu styles. Asahikawa-style shoyu ramen is made with a lighter, oilier broth compared to the thick and creamy pork broth in tonkotsu ramen. In this way, shoyu ramen is more akin to its Chinese noodle soup ancestors. The noodles in Asahikawa ramen are also thinner and wavier than other styles, similar in consistency and shape to the noodles in a package of instant ramen or Cup Noodle.

It’s a divisive choice that’s different than what many local ramen “experts” are used to, so diners tend to love it or hate it. Regardless, what’s important is that Ninja Ramen is an essential part of Houston’s ramen landscape that broadened the city’s understanding of this historic and complex soup. There’s more to ramen than tonkotsu.

Chinatown’s Tiger Den is an independent Houston restaurant that many ramen aficionados consider the best in town. Located in the heart of the ever-buzzing Dun Huang Plaza, the Japanese noodle shop is a must-try, with a daily line of customers that starts forming before the place opens at 5 p.m.

The incredible Tiger Den broth famously simmers for over 20 hours to develop its thick, umami pork goodness. The menu features tonkotsu, miso, spicy miso and tantan varieties, along with a large selection of izakaya (Japanese pub) fare. Unlike its trendier, centrally located competitors, Tiger Den charges an affordable $10 per bowl.

Somehow, despite only arriving in Texas some 10 to 15 years ago, ramen became an important part of Houston’s culinary landscape seemingly overnight. That was helped along by a large Asian population already familiar with the dish as well as by the fervor of foodies who boosted its popularity across the nation. These days, ramen can be found in more than just dedicated shops, such as omakase sushi bars, izakayas, hibachi grills and more. For those reasons, today ramen is just as much an essential Houston dish as tacos and burgers.