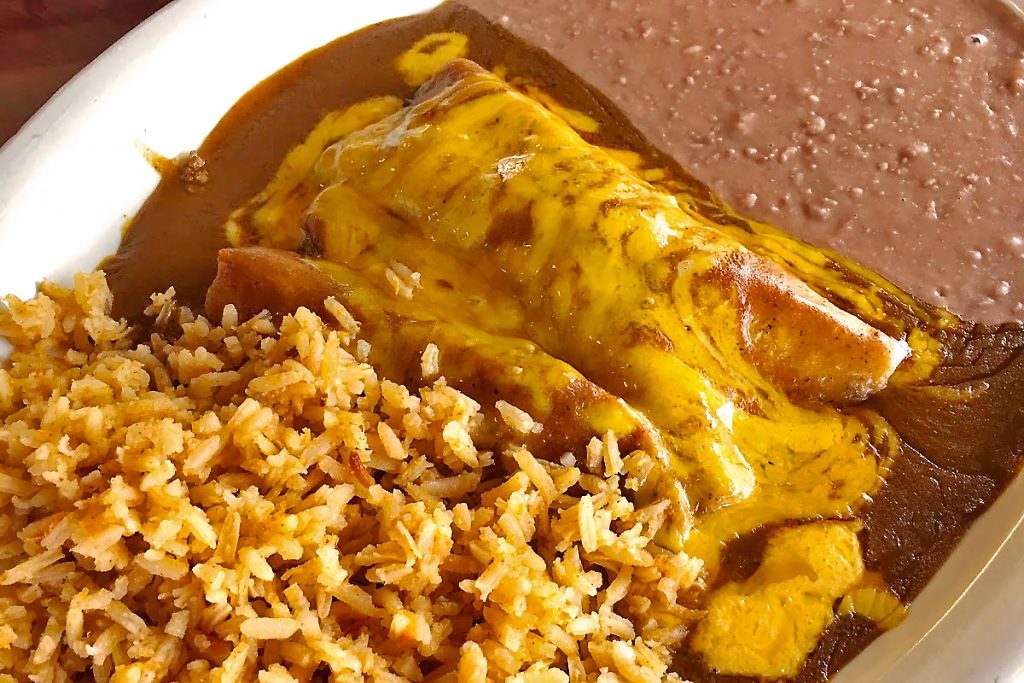 Anyone who has seen Ratatouille knows the famous scene when the movie’s namesake dish mentally transports a restaurant critic back to his childhood. Tex-Mex has the same effect on many longtime Houstonians.

Truthfully, there are a lot of things to not like about the mess that we call “the combination dinner.” There’s too much salt, grease and no vegetables to speak of amid a wealth of artery-clogging cheese and meat. If an alien was dropped into Texas and served up a big ol’ mess of Tex-Mex, he might ask, “What the heck is this on my plate?”

But for those of us who grew up here, Tex-Mex seems very right and we love it. As a kid, my family ate at an El Patio on Telephone at Park Place at least twice a week.

Traditional combo plates include frijoles refritos (refried beans), arroz a la Mexicana (Mexican rice) and “gravy” made with flour, oil and chili powder to cover the enchiladas and tamales. Tortillas for enchiladas are dipped in hot oil to soften and then stacked until ready to use. The rice is slightly red from tomatoes, seasoned with cumin and—hopefully—light and fluffy. The beans—usually made from pinto beans cooked until very soft—may be watery or slightly thick. Very lucky diners will get to enjoy a fried taco shell that’s puffy, crispy and inflated like a balloon. (Los Tios and Fiesta Loma Linda are the only places that I know of that still do these).

Updated, 7/24/2017: By reader request, here’s a map of all 12 old-school Tex-Mex restaurants recommended in this article.

Here’s a list of 12 places that, if one could time-travel back to 1960s Houston, feature the combination plates that would have been served. In our city, Tex-Mex is a hotly debated topic and everyone has a favorite. If you don’t see yours, please feel free to add suggestions in the comments section!

El Real Tex-Mex #7, 1201 Westheimer: Many of the recipes at El Real came from Robb Walsh’s The Tex-Mex Cookbook, which reflects his lifelong love affair with the history of and recipes of classic Tex-Mex. The flour and corn tortillas here are excellent. Be sure to go upstairs and check out the Jay Francis Collection of Tex-Mex memorabilia.

Casa Vieja Mexican Grill, 2836 Fulton: Casa Vieja is a newer restaurant in the old Doneraki Mexican Restaurant location on Fulton. However, the food coming out of the kitchen is classic Tex-Mex.

Los Tios Mexican Restaurant, 4840 Beechnut: Los Tios is a Houston institution and one of only two places that still make the puffy and crispy taco that was once very typical of Houston Tex-Mex. This location on Beechnut is a favorite.

Don Teo’s, 2026 West 34th: The story of Don Teo’s is pretty interesting. This location was originally a Monterey House franchised to Don Covington. Now in his 80s, he still comes by for Tex-Mex every week. The Martinez family that own it now, Don Teo and his son, Teo Jr. all worked for decades for the Monterey House chain. Junior began as a kid and worked his way through the various stations of the restaurant. He is an absolute delight to chat with, so be sure to say “hi” when you visit.

Don Carlos: 416 76th Street:Don Carlos has a long history of serving Tex-Mex in the east side of town in what is becoming known as EaDo. (I call it “Cannaviburg,” short for the neighborhood of great dining options at Canal Street, Navigation and Harrisburg.)

Fiesta Loma Linda, 2111 Telephone: This one is a favorite because of the classic, well-made, Houston-style puffy tacos served to this day. Originally a diner, the owners’ friendship with the owners of the now long-gone Loma Linda Restaurant means they follow the original Loma Linda recipes. When the check comes, diners are treated to one of the housemade Mexican-style pralines.

Lopez Mexican Restaurant, 11606 Wilcrest: This is another historically significant Tex-Mex institution that serves the Stafford area. They haven’t changed the recipe in 40 years, and don’t need to. These are classic renditions topped with chili gravy and melted yellow cheese.

Monterey House, 1109 S 11th Street, Beaumont: This is a Tex-Mex mecca for lovers of classic renditions of the cuisine. The franchisee bought the rights to the recipes of the original Monterey House chain popular in the 1960s and uses them to this day. This is a must-stop for anyone travelling east on Highway 10 through Beaumont.

Larry’s, 116 E Highway 90A, Richmond: Larry Guerrero worked for Felix Tijerina of the legendary Felix Mexican Restaurant back in the day. When Guerrero expressed interest in creating his own Mexican restaurant, Tijerina provided assistance. Ninfa Laurenzo also offered help in exchange for his buying his masa products from their family tortilleria off of Navigation. Be sure to pick up a Larry’s t-shirt when you visit. It is one of the coolest looking t-shirts in Texas.

La Hacienda, 14759 Memorial: If you grew up in the Memorial area, your family probably went to “La-Ha” at least once a week. In that area of town, it is a Tex-Mex institution.

Jay Francis is a Houston native, having grown up on the east side of town. An engineer by profession (now retired), his interest in food science and cooking began in his college years and continued throughout his adult life. With friends and family in Mexico, he considers Mexican cuisine to be the one that he is most comfortable with, but he is also knowledgeable about North African, Mediterranean and Middle Eastern Cuisine. A highpoint of his adult life was to be able to research and recipe test for three of Robb Walsh’s cookbooks: The Tex-Mex Cookbook, Legends of Texas Barbecue, and The Chili Cookbook. He has traveled extensively in Mexico for over 50 years and is available for guided tours. In addition, he teaches hands on cooking classes in his home. Jay also offers ethnic market tours of Houston. Jay moderates the Houston Chowhounds Facebook group, as well as publishes The Fried Chicken Blog and Houston Food Explorers web sites.