Eats & Greets: Pinkerton’s Barbecue Finds A Home in The Heights 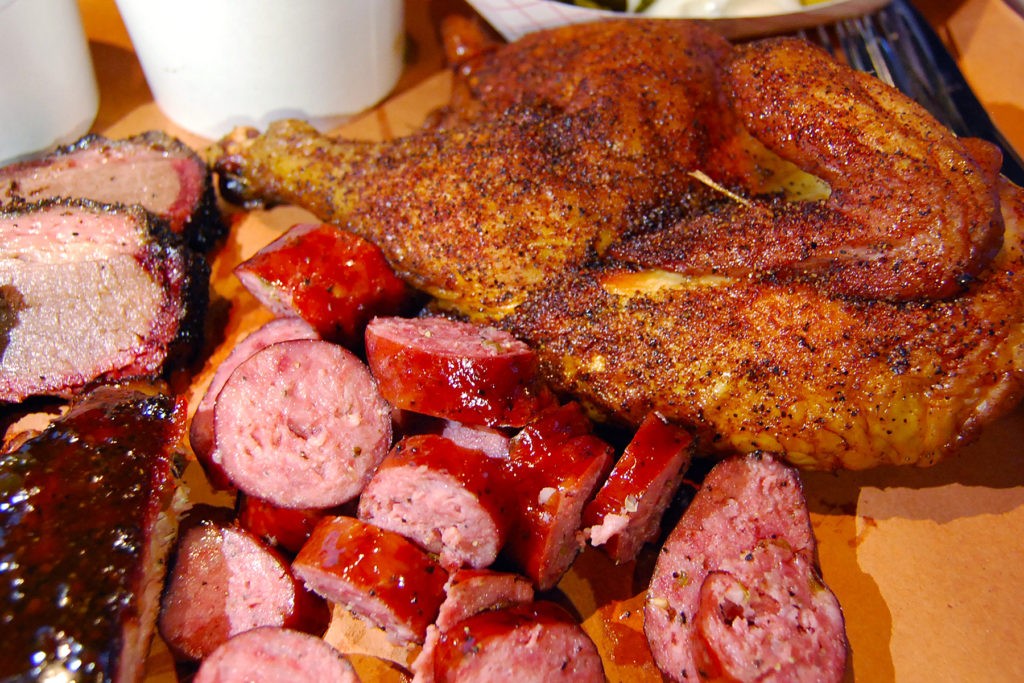 One of many trays served up on opening day at Pinkerton's BBQ. Photo by Scott Sandlin.

It’s been a little over a year since Culturemap Houston broke the news of Grant Pinkerton finding a space for his new venture, Pinkerton’s Barbecue. Renovations and the cumbersome City of Houston permitting and approval process took longer than expected but this past Saturday, Pinkerton’s was finally able to host a sneak peek of what it will offer when it officially opens on Saturday, December 10.

The quirky little gabled-roof building on Airline near North Main has seen more than its share of food concepts and cuisine types over the years, though none with any staying power. Most recently it housed Capellini Italian Cuisine, but in past lives the space has been Sweet Temptation Italian, Texas Que Smokehouse, Mark’s BBQ & Catering, Pronto Financial Services, Bambolino’s Pizza, Chispas Del Tiempo, Pollo 8 Rotisserie, and Lolita Taqueria. Hopefully, Pinkerton’s Barbecue will be the restaurant to buck the here-today-gone-tomorrow trend.

Pinkerton has transformed the space into an homage to the Texas Hill Country imagery he remembers from childhood trips to and from his family’s farm near Junction, Texas. Limestone walls in the bar area and reclaimed wood paneling throughout give the space rustic Texan charm. Framed vintage family pictures from the early 1900’s are a nice touch as well. Thick crosscuts of Live Oak tree trunks were left rough on the edges, and then sanded and polished to create striking tops for the two-tier bar and low tables. The dining room seats sixty, the bar area twenty more and there’s additional outdoor seating on the north side of the building as well.

By 2:30 p.m. during Saturday’s preview, there were about 100 people queued inside, on the front porch, and around the building. On this rainy, gray day, the line didn’t move quickly, with the wait being as much as two-and-a-half hours for some. Patrons kept their spirits up by socializing with friends and fellow barbecue fans. There were a few process issues at the meat ordering, cutting, and weighing sequence at the end of the line that slowed things down: “kinks” that will likely be addressed in the coming week.

“We were honored by the line,” Pinkerton said. “The outpouring of support for the restaurant from the community, friends, and strangers was really awesome to see. We were so happy to finally be open [that] people showing up was a bonus.”

Despite the issues, several hundred people made it through the line and emerged well-fed on traditional Texas barbecue staples such as prime grade brisket ($20 per pound), big beef plate ribs ($22 per pound), pork spareribs (glazed or dry), two types of smoked sausage, pulled pork, and smoked half chickens. The tender brisket was a hit. Well-balanced seasonings delivered flavorful bark with a touch of mesquite in the smokiness. Also available for $10 per serving was a unique Duck and Sausage Jambalaya, generously comprised of half meat and half rice. Future menu offerings will include boudin, pork belly, homemade beef sausage rings, prime beef tenderloin, lamb and cabrito (barbecued young goat).

House-made cold sides include potato salad and a simple, tangy coleslaw. Warm sides featured meaty South Texas Beans with diced poblano pepper and Jalapeño Cheese Rice, which has long been a fan favorite at past Pinkerton popups. All sides are priced at $3.50 for a “personal” size, and $6.00 for a large.

Desserts crafted from family recipes include a traditional Texas Chocolate Sheet Cake, Aunt Ruby’s Blueberry Cobbler with a crisp biscuit-style crust, and Mrs. Beth’s Banana Cake, layered with rich cream cheese frosting. Prices range from $5.00 to $6.50 per item. The banana cake turned out to be an absolute winner, and hopefully will be a lock for a permanent spot on the menu.

When regular operation begins next Saturday, Pinkerton’s Barbecue will serve both lunch and dinner Wednesday through Sunday. Two large offset custom steel smokers made by renowned local pitmaker David Klose will provide them the flexibility to run two separate cooks–one for mid-day and one for the evening service. The pits are housed in a separate screened-in porch on the back of the restaurant, with direct access to the kitchen. A unique feature of the place is a 1,000 square-foot apartment upstairs that Pinkerton is fitting out for his own use. This gives him the opportunity to be able to respond quickly to any issues in the smokehouse, which will likely have pits running 24 hours a day when they’re fully open.

There are few options in the Houston area for quality barbecue joints where diners can stop in for a quick bite and a bourbon. Pinkerton’s now makes it possible to explore which cocktail pairs best with a giant smoked beef rib. If distilled spirits aren’t your thing, both local craft beers and domestic options are available, and they’ve also put together a decent wine selection.

As with any new restaurant’s first day opening, a few stumbles were to be expected, but they were quickly eclipsed by the staff’s warmth and hospitality. Continued focus on a high level of customer service and the friendly, inviting atmosphere should ensure that Houston’s latest entry on the barbecue scene will have a long and successful run.

About The Author: A smoked meat enthusiast and occasional barbecue competition judge in the Houston area, Scott Sandlin authors the Texas Pit Quest blog and is the new barbecue columnist for Houston Food Finder.

Did you enjoy this article? Support this website and its writers by getting a “virtual subscription” to Houston Food Finder via Patreon. All contributors get a free booklet with recipes from top Houston-area chefs and bartenders!

Houston Food Finder1 hour ago
THE PERFECT 10 GALA IS BACK, BABY! This will be a can't-miss dining event of 2023!