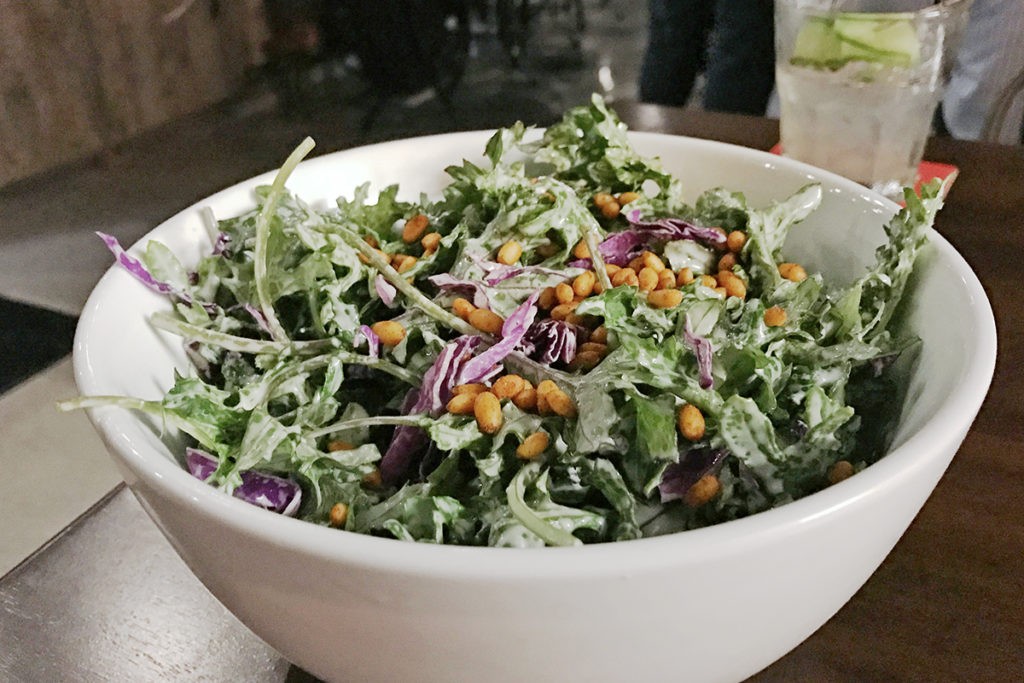 Bosscat Kitchen & Libations at 4310 Westheimer just threw open its doors to the public, but Houston Food Finder got a sneak peek a few days early at a preview event. On offer is an upscale casual menu that features a host of Southern-inspired dishes. Owner Leslie Nguyen, who grew up in Louisiana, puts a finer point on it, recognizing that Houston has more than its fair share of Southern cuisine spots. “We created a menu where the food is designed to pair really well with the whisky we have,” she says.

Therein is what Bosscat’s owners are hoping will be a hook for the Bayou City. It’s a relaxed place with great comfort food and one of the city’s largest whiskey collections. More than 260 selections are on offer, from Texas-made Yellow Rose and Balcones to rare, sought-after bottles from around the world.

The restaurant’s cocktail menu showcases the whiskey bent. The Bosscat, one of the signature libations, is a blend of Basil Hayden’s bourbon, citrus bitters and rosemary, which makes for a savory, herbal cocktail with just a bit of a kick. The House Old Fashioned employs Maker’s Mark. The 38 Special, a standout, combines Bulleit bourbon, Aperol, amaro and citrus, resulting in a balanced cocktail that packs a sucker punch of woodsy orange. Bar director Matt Sharp plans to rotate the cocktail list seasonally.

Chef Peter Petro’s Bosscat Burger is mammoth, with beef from 44 Farms that’s ground in-house, and slabs of bacon and cheese. The burger arrives with red onion, tomato and fresh lettuce on a huge wheat bun and the accompanying mayo is laced with garlic and pepper.

The roasted tomato bisque might be on the Soups and Salad section of the menu, but it’s a meal unto itself. It’s not the thick, overly creamy concoction you might find elsewhere. It’s thinner, which allows the heirloom tomatoes to be the star of the show, with the barest hints of cream for a velvety texture. Served with a grilled cheese sandwich, it’s easily sharable, but not all diners will be willing to part with it.
The 12-Hour Beef Short Ribs fairly fall off the bone and the side of potato gratin is rich and delightfully cheesy. Non-meat eaters will dig the baby kale salad with berries and pine nuts, topped with—what else, given Bosscat’s commitment to whiskey?—Japanese whisky dressing.

The laid-back vibe extends to the shabby industrial chic décor. Jelly jars with flowers are on lace-trimmed tables. A sliding barn door on wrought iron casters separates the whisky room from the main dining and bar area. The place is all sparklingly new wood and iron and exposed brick. Much of the décor was created by Nguyen, who sourced cigar boxes from nearby neighbor Casa de Montecristo by Serious Cigars, to use as everything from shelves to hold whisky bottles to the holders for paper towels in the restrooms.

The original Bosscat Kitchen in Santa Ana, California offers Sunday brunch, Whisky Wednesdays with pairings and drink-to-learn sessions. Those offerings should show up at the new Houston location soon.

Nguyen and co-owners John Reed have created a place that should hit a sweet spot for Houston diners and drinkers. Adjacent to the River Oaks District, Bosscat feels like the kind of place where everyone belongs, so long as they’re looking for a good time, good food and great whiskey. For all its commitment to well-crafted food and drink, there’s nothing pretentious about it. If you just want to hang out at the bar and drink a beer, it’s not a big deal.