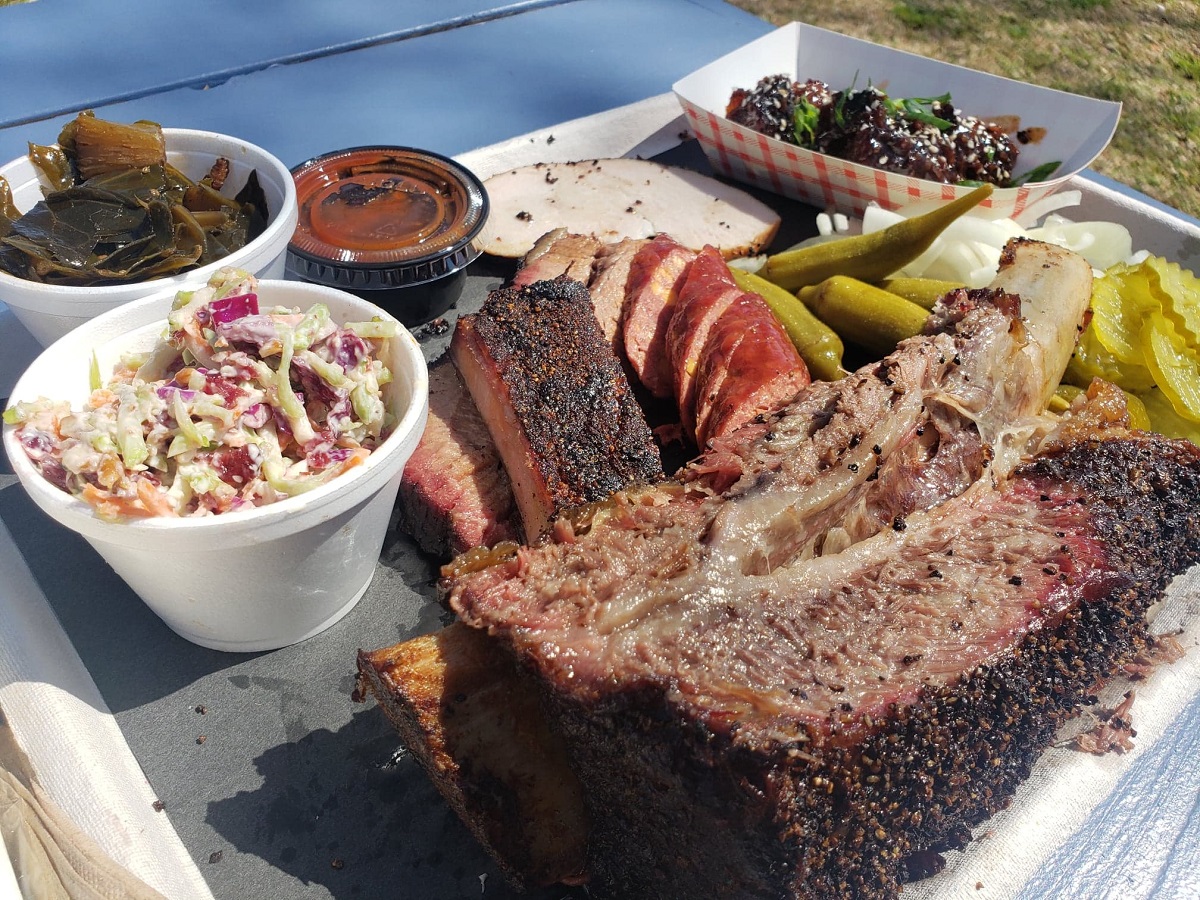 A combination barbecue restaurant, general store, deli and meat processor, Dozier’s BBQ at 8222 Farm to Market 359 has been part of the Fulshear landscape since 1957. The bacon alone is so exceptional that the 41st President, George H.W Bush had it shipped to the White House. Even longtime well-regarded mainstays can’t stay static, though. To that end, Dozier’s has added not only a 140-seat patio, but a new, respected pitmaster, too.

Houston Food Finder was invited to the patio’s grand opening, and the full-on barbecue feast to celebrate was a collaboration between Dozier’s recently added pitmaster, Jim Buchanan, and his former mentor, Wesley Jurana of Pappa Charlies BBQ, which is stationed these days at Cypress Trail Hideout, located at 25610 Hempstead in Cypress. Buchanan earned quite a following during his time with his own barbecue business, Buck’s Barbecue, which started at Lucky’s Lodge before eventual relocating to Galveston, where it sadly ended up closing.

It was only fairly recently that Buchanan took the role of pitmaster at Dozier’s, and he said that his goal was not to make trendy or outrageous barbecue. Instead, he says he closely follows Ed Dozier’s original recipes, only updating the methods and making the food as good as humanly possible. That methodology is most evident in the gargantuan beef rib. The front and center of the plate was exceptionally seasoned and so juicy that it could literally be wrung out.

In contrast to the loose, fall-off- the- bone texture of the “dino rib,” the pork ribs — a regular menu item — fulfilled the needs of those who crave a little more chew. With the smaller size, pork ribs get more contact with the seasoning and, after smoking, develop a wonderfully sharp crust that packs a wallop of flavor.

Dozier’s has long been known for its sausages and the Cheddar Link lived up to the legacy. The sausage grinds were consistent, tightly packed into the casings and seasoned with both mild spices and generous hunks of cheese.

Other Texas barbecue standards that guests can enjoy at Dozier’s include smoked brisket and turkey, neither of which disappointed. Brisket is often considered the pride of Texas barbecue, and Dozier’s rendition is downright picturesque, with a deep smoke ring that surrounds the fork-tender beef. Turkey can be a point of failure for barbecue shops, often coming out dry and chalky, but at Dozier’s it visibly glistened and carried the full smoke flavor from the pit.

Another thing that made the cooking at Dozier’s stand out was how much was care was put into the sides. Often, barbecue shops treat side dishes as filler, but the Cranberry Coleslaw ended up being a star on its own. The dish was crisp, light and vibrant, lacking any of the heaviness of many renditions which are usually loaded down with binders, such as mayonnaise.

Dozier’s has evolved into a full-scale restaurant, but for decades has functioned as a general store and deer processor. Customers can get most of the basic needs and condiments, as well as plenty of Texas-made goods, including pickles and hot sauces.

The shop also sells housemade sauces, rubs, salsas and sausages, along with that aforementioned bacon beloved even by President George H.W. Bush’s. There is a full meat counter selling Texas’ famed 44 Farms brand and various deli items. Shoppers can also find a variety of beers and wines, including a handful of Texas labels.

Even with the well-rounded selection of grocery items, Jim Buchanan and shop owners, Jim Cummins and Steve Bauer, implied that there is more growth to come. Soon, Dozier’s will be the first store to carry Flores Tortillas, which are made with beef tallow.

The newly unveiled 140-seat patio offers dozens of well-spaced picnic tables. There’s a small stage for events, and over time, Dozier’s intends to outfit the area with fun games, such as giant checkerboards and cornhole.

One thing about the entire Dozier’s experience is the sheer enthusiasm. Both owners and the pitmaster were welcoming to everyone that they spoke to — despite a very long line of barbecue enthusiasts — and excited for all the new developments.

The hours of operation for Dozier’s BBQ are Tuesday through Sunday from 11 a.m. to 7 p.m. Dozier’s is closed on Monday. Be sure to check out the menu for the variety of barbecue options available.

As of the moment, Dozier’s has not made a decision on mask, occupancy and social distancing policies. Check back for updates.