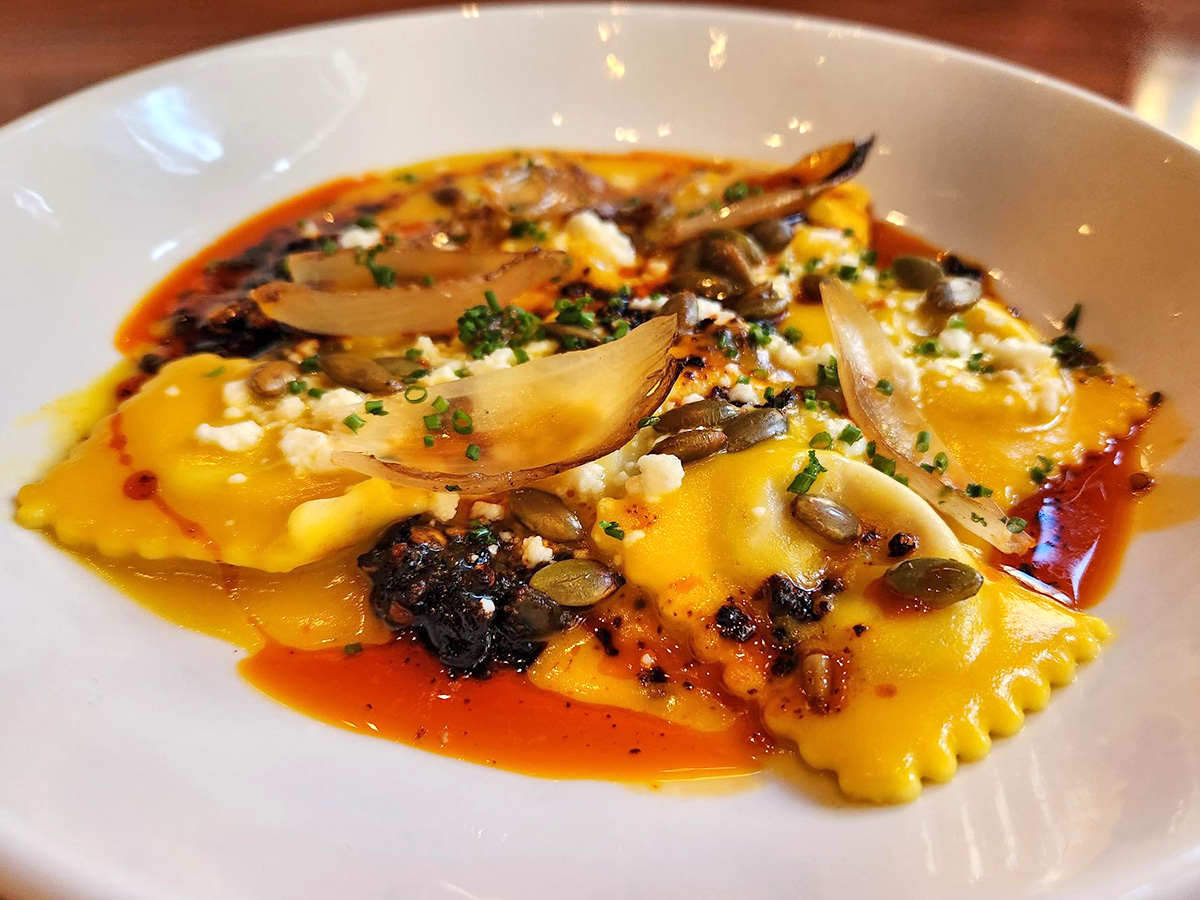 Butternut squash ravioli, a starter on the fall menu at Guard and Grace. Photo by Minh Truong.

There is no shortage of steakhouses in Houston, and many of them are located downtown. So, when “modern steakhouse” Guard and Grace — named after chef and owner Troy Guard’s daughter — opened in late 2019 on the ground floor of One Allen Center at ​​500 Dallas, it wasn’t clear what was going to make it stand out from all the others.

The first distinction is the restaurant itself, a sprawling, two-story building encompassing floor-to-ceiling windows, an open kitchen and an eye-catching installation of over 5,000 bronze rods hanging above the main dining area.

Secondly, there’s Guard himself. He grew up in Hawaii and spent several years cooking in Asia before opening several restaurants across the country, including the first Guard and Grace in Denver (where Matthew Young, an up-and-coming chef making his own mark in Houston, honed his skills). Guard combines those experiences with his love for fresh, seasonal ingredients to create a menu that is anything but standard steakhouse fare.

That said, Guard and Grace’s classic steakhouse favorites, which stay on the menu, are also creative and appealing. Starter choices include warm spinach and artichoke dip made with goat cheese, crispy prosciutto and cherry peppers served with house made chips; Oak-Fired Octopus with white bean and celery salad, spanish chorizo, sherry vinaigrette and red pepper coulis; and hamachi sashimi with yuzu truffle soy, serrano, cilantro and a playful sprinkle of Pop Rocks. For entrées, regular options include a strip or a ribeye (this is a steakhouse, after all) as well as Alaskan black cod served with charred broccolini, sweet soy butter and sesame seeds.

The other side of Guard and Grace’s menu is its limited-time seasonal dishes. Right now, it’s autumn, so the focus is on ingredients that flourish during this season. Houston Food Finder was recently invited to a tasting of the current season’s offerings.

First up was butternut squash ravioli with salsa macha (a Mexican-style chili oil made with dried chilies, nuts, seeds, and olive oil), pickled pearl onion, pepita and queso fresco. This dish was such a surprise! Individually, these are some of my favorite ingredients. I wouldn’t think to put them in one dish, but it works. The smoky salsa macha plays off the sweetness of the squash, while the queso fresco and pickled onions adds a hint of sourness and acidity to the dish. This was autumn on a plate.

For the fall, Guard and his team have also added three seafood entrées, including oven-roasted salmon with charred cabbage, crispy potato and smoked tomato butter. This is a dish you’d want on a cold day (cabbage and potatoes are ideal for a drop in temperature). It was both hearty and light.

The second new entrée is an homage to the Gulf Coast: Texas roasted redfish on the half shell with Pontchartrain sauce and cremini mushrooms, and topped with Gulf lump crab and shrimp, and, yes, popcorn. Pontchartrain is a creamy butter sauce built from roux, so it can be heavy, but Guard’s was lighter, finishing more buttery than creamy. While the popcorn was a playful touch, it neither added interest to the dish, nor took away from it.

My favorite new addition was the pan-seared Gulf snapper with miso-tamarind leeks, baby bok choy and cashew butter. I have often lamented that leeks are underutilized and are unfairly compared to the green onion. Leeks are milder and sweeter, with just a hint of earthiness. They pick up other flavors well, and pairing them with the Asian ingredients and baby bok choy in this dish was perfect. The cashew butter added nutty richness that combined well with the meatiness of the red snapper. This dish alone is worth a trip.

Here’s a pro tip, leave room for the bite-sized triple-chocolate chip cookies. These are warm, gooey and sprinkled with a touch of sea salt that balances the sweetness. While dessert may be the last thing on your mind after a full meal, these cookies really aren’t optional.

At its heart, Guard and Grace is a great steakhouse. However, with a menu that constantly evolves and the ability to properly showcase seasonal ingredients, it has much more to offer.