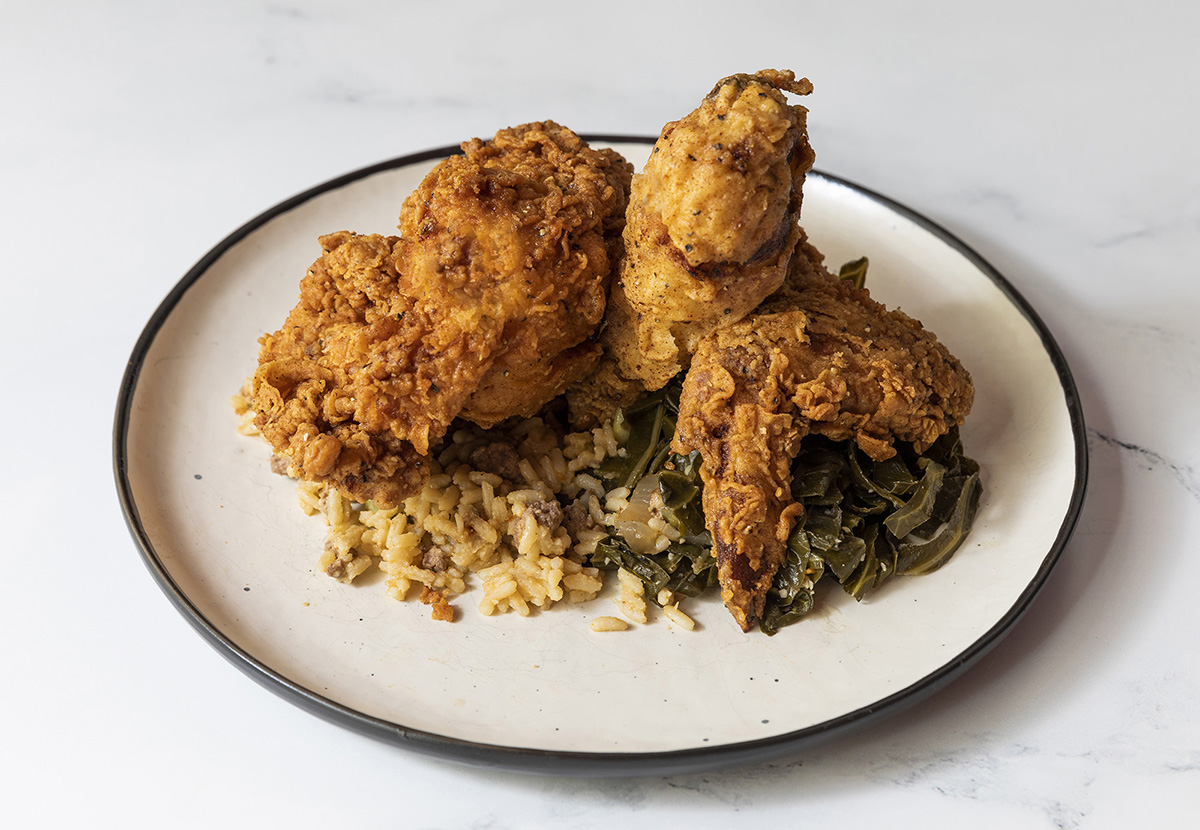 Chef Shannon and Stacey Tune are not only bringing Craft Burger back to Finn Hall, but also opening a new chicken concept. Photo by Julie Soefer.

Finn Hall, located in the historic Jones on Main building at 712 Main in downtown Houston, is expanding its food and drink options. A popular chef and his wife are not only returning with their original concept, but bringing a new one, too. Two brand-new companies are offering their food and drink as well. These join existing Finn Hall businesses Greenway Coffee (the second location of the popular local coffee roaster), Papalo Taqueria, casual Korean joint Yong, Pizza Zquare and cocktail bar Swallow’s Nest.

Chef Shannen and Stacey Tune are bringing Craft Burger back to Finn Hall after an approximate two-year absence. Originally founded as a food truck, Craft Burger was one of the original food stands when the Finn Hall first opened in December 2018.  Additionally, the Tunes are debuting Pecking Order, a chicken restaurant. Rounding out the new entries are Maui Bento Box from Henry Hamor and Sanae Belallam, and Cranky Carrot Juice Co. by Francesca Costa and Fredy Escobar.

As was the case with many downtown businesses, when the pandemic hit and office workers started working from home, it impacted Craft Burger at Finn Hall. The Tunes opened it as a brick-and-mortar restaurant in Katy in December 2020 — and Shannen’s reputation as a champion of Food Network’s “Chopped” surely helped get it off to a good start.

“Downtown business was on a steady decline and we thought it best to go out to the suburbs,” said Shannen. “We live near the Katy location and felt the community would support — and they did.” With many workers back in downtown offices, Craft Burger will hopefully now have a steady stream of customers. It’s open from 11 a.m. to 3 p.m. Monday through Friday.

As hinted by the name, the new concept Maui Bento Box creates bentos (Japanese lunch boxes), but with a twist. These include a mix of Hawaiian dishes rather than strictly Japanese fare. (To be sure, Hawaii’s food culture is strongly influenced by Japan.) Some of the bentos include one with ahi poke, Maui pickled vegetables and white jasmine rice, and another anchored by loco moco (ground beef patty topped with a fried egg and sauce), rice, macaroni salad and stir-fried vegetables. Maui Bento Box is open Monday through Friday from 11 a.m. to 3 p.m.

Cranky Carrot Juice Co., which started in a commercial kitchen space, hasn’t opened at Finn Hall quite yet, but it will in September and offers more than just what’s in the name. There’s an assortment of cold-pressed fruit and vegetables juices, shots, smoothies, nut milks and cold brew lattes. For something a little more solid, Cranky Carrot also serves topped toasts and bowls.

“Finn Hall is the ultimate food lovers destination offering a unique selection of diverse cuisines including Mexican, Korean and Italian, among others,” said Miranda Cartwright, general manager of property operations at real estate investment and development firm Midway. “We are thrilled to welcome these one-of-a-kind culinary concepts that will enhance the flavors of Finn Hall’s dining experience.”

While the individual eateries may have different hours, (as noted above) starting in September, Finn Hall’s overall hours are Monday through Friday from 7:30 a.m. to 9 p.m. and Saturday from 8 a.m. to 9 p.m. Seating options include outdoors, at the bar or at a recently constructed outdoor patio. More information is available at the website.