Dine, Lodge & Fish at Pier 6 in San Leon For a Staycation Near Houston 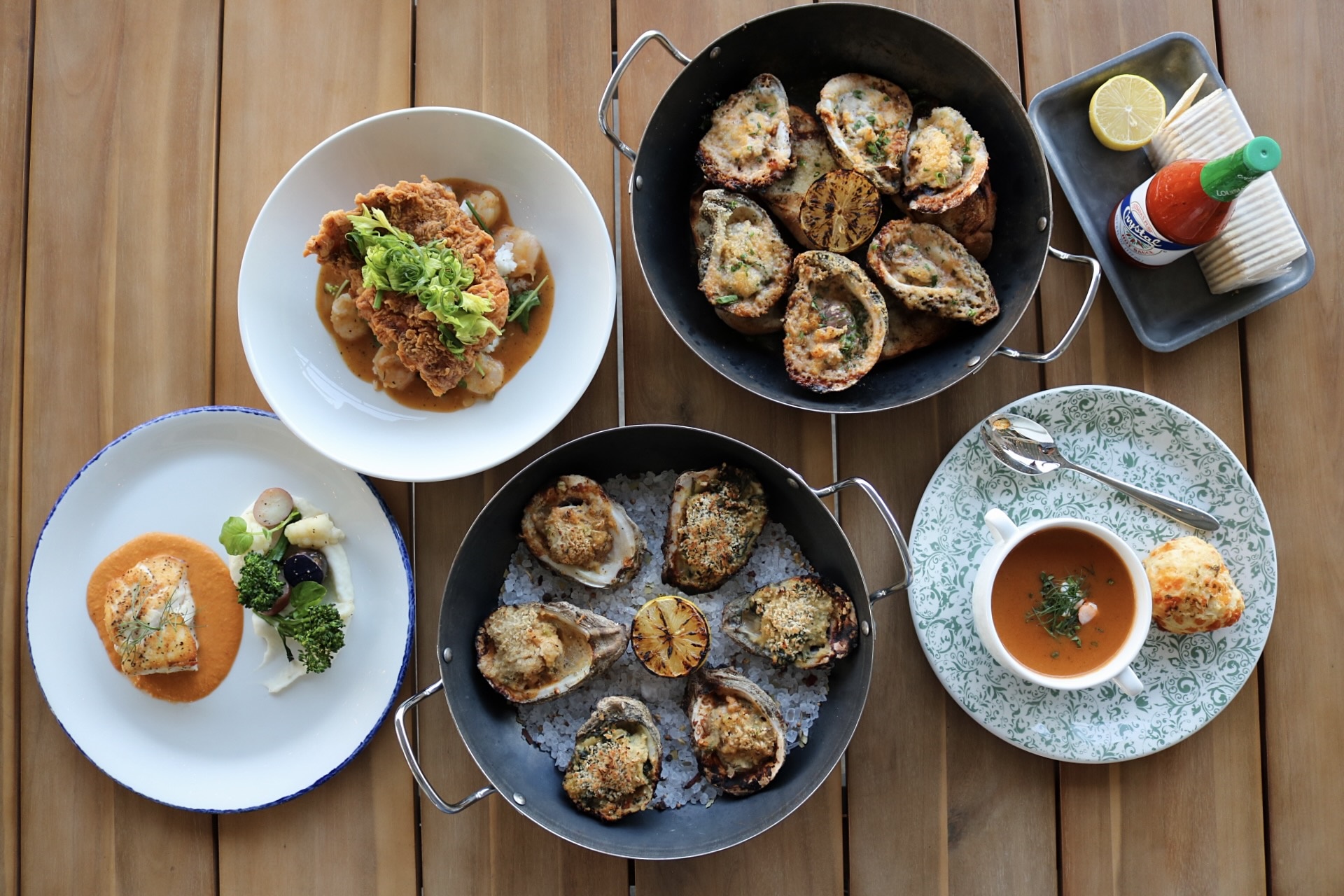 San Leon is something of a well-kept secret to most Houstonians. Tucked away just north of Galveston island, this small, horn-shaped peninsula jets into the bay just out of sight of the surrounding bustling metropolis and small industrial towns. Here, in the shellfishing town that once served as a stronghold for the pirate Jean Lafitte, second-generation oyster purveyor Raz Halili recently launched Pier 6 Seafood & Oyster House, a waterfront seafood concept at 113 6th Street.

The already-popular bayside eatery boasts 5,000 square feet of mixed indoor and outdoor dining, all draped in stylish, clean-lined decor that feels almost out of place. The flowing natural light around the sprawling bar, ample use of indoor greenery and massive open windows would seem more at home on South Beach than on the banks of the Houston Ship Channel.

Just a few blocks down the road, Halili and company have also launched The Bungalows at Pier 6, a set of beautifully designed waterfront condos with gorgeous bay views and private fishing piers. Guests of the eatery can now spend an entire weekend in San Leon relaxing, fishing, dining and watching the sunset over their own private slice of Galveston Bay.

Houston Food Finder was recently invited for a staycation experience that had all the makings of a Gulf Coast getaway. The peninsula itself, not more than an hour away from most parts of Houston, is a quiet community of residential streets, fishing businesses and the odd restaurant or pub. Pulling up to Pier 6, an indoor-outdoor structure with a repurposed warehouse vibe, you may see the occasional Ferrari or classic muscle car parked out front. These are additional reminders of the juxtaposition this dining oasis presents in its humble settings.

The “oyster” in Pier 6 Seafood and Oyster House is no naming gimmick. Halili’s family’s business, Prestige Oysters, is also based in San Leon and has a long a history of providing Gulf oysters to the Houston and Galveston seafood industry. The young purveyor’s entry into restaurant ownership is anchored by the briny Gulf treasures that he and his family have farmed for decades.

Executive chef Joe Cervantez (formerly of Brennan’s of Houston and Killen’s Steakhouse) serves up freshly caught oysters in a variety of hot and cold preparations. The Prestige is a savory house special of grilled oysters topped with grated Parmigiano Reggiano and herb shallot butter, and the decadent, crave-worthy Blue Crab Oysters are grilled and stuffed with a crab gratin. Our favorite was the classic raw on a half shell, a simple yet timeless test of a seafood kitchen’s fare. Unsurprisingly, Pier 6 aces this test, thanks to its proximity to nearby oyster reefs and direct access to its proprietor’s own supply chain.

For heartier fare, Cervantez and his team have designed lunch and dinner menus that aim to raise the dining bar in San Leon, while at the same time keeping things traditional. There are Gulf Coast classics such as redfish on a half shell and a mouthwatering Crispy Red Snapper served over shrimp étouffée, along with the more casual and shareable house special Tide to Fried. The latter is a platter of fried seafood that includes Potato-Crusted Snapper, crispy Gulf shrimp and cornmeal fried oysters. While the menu may look like it lacks the worldly diversity of fine dining seafood establishments in metropolitan areas, simplicity is key to Pier 6’s tide-to-table approach. There’s a joy in looking out over the water your meal was recently caught in; an ecosystem of local fishermen and purveyors all contributing to each dish.

A few minutes down the road, the bungalows are a newly renovated block of waterfront condos, all beautifully styled with wide-open views, private decks and access to the building’s two private piers. Nightly rates start at $275 and each bungalow comes equipped with a fishing rod and tackle for pier fishing any time of day. In the evening, the building’s unobstructed views are painted orange and red as the sun sets over Galveston Bay.

It seems like no expense was spared regarding design and creature comforts. Each luxury condo features an espresso machine, modern coastal decor, dual-head showers, a furnished patio deck and massive flat screen TV’s in both the living and bedrooms. Lights and fans are controlled by remote, and entry is easy and secure with keypad locks. Like the similarly named restaurant concept, The Bungalows at Pier 6 offer a more refined getaway than one might expect on this sleepy bayside peninsula.

Beyond dining at Pier 6, the bungalows offer proximity to other area attractions, both famous and obscure. Naturally, San Leon is close to both Galveston Island and the Kemah Boardwalk, as well as Space Center Houston. However, the small town is also home to Texas’ first rum distillery — Railean Distillery — which is just a short bike ride or drive from the condos.

It’s a strange feeling, waking up to gorgeous bay views and the sound of seagulls, stepping onto a pier with your morning coffee and taking in the ocean breeze, all less than a 45-minute drive from home. A one-night stay in the Pier 6 bungalows is enough to inspire a second, a third, or, should you have the means, perhaps a bayside condo of your own.

The ease of access this staycation experience offers is matched only by the pleasant surprises it affords along the way. For more information or to book your stay, visit the The Bungalows at Pier 6 website.