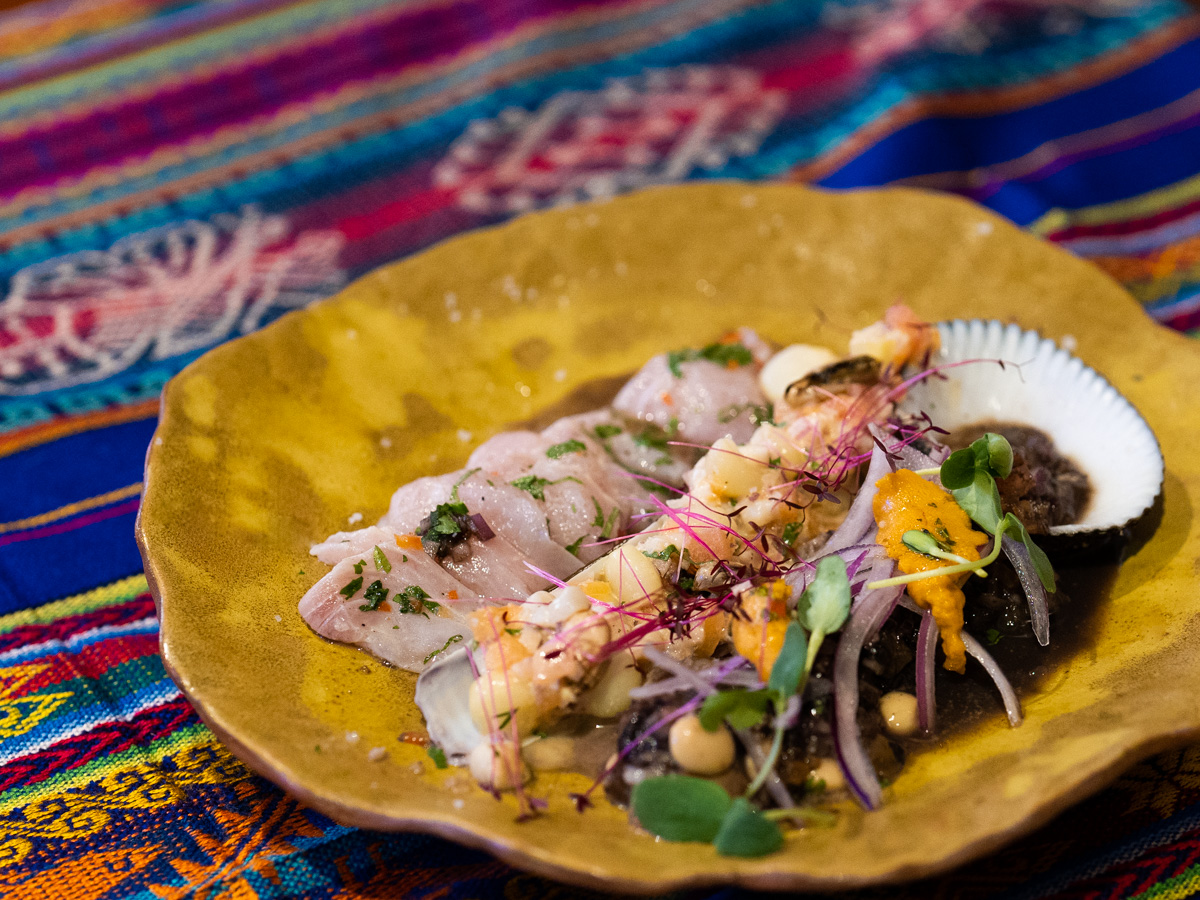 Chef David Guerrero is no stranger to adversity. He has survived two bouts with cancer and faced the closures of previous establishments. Now, he’s resurrected Andes Cafe in POST Market at 401 Franklin. In a nook just three spaces down from the buzzy Golfstrømmen, Guerrero is creating a seafood haven that is bringing the vibrant taste of South America to Houston, one plate of ceviche at a time.

While Andes Cafe has hot food on the menu, Guerrero wants to highlight his eight-seat ceviche bar and he invited us to try its offerings. The space has plenty of touches from his native Ecuador, from folk dolls lining the countertop to serving plates handmade by artists in Ecuador. We started with conchas asadas, grilled Ecuadorian black clams served with a zesty chalaquita (a Peruvian relish) and a basket of fried plantains on the side. The clams were plump and juicy, with a pleasant salinity offset by the chalaquita and a bit of lime. This was my first time trying these black clams from the swamps of Ecuador. They are now a new favorite.

We were also served the wonderfully tender octopus parrillero, a dish that takes three days to prepare. Charred, marinated octopus are served with aguachile negro, roasted leche de tigre marinade, botija olive purée, cucumber and pickled carrots. The perfectly charred octopus was tender without being mushy. It paired beautifully with the violet-colored botija olive purée, which was intensely fruity and fragrant, but quickly unveils the snappy spiciness from the leche de tigre. The pickled carrots added an element of subtle sweetness and acidity, and there were also clever slices of charred avocado on top, which mimic the look of the cucumbers. It’s a playful dish that is sure to please anyone who’s a fan of pulpo.

We were also treated to causitas acevichada, a fun play-with-your-food dish. Balls of mashed Peruvian potatoes are topped with smashed avocado and slices of fresh striped bass that are crowned with golden-fried calamari. Served with a smoky acevichada sauce, the plate is a fun mix of a fried element and savory sauce on a backdrop of mashed potato. The fish slices brought a pleasant contrast in temperature and texture to the ensemble, making for a well-balanced starter.

The ceviche clásico is a great introduction to Peruvian ceviche. Slices of mahi mahi are served in a leche de tigre made with aji amarillo chiles, sliced red onions, cilantro, choclo (large kernels of soft Peruvian corn), cancha (dry-roasted, crunchy corn kernels) and sweet potato. The leche de tigre was surprisingly gentle, allowing the quality of the fish to shine. The red onion provided sharpness, while the choclo and the cancha added texture to the classic dish, which serves as a great introduction to the ceviche menu.

If the ceviche clasico serves as an introduction, the ceviche mixto is a more comprehensive experience, showcasing a variety of seafood ingredients that Guerrero proudly told us are always sourced fresh. Featuring striped bass, fried Spanish octopus, Ecuadorian shrimp, and fried calamari, the ceviche mixto is served in a leche de tigre made with fiery rocoto pepper, which brings more heat than the aji amarillo found in the ceviche clasico. The fried octopus pieces were superbly tender with just the right amount of breading. The shrimp was plump, and fronds of Peruvian seaweed were scattered throughout to add a bouncy textural element. The striped bass slices were fresh and supple, and the breading on the fried calamari rings was light but still perfectly crunchy. There’s plenty of heat in the leche de tigre, but never to a point where it becomes overwhelming, and sweet potato helped extinguish the heat between bites.

The ceviche embrujado, also known as “haunted” ceviche, was the standout — a show-stopping plate with slices of mahi mahi, razor clams paired with choclo and cancha, and Ecuadorian black clams in a ceviche with lupini beans (also called chocho) topped with uni. It’s a visually striking plate with flourishes of brilliant pink threads of amaranth. The mahi-mahi slices were tender, with flecks of salt added to give a slight crunch with flavor. The razor clams are chopped and served beautifully in the shell, providing a vessel to make it easy to scoop out the buttery-soft clam meat. The addition of choclo and cancha added heft to the silky razor clam, with bright flavors coming from onions, tomatoes and aji limo pepper that are mixed with a sweet and spicy Japanese mayo sauce. The black clam ceviche featured the same clams from the conchas asadas, but served chopped in a mild panther’s milk marinade, a simultaneously tart and briny sauce that blended well with the clam’s natural flavors.

The chocho beans, a high-protein South American bean, were new to me. I joked that they should be fed to bodybuilders, to which Guerrero told me they actually are made into protein powder. The beans had a firm and snappy texture that I loved, similar to soybean. The uni on top further contributed to the briny quality of the clam with a slight sweetness. If you only have time and stomach space to try two dishes at the ceviche bar, the mixto and the embrujado showcase seafood and flavors that aren’t commonly found elsewhere.

We ended our journey through the ceviche bar menu with the tiradito nikkei, which highlights razor-thin slices of hamachi in a yuzu leche de tigre that are served with crispy striped bass skins. A sprinkling of fried organic quinoa mimics the appearance of fish roe. Meant to be eaten like nachos, slices of hamachi go on top of the fried skins along with a drizzle of the tangy yuzu leche de tigre. The bass skins make an audible crunch that contrasts with the thin, soft hamachi. The leche de tigre is bright and citrusy, while the skins lend needed and complementary salt to the flavor profile. If there’s one thing that Andes Cafe excels at, it’s balance, and this dish offers the textures and flavors that make it delight to eat with your hands.

The ceviche bar is currently reservation only. Guerrero’s dream is to have enough people discover the delights of what he’s serving that there’s a six-month waiting list for a seat. Thankfully, for now, you won’t have to wait that long to enjoy this remarkable ceviche bar. Better show up soon before the secret’s out.