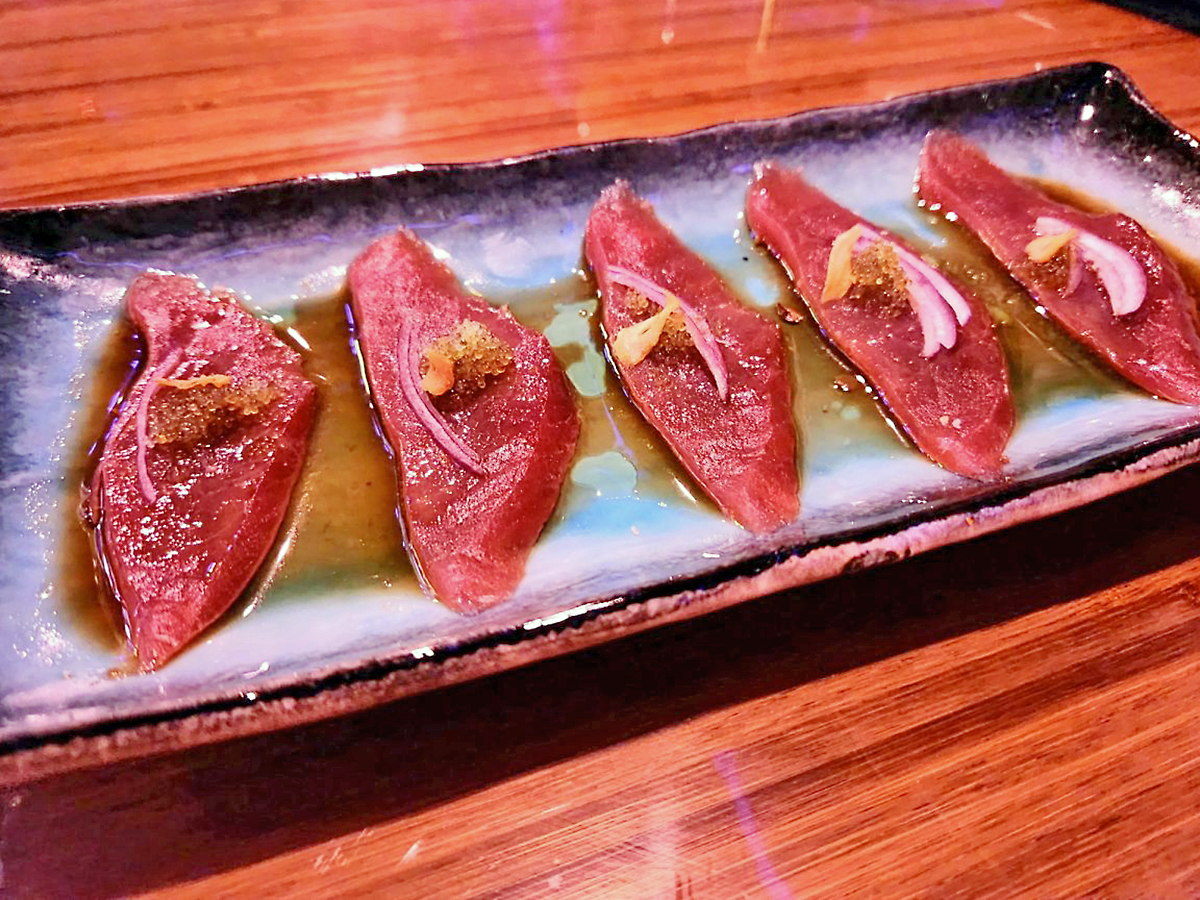 TEN Sushi + Cocktail Bar, the new River Oaks restaurant by Daily Dose Hospitality, the team behind Bosscat Kitchen & Libations, opened in November. It’s located at 4200 Westheimer on the ground floor of the 200 Park Place building. Daily Dose Hospitality acquired TEN’s first location in California in 2014 and owners John Reed and Leslie Nguyen wanted to open one in Houston. In a press release, TEN is described as offering modern Asian flavors in an Asian-inspired setting, so, if you’re looking for traditional Japanese sushi, this isn’t where you’ll find it.

Admittedly, I did have preconceived notions. Everything I heard about TEN was more about the ambiance and the décor rather than about the food, but in a time where the “camera eats first” and a restaurant being Instagrammable can be the main draw, it seems almost par for the course. Having seen pictures of its interior, walking in for dinner I expected pink — a lot of it — and pink is what I got, along with purple. The décor included a cherry blossom tree, lanterns, water lilies and Japanese artwork. All of this is crammed into the 2,800-square-foot space, leaving it all feeling contrived. To me, it sat in a middle ground; not over-the-top enough to be a spectacle, and too much to simply be a beautiful, tasteful space.

I particularly did not care for the lighting fixture in the bathroom hallway, which reads, “love you long time”. This phrase may not be much more than a line from a movie or the hook of a rap song to some, but to Asian women it is rooted in racism and misogyny. It makes light of a dark time in history where women were forced into unthinkable situations just to survive. This phrase has nothing to do with the food, and is disappointing to see. It left me wondering what it was they were going for, because it was neither provocative nor tongue-in-cheek, but rather completely unnecessary.

Setting all this aside, I hoped the food would at least be worth the trip. It is a considerable menu consisting of starters, entrées, sushi, sashimi and rolls. The starters and entrées are made up of fusion and pan-Asian offerings such as Crispy Rice Sushi and Firecracker Wontons, Shaken Beef Filet, kung pao shrimp and Pad Thai.

The hamachi crudo appetizer was not available that night (an issue we ran into repeatedly), so we opted for a couple of dishes from the specialty sashimi section: Halibut Sea Salt ($20) dressed with lemon yuzu kosho, ponzu, truffle oil and pink peppercorns and yellowfin tuna ($18) with truffle oil, garlic chips, red onions and tobiko. Both the dishes were quite good; each element worked well together. Oftentimes, truffle oil can be overpowering, but in these dishes, the fish was not overly dressed with any one ingredient.

I tend to skip rolls when I go for sushi, but TEN touts its specialty rolls made with black rice, so we had to see what it was all about. Black rice gets its color from anthocyanins found in the grain’s outermost layer. Rolls on the menu that feature the black rice include the Black & Yellow ($20) with yellowtail, spicy tuna, cucumber, avocado, rice pearls and sautéed sweet pepper with vegan chipotle sauce, and the Black Dragon ($19)with baked eel, tobiko, crab mix, avocado, spicy aioli, green onion and sriracha. We ordered the Forbidden Roll ($20) with seared ahi, albacore, crab, spicy tuna and avocado dressed in sweet soy and with jalapeño sauce on the side. The black rice does offer a slightly different texture and nuttier flavor than white sushi rice, but aside from the color of the roll, there was nothing exciting about it. The streak of jalapeño sauce seemed out of place, as it didn’t add much in terms of flavor or heat.

We also ordered some nigiri (TEN was out of the albacore belly we wanted, and we were given uni instead of unagi – a mistake our server graciously corrected by bringing us the unagi and letting us keep the uni.) The cuts of fish were generous without being too thick.

For an entrée, we went with the Coconut Curry Salmon ($27), roasted salmon with gai lan (Chinese broccoli), sweet potato and coconut curry broth. The salmon was cooked to a perfect, flaky, medium rare and the skin was crispy and flavorful. What left us scratching our heads was the lack of any coconut or curry flavors — or broth for that matter. Had they forgotten it? But then, we noticed a very thin layer of white sauce under the bed of gai lan. Had it been advertised as just roasted salmon, it would have been a great dish, but what we imagined based on the description was a warm bowl of curry that we could spoon over rice to enjoy on a cold evening.

The dessert menu is small, featuring mochi, chocolate ganache cake and Miso Cheesecake. We went instead with Coffee Panna Cotta ($12). The Vietnamese coffee flavor was prominent and crumbled cookies adding crunch to the custard-like texture.

The cocktail menu has a dozen offerings with Asian flavors and playful names such as Yuz it or Lose it ($15) with Ketel One Vodka, yuzu, citrus, egg white and honey. The Shiso Gin to You ($15) with Sipsmith Gin, citrus, Sichuan bitters and a shiso leaf had a pleasant herbal taste and was refreshing. The Gringo Ringo ($15), with Altos Reposado, apple, gingersnap infusion and citrus, was not a hit. The flavors did not work well together and left a bitter aftertaste.

If I had to describe my visit in one word, it would be “underwhelming.” The food was fine; some dishes were even very good. However, in a city where there are so many options for sushi and other kinds of Asian food, it left me thinking that “less is more” when it comes to providing good food and an extraordinary dining experience — and sometimes “more is more” when it comes to curry.