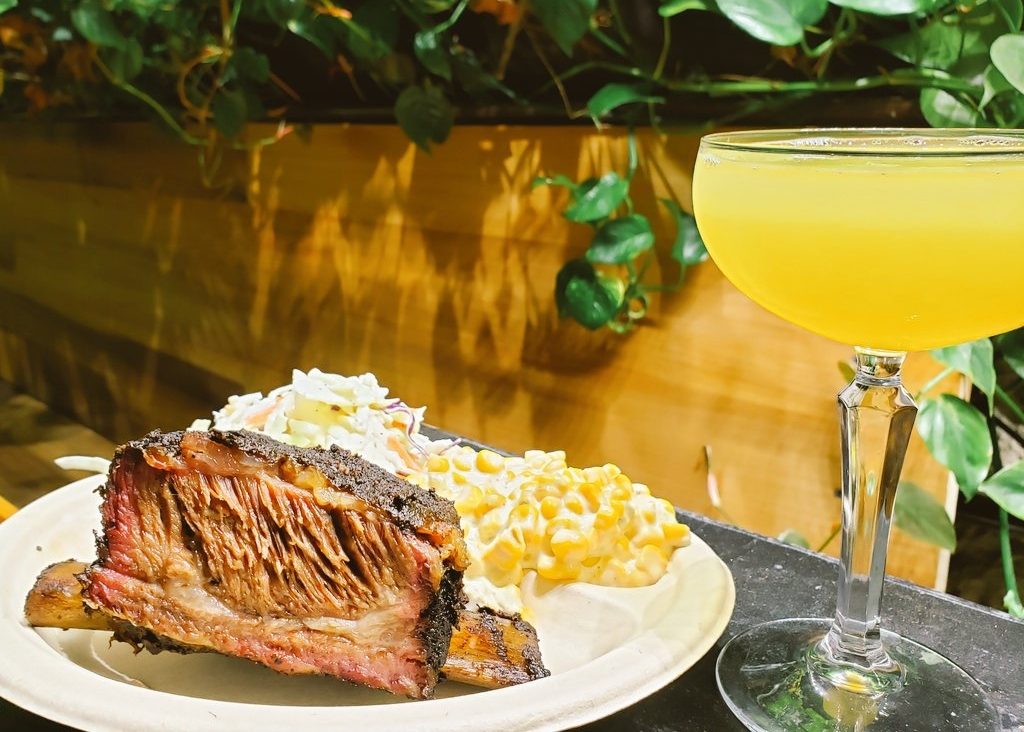 In recent years, Houston has become a hotbed for some of the best barbecue in Texas, with several outposts gaining the respect once reserved for only famous Hill Country joints. Houston-style barbecue has also found a unique regional identity thanks to its practitioners mixing Central Texas, Gulf Coast, African-American, Mexican and Asian influences.

While we have covered some of the best barbecue that Houston and its surrounding suburbs have to offer, we’ve yet to highlight the cultural influences that really sets it apart. In this list, we go beyond smoked brisket and pork ribs to showcase creative barbecue specials and ethnically-influenced dishes of barbecue restaurants around town.

Blood Bros BBQ, 5425 Bellaire: One of the most creative barbecue concepts in the state, Blood Bros BBQ is king of the daily specials. Famous for the use of Asian seasonings in the rubs for brisket and pork ribs, this Bellaire smokehouse first sparked interest with creative dishes like Smoked Turkey Banh Mi and Brisket Fried Rice. Recently, the innovative fusion concept rolled out three new daily specials: Smoked Spam Musubi, made with homemade pork spam and customer favorite Tri Tip Pastrami on marbled rye are available on Wednesdays. The latter is a deli classic on steroids slathered with housemade beer mustard and thick slices of Blood Bros signature smoked pastrami. On Thursdays, customers can order the even more decadent Marfy’s Beef and Cheddarer, a massive patty melt-style beef sandwich dripping with melted cheddar.

Buck’s Barbecue, 801 Postoffice Street, Galveston: Jim Buchanan’s barbecue endeavor might be the most recent brick-and-mortar on our list, but the Buck’s name has been well-known in Houston barbecue circles for a couple of years. (Buchanan started slinging smoked beef in the back of downtown’s Lucky’s Lounge in 2017 and, before that, worked at Pappa Charlie’s). The Buck’s concept first gained local traction for Buchanan’s creativity and penchant for straying from barbecue norms.

Buck’s is now gaining a local following on the island with an expanded menu of nontraditional barbecue dishes. Selections include Grilled Cheese and Brisket Sammich — a greasy mountain of melted cheese and brisket between two buttered and pressed pieces of toast — and popular items like Brisket & Blue Cheese Flatbread (pictured above), Asian-inspired Pork Belly Nuggets and the Tex-Cajun Brisket Debris Po’ Boy. All are available daily as Buck’s menu items.

El Burro & The Bull, 1010 Prairie: In the far corner of The Conservatory — downtown’s original underground food hall and beer garden — is El Burro & The Bull. It sells craft Texas barbecue and homemade Tex-Mex seven days a week. Beef ribs, however, are only sold on Saturdays. Specifically, El Burro & The Bull’s version is an ancho chile- and espresso-rubbed 44 Farms smoked short rib. The signature rub is made with Xela 713 espresso beans roasted in Houston (and available for sale at Henderson & Kane any day of the week, which you can read more about below).

Henderson & Kane, 715 Henderson: This small neighborhood bodega tucked into a sleepy corner of Sixth Ward is the successor to El Burro & The Bull, the popular downtown barbecue stand in the Conservatory food hall. Like the original, Henderson & Kane sells a full barbecue menu that incorporates both Tex-Mex and Cajun influences into its specials and signature items.

The H&K brunch menu is served from 9 a.m. to 2 p.m. and currently features two specials that perfectly summarize Houston barbecue. The Benedict Torta is a baby baguette filled with smoked brisket and a poached farm egg and dressed with a Cajun hollandaise and chives. It’s served alongside rosemary country potatoes and bacon. The Boudin Benedict is a nest of the house’s signature smoked boudin and also topped with a poached egg and Cajun hollandaise.

Killen’s Barbecue, 3613 East Broadway: Many consider Killen’s the pinnacle of Houston’s barbecue culture. However, even owner and chef Ronnie Killen has to innovate to keep up with expectations and stiff competition. He has extended hours while branching out into Tex-Mex BBQ dishes — and those later influenced his Killen’s TMX spinoff concept. Among its many specials and signature items, Killen’s Barbecue recently introduced a massive one-pound smoked burger topped with cheddar cheese, as well as a fair- and rodeo-inspired Funnel Cake. Both dishes are classic, American comfort foods now available daily on Killen’s BBQ menu.

Pappa Charlie’s BBQ, 25610 Hempstead: Owner and pitmaster Wesley Jurena closed his east downtown barbecue joint Pappa Charlie’s BBQ in 2018 and reopened it in Cypress. His search for larger digs and better parking made the suburbs an ideal location — a increasingly common story for independent restaurant owners.

For a little over a year now, the new Pappa Charlie’s (inside the Cypress Trail Hideout) has endeared itself to locals with boundary-pushing dishes like the Red, White & Blue Brisket — an Italian-inspired caprese salad served alongside sliced brisket — Brisket Cheesesteak, and the newly created Smoked Buffalo Ribs. The latter, pictured above, are smoked pork ribs tossed in buffalo sauce and served with blue cheese dressing. All three are available daily as standard menu items.

The Pit Room, 1201 Richmond: The intersection of Tex-Mex and Texas barbecue is no new concept. Both cuisines are steeped in ranching traditions that center around cooking beef and other meats over an open flame. While The Pit Room — an acclaimed barbecue joint in Houston’s Montrose neighborhood — is not explicitly Tex-Mex focused, the menu features a handful of Barbecue Tacos that rival the offerings of the city’s best taco stands.

The menu features three signature a la carte tacos that are available daily: beef, pulled pork and chicken. Each features its own unique blend of ingredients on housemade flour tortillas. The pulled pork, for example, includes pickled red onions, salsa verde, cilantro and cotija while the brisket features crispy burnt ends, cheddar cheese, sour cream and salsa roja. Pair any of the tacos with an order of the housemade Chicharonnes drizzled in hot sauce or a cup of authentic Mexican Elote.

Roegels Barbecue, 2223 S Voss: Hidden away on South Voss near Westheimer, Russell Roegels’ self-named barbecue joint is a classic, no-frills smokehouse with some of the best brisket in Texas. However, that doesn’t mean this pitmaster can’t also whip up some outstanding specials to compliment his world-class smoked meat.

On Thursdays, customers flock to Roegels in search of the famous Roegels’ Reuben, a sandwich with as much local acclaim as anything else on the menu. The weekly special combines Texas barbecue with the German/East European heritage upon which so much of Texan culture is founded. The sandwich features smoked and cured slices of brisket, sauerkraut slaw and Russian dressing on toasted rye.

Tejas Chocolate + BBQ, 200 North Elm, Tomball: Scott Moore probably never envisioned his humble, small-town chocolate craftory turning into one of the most revered smokehouses in Texas — much less it being number six on Daniel Vaughn’s list of the Top 50 Best Barbecue Joints in the state for Texas Monthly. However, after Moore realized he was using barbecue pits to roast cacao beans so he may as well use the heat to also roast meat, and recruiting his chef-brother Greg to run the pits to serve hungry customers, that’s exactly what happened.

As referenced elsewhere in this list, pastrami is having a moment in Texas barbecue, with smokehouses across the state turning out creative twists on the classic smoked beef staple. Tejas has a strong contender: the Smoked Pastrami Short Rib, which is available on Thursdays. It is impossibly tender, salty, greasy, coated in an unctuous and well-sealed bark and takes the innovative deli style barbecue to new heights.

Houston’s barbecue was once considered an underdog and of lesser quality than Central Texas barbecue. Here’s the thing: put someone in a corner and you have no idea what they’re going to do next. Houston pitmasters were forced to wrestle down the question of how their barbecue is unique compared to other styles of barbecue. It was Houston’s melting pot that helped them discover the path forward, and we can’t wait to see what they innovate next.