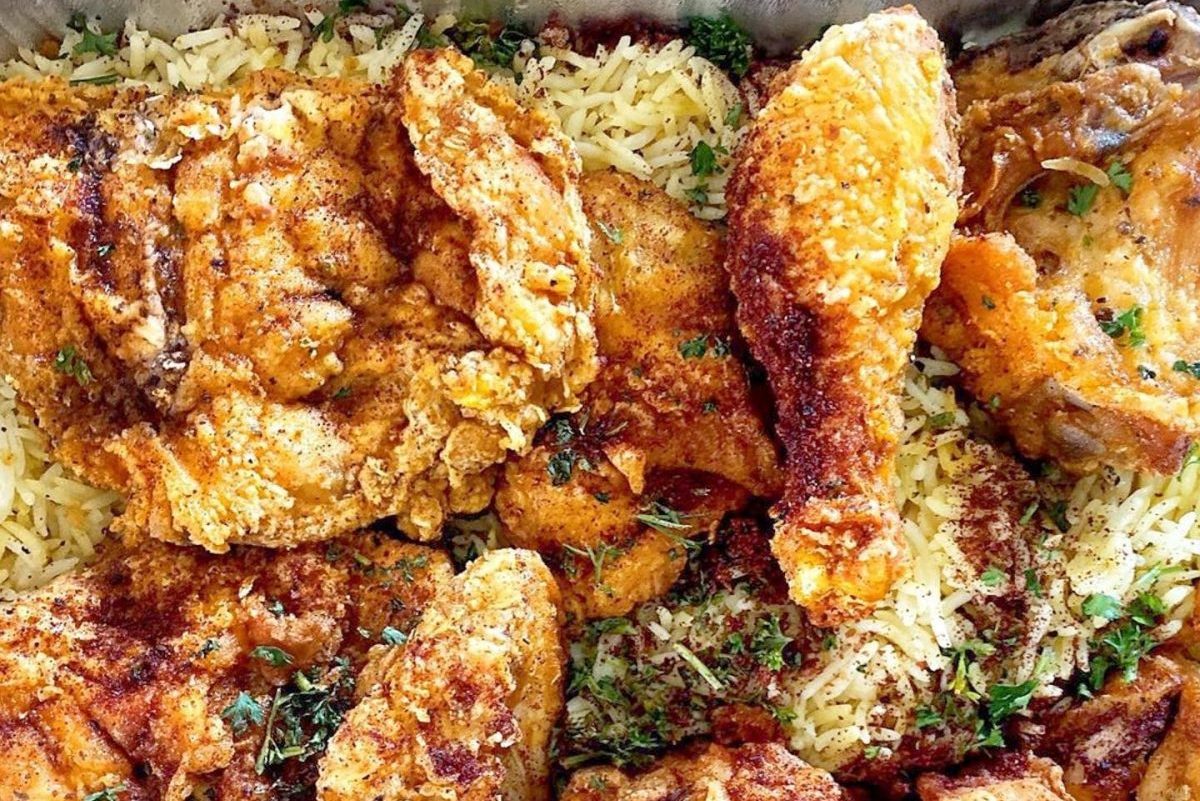 A few decades ago, if you wanted to start a fight, you’d ask two Southerners the right way to fry chicken — whether to use buttermilk, white pepper, corn starch, Crisco or peanut oil. For cooks and consumers alike, fried chicken is a deeply personal issue. Buttermilk-brined fried chicken with its durable crust is too fancy for the flour-dredge-only purists. Lovers of spicy chicken are divided between the seasoned breading of Louisiana and the hot chicken of Tennessee, where a spicy coat is added after frying.

Southern fried chicken, which is dredged in flour and deep-fried, likely originated in Scotland and was perfected by enslaved African Americans. It gained widespread popularity when freed entrepreneurs sold the moveable feast at train and then bus stations throughout the south.

Then came Kentucky Fried Chicken — now KFC — one of the most successful restaurant chains of all time. Whatever your opinion is on the quality of its product, it was responsible for sending southern-fried chicken on an all-expenses-paid trip around the world. The global explosion inspired chefs worldwide to play with different brines, flours, oils and coatings. With culinary innovations such as masala brines, spicy soy glazes and sumac dust, it is impossible to say which variation is “the best”. In Houston, the good news is you can try them all.

Al Aseel, 8619 Richmond: The oregano, za’atar and sumac are imported directly from Jerusalem for this Palestinian fried chicken. The herbs offer depth, and the dust of sumac adds tang to the crispy skin. The meat is also seasoned with garlic and is juicy and woodsy. It is served with crisp cucumber-tomato salad and fluffy almond rice, but giant hummus plates topped with ground beef, oil and parsley pair nicely, too. There are also familiar favorites such as shrimp kebab and beef kofta kebab served on mounds of rice, while the stuffed pigeon is a little more adventurous. The traditional roasted Musakhan Chicken is a delicious dish served with caramelized onions, flat bread and pine nuts. Enjoy a hookah while you wait and save room for the baklava.

Barbecue Inn, 116 West Crosstimbers: Time seems to have stopped somewhere in the ’60s at this Houston institution. Patrons are happy to wait 30 minutes or more to enjoy this fried chicken made from a 67-year-old recipe. Considering its substantial crunchiness, this is chicken in its most audible state. According to cookbook author and former Houston Press restaurant critic, Robb Walsh, Barbecue Inn’s fried chicken is made with a simple flour dredge and every piece is made to order. There is also fried catfish, shrimp, oysters and stuffed crab to represent additional southern favorites. For side dishes, choose among French fries, mashed potatoes, green beans, a salad or a baked potato. Restaurants that serve similar styles of southern fried chicken include La Lucha and Lucille’s.

Frenchy’s, multiple locations: This Louisiana-style chicken house opened in 1969 and won Houstonians over with its Creole sides of dirty rice, collard greens and red beans and rice. The spices in Louisiana-style chicken are tossed into the flour mixture rather than sprinkled on later. Now with 10 locations, it is an essential spot for authentic spicy chicken and homestyle sides. Frenchy’s also serves boudin balls and boudin rolls (an egg roll wrapper filled with boudin and then deep-fried), fried shrimp, hot creole sausage and peach cobbler. Order Family Boxes that come with up to 24 pieces.

Gus’s World Famous Fried Chicken, 1815 Washington: Diners are gently warned to expect fried chicken with significant heat at this joint, which originated in Memphis. Though the crunch is admirable, the focus here is on the spices. The hot chicken is generally fried in peanut oil, then basted with a spicy sauce and served on a piece of white bread. It is the sole main dish available at Gus’s, but there is an assortment of starters from which to choose, such as fried green tomatoes and fried okra served with ranch dressing. The chicken comes with sides of coleslaw and beans, but swaps include greens, potato salad or mac and cheese. For dessert, try the sweet chess pie. Similar styles of hot chicken include The Cook Shack and Mico’s Hot Chicken.

Harold’s Restaurant, 350 West 19th: Birds for this spot’s Buttermilk Fried Chicken come from Holmes Chicken in Nixon, Texas. Harold’s then double-brines the meat, soaks it in buttermilk, and breads it with flour, cornmeal and corn flour. It comes with mac and cheese, made with Texas cheddar, and braised greens. The Fried Chicken and Mash is a fried boneless breast served with mashed potatoes, sausage gravy and vegetables. Visit for Sunday brunch when the buttermilk fried chicken is served with housemade waffles. The vegetarian-friendly Chicken Fried Cauliflower offers a savory alternative with vegetables sourced from Atkinson Farm in Spring and presented perched atop a bowl of cheese fondue. They can all be enjoyed on the rooftop terrace that offers a great view of the Heights.

Himalaya, 6652 Southwest Freeway: Owner Kaiser Lashkari’s creative fried chicken at his nationally acclaimed Pakistani and Indian restaurant is called HFC Zimmern, with the letters an abbreviation for Himalaya fried chicken. It is a whole, skinless chicken (eight pieces) that is marinated in a ginger-and masala-spiced buttermilk and then dredged in seasoned flour. Lashkari recommends pairing HFC with Masala Waffles for an Indo-Pak take on the classic American pairing. Guests will find more fusion dishes such as Parantha-dilla, a quesadilla influenced paratha sandwich of lamb, beef chicken, vegetables or paneer, along with Mutton Biryani Bourdain, a mound of fluffy savory rice and tender mutton that is named in honor of the late food writer, show host and Himalaya patron Anthony Bourdain.

Izakaya, 318 Grey: Japanese-style fried chicken is called karaage, and is prepared by marinating strips of meat and dredging them in starch before frying. The result is tender chicken encased in a light, tempura-like batter. At Izakaya, karaage is served with a bright, citrusy yuzu marmalade. Find it in the small-plates section of the menu along with Miso Eggplant, roasted in a savory coating, and Kobe Beef Lettuce Wraps, which is Korean-style marinated grilled beef wrapped in crispy lettuce cups. You can also find karaage chicken at Samurai Noodle and Jinya Ramen.

Krisp, 9486 Long Point: At the Koreatown newcomer, order the Korean fried chicken in original “plain”, or choose from seven flavors of sauce such as honey butter, creamy onion, garlic and kalbi marinated. Other traditional Korean dishes can be found, too, such tteok bokki, a rice-and-fish cake topped with fried dumplings and egg. Kimchi is also on hand, as well as cheese dumplings, sweet potato fries and corn and cheese. Korean chicken is also available at Dak & Bop and The ToreOre in H-Mart.

Max’s Restaurant, 8011 South Main: You will want to bring a friend to try this breading and batter-free Filipino-style whole fried chicken, which is fried and served in its entirety alongside banana ketchup and Worcestershire sauce. Despite the lack of breading, the skin is incredibly crispy and the meat tender and flavorful. Though Max’s is new to Houston, it was established in 1945 and has become an international chain with stores throughout the Middle East and the Philippines. This is an authentic Filipino restaurant where you will find dishes such as laing, taro leaves simmered with coconut milk and kare kare, simmered beef shank and oxtail in a peanut sauce. Somewhat similar to the fried chicken is the fried ham hock, Max’s Crispy Pata, served with a soy vinegar dipping sauce. For dessert, the Halo-Halo Special is a shaved ice of tropical fruit preserves, beans and milk topped with flan, purple yam ice cream and rice flakes.

Street to Kitchen, 6501 Harrisburg: “Unapologetically Thai” is the motto of this modest kitchen. To achieve authentic flavor, the owners grow their own herbs with seeds from Thailand and make housemade curry pastes. Khao Man Gai Tod is chef Benchawan Jabthong Painter’s spin on a steamed Thai chicken classic, made even better because it’s fried. The chicken breast is marinated in garlic, pepper, and fermented mushroom sauce, then breaded in rice flour and fried until crispy. It’s served with garlic rice and comes with three sauces: Spicy Green Thai Chili Cilantro, Soy Chili, and Sweet Chili. Curries like the Panang Pork Curry are made with mild, thick, creamy curry with sliced pork and served with jasmine rice. The Mango Sticky Rice is made with sweet coconut milk, ripe coconut and a pillow of sticky rice.