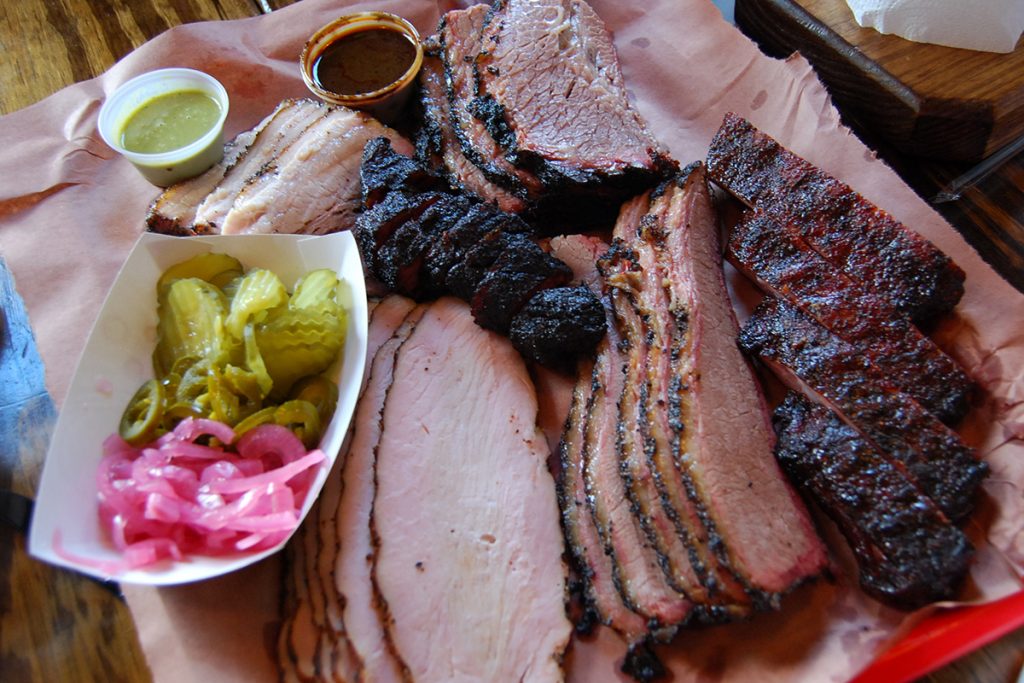 A platter of the many meats at Tejas Barbecue + Chocolate. Photo by Scott Sandlin.

“The List” is out—the one we’ve been waiting on for four years. Texas Monthly’s picks for its quadrennial 50 Best Barbecue Joints in Texas list have been revealed. In other words, it’s now time for the months of debating, defending, and discrediting the findings on social media to begin!

Here are the top 10 barbecue joints in Texas for 2017, according to Texas Monthly, and two are just outside of Houston. One is in Tomball and the other in Spring.

The remaining 40 are sorted by city and then in alphabetical order, but are not ranked numerically. Five other Houston-area favorites, Killens Barbecue, Gatlin’s BBQ, Pinkerton’s Barbecue, The Pit Room and Roegels Barbecue Company, earned spots in the Top 50.

The presence of seven Houston joints in this year’s rankings means it’s time to stop dismissing the Bayou City as some type of “barbecue wasteland”—a stigma we’ve been trying to shake for years.

The approach to the development of this year’s winners was somewhat different than in year’s past. Evaluation forms were prepared and distributed to the research team, with a number of pre-established questions and items to consider. Each was weighted and totaled to achieve the final ranking for the 2017 list, resulting in a mathematically derived point ranking for the Top 10 joints. The rest of the list includes all the places that met or exceeded the Top 50 point threshold, without a specific place ranking. Previous Top 50’s had more geographic balance, and featured local favorites from across all regions of Texas, along with a few of the big city places.

Houston has had its places on the list over the years. A couple of the early notables, like Goode Company, are still around, but others have gone by the wayside, pushed out by the wave of barbecue startups in the past five years. Five of the Houston establishments on this year’s list didn’t even exist the last time the rankings were released. CorkScrew had just opened their small trailer.

Since “The List” was last published in 2013, barbecue in Texas—and especially Houston—has exploded, spurred by Franklin Barbecue’s debut at 2013’s number one spot.  Franklin Barbecue, among many others on the list, caught the rising tide of barbecue as a food spectacle, mirroring the development of social media and food-centric reality television.

Texas Monthly’s List of the 50 Best BBQ Joints is a public relations boon for those who are fortunate to have been included. Top 50 winners still proudly display framed copies of the magazine article with their listing even if it was from the 2008 issue or earlier. The pride and honor in having been included doesn’t expire over time. The publicity from the list will likely translate into more customers for many months, or even years, to come.

Despite all the scoring system, barbecue rankings are still notoriously subjective, and the results will not please everyone. If your favorite place didn’t make it, don’t stop giving them your business. There is so much more to Texas barbecue than just who cooks the best meat.