Eats & Greets: Helen In The Heights Is Now Open 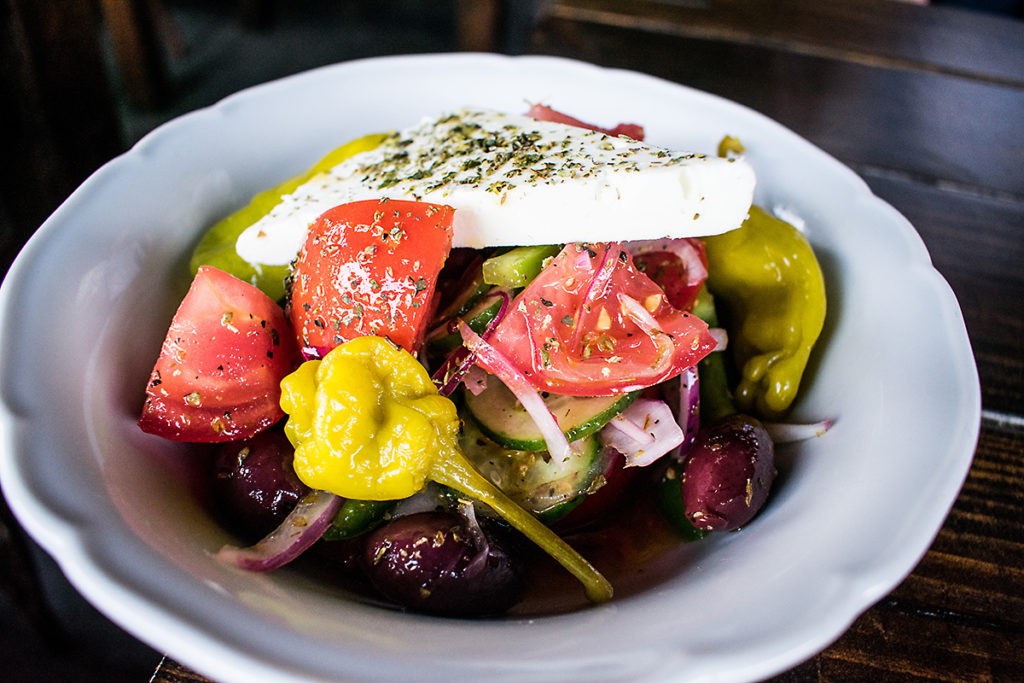 The Village Salad, a seasonal dish, is now available at
new Helen In The Heights as well as Helen Greek Food & Wine.
Photo by Christine Lee

Before Rice Village hotspot Helen Greek Food and Wine opened, co-owner and sommelier Evan Turner was quoted as saying it would be either be “wonderful, or a dumpster fire of epic proportions.” Fortunately, it turned out to be the former. After opening in July 2015, the restaurant picked up a slew of honors, including a James Beard Best New Restaurant semifinalist nod in 2016. Earlier this year, chef William Wright was a semifinalist in the Rising Star Chef category. Turner won the Iron Sommelier title in 2016 amid a field of Houston’s top wine professionals. Now, the popular eatery has opened its first true spinoff, Helen In The Heights, at 1111 Studewood.

It follows Arthur Ave—an unfortunate foray into New York-style Italian food in the same location—which shuttered last March. The goal of the new place, Helen In The Heights, is for diners to feel as if they’ve stumbled upon a casual tavern on the beach in the Greece. Come as you are, and order up a bunch of Greek comfort food along with killer wines and cocktails. Afterward, diners might decide to linger a little longer, laugh a little louder and order another round.

Helen in the Heights serves some of Helen Greek Food and Wine’s signature dishes, such as Greek Village Salad, Feta-Brined Chicken and Greens-N-Cheese Pie, then tacks on more traditional Greek fare, including Pastitsio, Moussaka, gyros, Avgolemono soup and Cheese-N-Cheese Pie.

Start with that last dish, because the take on tiropita is flat-out excellent. Flaky, buttery phyllo dough surrounds rich feta cheese, then is topped with sesame seeds and baked. It’s the kind of simple dish that made the diners at our table rave on the first bite. Ditto on several of the Greek dips, which diners can order in groups of three. The tzatziki is a refreshing creamy yogurt and earthy dill dip, and although it was saltier than expected, it was evocatively Greek. The skordalia was the table favorite; all garlicky goodness that made extra pita a necessity. The olive dip, briny with bright acidity, was also enjoyable.

Pastisio and Moussaka vie for best comfort food on the menu. Lasagna lovers will dig the pastisio, with its long tubes of pasta intermingled with savory spiced beef, tomato and a creamy béchamel sauce. The Moussaka, has a touch more sass, swapping out pasta for pan-fried eggplant with potato. The eggplant brings a snap of acidity and slight bitterness to the rich dish, and the béchamel—with its velvety texture and kiss of nutmeg and cinnamon—is a delight.

If the gospel of Greek wine is central to Helen Greek Food and Wine’s existence, creating a craft cocktail program to counter that is an essential element of Helen in the Heights. John Bearden, who brought his craft creations to Arthur Avenue, reprises that role here by concentrating on drinks that complement the food. While he’s kept the popular Arthur Ave gin and tonic, he’s also infused the bar menu with options that are refreshing and easy.

Siga Siga (which is a Greek expression for “take it easy”) is a sunny blend of dry vermouth, gin, lime cordial and soda. This is the sort of drink that goes down easy, with the juniper in the gin bouncing off the tartness of the lime. The Golden Arrow, billed as “Love at first sip” on the menu, seems contemporary and classic at the same time. Bearden’s combined a spiced Greek brandy with Campari, lemon, and his own special “love potion,” making for a cherry-red drink that looks Jolly Rancher sweet but in reality has some heft. The Campari makes a terrific partner for other flavors reminiscent of baking spices.

Finish with either the Baklava Sundae (another original Helen staple), in which vanilla bean ice cream is invaded by sticky baklava then drizzled with chocolate sauce, or the Feta Cheesecake, a wonder of fluffy cheese perched atop crumbly pie crust and then topped with a candied orange and a little pool of orange sauce.

Custom ouzo tastings are available and a bartender will bring the flight to the table to help answer any questions about each selection. Ouzo is also used in the Ouzito, basically a Mojito that swaps the anise-flavored liqueur for rum.

Anyone who thought Helen Greek Food and Wine had too many Gulf Coast ingredients to be “really” Greek are in for a real treat with the more traditional fare at Helen In The Heights.