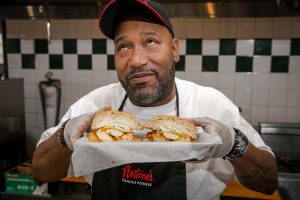 Whether or not you agree that its Tex-Mex Cheesesteak is the best-in-category in America, it’s undeniable that Antone’s Famous Po’ Boys — and its most popular sandwich first created by Jalal Antone 57 years ago — is a staple of Houston’s dining landscape. The company, which Legacy Restaurants has owned and operated for quite some time now, has recruited local celebrities to come up with their own exceptional sandwich creations to benefit a charity selected by the celebrity. It’s being called the H-Town Originals campaign and, at the end, Antone’s Famous Po’ Boys is giving an additional $5,000 to the charity selected by the celebrity whose sandwich sold the best. Each is working alongside executive chef Alex Padilla to develop his or her special creation.