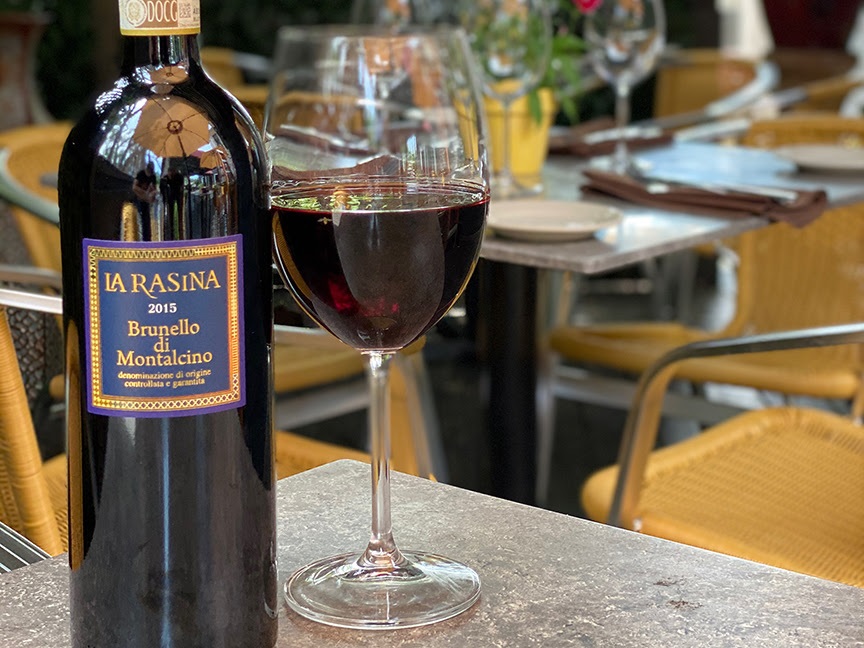 This Thursday evening’s virtual wine dinner celebrates La Rasina Brunello di Montalcino from the already legendary 2015 vintage in Tuscany.
The first wine in this week’s flight is another icon of Italian viticulture: The 2019 Mario Schiopetto Pinot Grigio. This wine became one of the benchmarks for Italian whites in the 1980’s when Mario nearly highhandedly revolutionized the white production in the country (that will be one of the topics of discussion this week).
Then Roma moves on to another iconic Italian wine from one of the country’s greatest wine pioneers, Walter Massa. In the 1990s, Walter became the first standout producer in the western hills of Piedmont, once considered the not-as-pretty step-sibling of Barolo and Barbaresco. You will be tasting his 2019 Barbera, a go-to food-friendly wine and a favorite of Italian wine lovers on both sides of the Atlantic. This one is a wine hipster wine!
But the main event will be the Rasina 2015 Brunello, the King of Sangiovese. The smaller Rasina farm is located adjacent to one of Brunello’s most recognizable names, Casanova dei Neri, the first Montalcino producer to achieve a 100 point perfect score from Wine Spectator. La Rasina isn’t as famous or big as Casanova but the wines are grown in vineyards that lie side-by-side with its more famous peer. The 2015 vintage has been hailed by critics across the board as the “greatest of the decade.” Some might argue that 2013 or 2016 should be in the category as well but all agree that 2015 is a classic, powerful vintage for Brunello. Resident wine guy, Jeremy Parzen, has spent a lot of time on the ground in Montalcino and he has some tall tales to share! We hope you can join us.
The Sangiovese King:
Brunello di Montalcino
VIRTUAL WINE DINNER
Thursday, May 20
7:30 p.m.
Please email to reserve.
$119 per couple
(we regret single meals are
not available for this event)
Includes 3 bottles of wine.
Pick-up between 5-7 p.m.
Dinner at 7:30 p.m.
Guests will be provided with a Zoom link.
MENU
Insalata di Anatra e Mozzarella
Duck and mozzarella salad
Schiopetto 2019 Pinot Grigio, Friuli
Gnocchi ai Quattro Formaggi
Four-cheese gnocchi with red wine reduction
Walter Massa 2019 Barbera Fuso, Piedmont
Cosce di Pollo alla Diavola
Country-style braised chicken thighs with bell peppers
La Rasina 2015 Brunello di Montalcino, Tuscany