Ming Tsai On Houston Restaurants, Kitchen Tools and The Cause Dear To His Heart 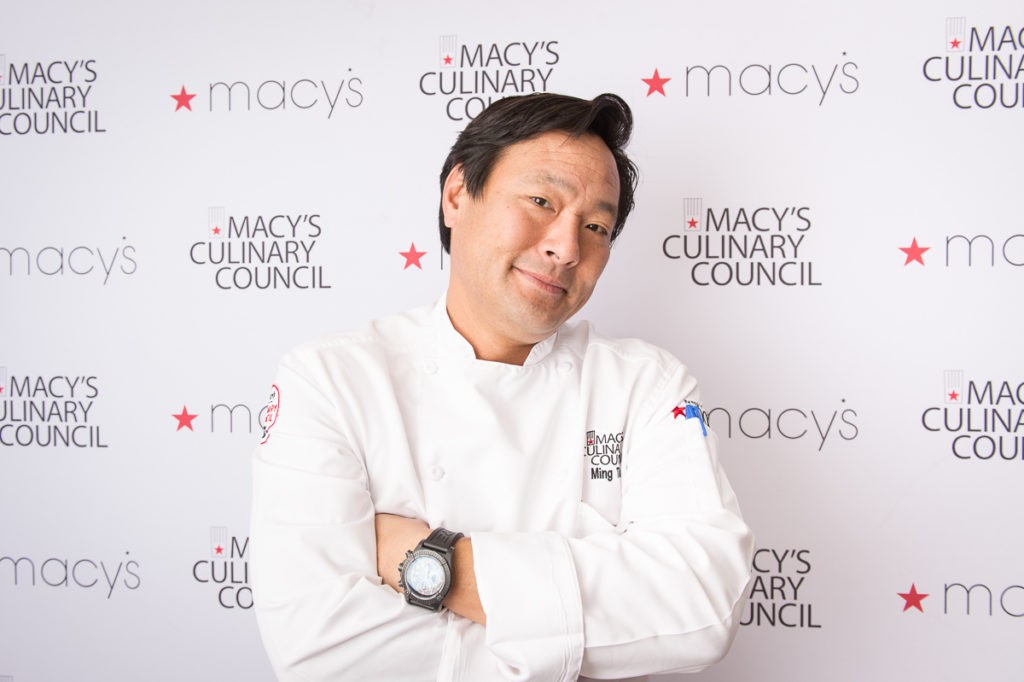 Chef Ming Tsai was recently in Houston for a Macy's Culinary Council event
and we covered a lot of ground in 20 minutes. Photo by Chuck Cook Photography

Celebrity chef Ming Tsai was in Houston on Monday for a Macy’s Culinary Council cooking demo and signing of his fifth book, Simply Ming In Your Kitchen, which Tsai says encourages home cooks to customize the recipes to their preferences.

“A cookbook should not be gospel,” he explained. “It should be the base of inspiration for everyone who wants to cook. What I mean by that is there could be a chicken satay recipe. You need to buy chicken for that as the base, but if you’re Mexican, throw in some jalapenos. If you’re Chinese, put in red chilies. If you’re Korean, throw in some kimchi because then, you’re actually cooking. If people do that with my cookbook, that’s a successful cookbook.”

His most recent Houston visit wasn’t his first and is almost certainly not his last, either. Tsai’s restaurants, Blue Ginger and Blue Dragon, are located in Massachusetts, but he’s probably more familiar with Houston’s food scene than anyone might guess. “This is my fourth or fifth time—maybe sixth. The first time I visited, I cooked with Yao Ming when he was playing here still [with the Houston Rockets]. We cooked Peking Duck together. He’s a better basketball player than cook, but I think I’m a better cook than basketball player so it all worked out,” Tsai said with a good-natured grin.

From there, Tsai rattled off a list of some of Houston’s top restaurants. He had visited Uchi the night before (“It was quite good”), visited Mai’s for a quick bowl of phở and chả giò for lunch and was visiting Underbelly that evening for dinner. On his previous trip to Houston, he visited The Pass (the fine dining side of The Pass & Provisions). “Really great chefs there and they fed us fantastic charcuterie. We ate so much there. The great news of being a chef is you get fed really well,” he said.

Tsai is also close friends with Houston chef Bryan Caswell. “We were on ‘The Next Iron Chef’ together [on Food Network] and hung out a lot. Reef is fantastic and I love Little Bigs. I have yet to go to his Mexican place that took over the movie theater [El Real Tex-Mex]. I hear it’s an awesome place of greasy deliciousness, which I love.” For a future trip, one of Ming’s goals is to crawl the restaurants of Houston’s International District.

All of those things are big parts of Tsai’s professional life as a chef. On a personal level, though, there’s a social injustice that deeply disturbs him and it’s one that he’s working to improve: the financial devastation that cancer victims and their families suffer while pursuing treatment. He is on the board of directors of Family Reach, an organization that acts as a financial lifeline to families whose funds have been drained by fighting the disease. Among other things, Family Reach prevents issues like families being evicted from their home, having utilities turned off or not being able to get to medical appointments because of lack of transportation.

Tsai says it is the only national organization that does so and that he spends nearly half of his time on the cause. According to the Family Reach web site, Tsai “hosts Family Reach families at his restaurants, offering them a rare night out to enjoy delicious food and a heavy dose of positive energy and encouragement. Ming has traveled to various Family Reach partner hospitals across the country, providing cooking demonstrations for cancer patients and their families, teaching them the importance of wholesome meals. Through his many efforts on behalf of Family Reach, including the Cooking Live! event series he created in 2012, he has raised millions of dollars.”

“If your kid gets cancer, it’s the worst thing that can happen to a parent,” Tsai explained. “Give me the cancer, not my two sons, right? But once you get over that shock, that your kid has cancer—your kid may die, can you imagine—the last thing on people’s minds is they may end up homeless, their cars are going to get impounded and they can’t even afford the garage to park at the hospital. What mom or dad should have to make that decision? That’s not even charity—that’s humanity.”

Tsai’s work with Family Reach was recently featured along with fellow chefs Sandra Lee and Donatella Arpaia in a TLC special entitled, “Unichef: Uniting Through Food” that was inspired by Hilary Gumbel’s best-selling compilation of recipes from world-class chefs. Watch the video below for an excerpt from the program where Tsai tells the story of a mom and her son who had to live in a homeless shelter for two years while battling the disease.

One of Tsai’s other favorite projects is unabashedly more commercial in nature—selling his Simply Ming cookware on HSN (the Home Shopping Network). “I love doing HSN because it combines my fortes. I love cooking, so I’m cooking and teaching. I am Chinese, so I love selling, right? I just start slicing faster and faster the more [a product] sells! It’s entertainment, right?” he said with a grin.

Cooking with inferior tools, though, is no laughing matter to Tsai. “It doesn’t matter the brand, but you have to have a sharp knife. You just can’t cook—you cannot prep—without a sharp knife. The most accidents ever are from dull knives, not sharp knives. Get a knife with a good board. Do not, do not, do not use a glass board. Every glass board in the world should be destroyed. They’re great for presenting but not for slicing. You’re killing your knife! I like bamboo because it’s sustainable, as hard as oak and has a natural antibacterial quality to it.”

He also cautions against hard plastic cutting boards, saying that even though these can go into dishwashers, the score marks left by sharp knives will still retain dangerous bacteria. “Everyone thinks that’s the safest board in the world. Wrong. When you cut raw chicken on the board, you’re actually putting raw chicken juice in the line. Even in the dishwasher, because it’s wet the raw chicken juice could actually still be in there. If it’s bad chicken, salmonella is still there. Good cutting boards are maple, oak and bamboo.”

Another of Tsai’s kitchen requirements is good pots and pans. He says the single most useful one is a flat-bottomed, non-stick wok with a stainless steel handle so that it’s also oven-safe. “No one has the big burner to properly season a wok and get the stuff out, so nonstick does that for you. The wok is the most versatile pan ever. You can cook for four. You can do an egg for one. You can make pasta primavera or lasagna in it because it can go in the oven. Of course you can sautee, wok-stir, steam and boil pasta. It has great surface area and it’s the most perfect-sized vessel for frying.”

He also recommends getting an immersion circulator and shared a useful technique for it. Season a turkey breast with garlic, thyme and olive oil. It’s ideal to seal it with a vacuum sealing machine but since those are expensive and most people don’t have one, Tsai says simply sealing it in a Ziplock bag will suffice. “145.5 degrees for 2.5 hours makes the perfect, delicious turkey breast—the best I’ve ever put my lips on. It was like butter. People couldn’t stop eating it,” he said.

To keep up with Tsai and his latest projects, visit his web site: www.ming.com.