If You Can’t Get to a Tex-Mex Restaurant, Ford Fry’s Cookbook is the Next Best Thing 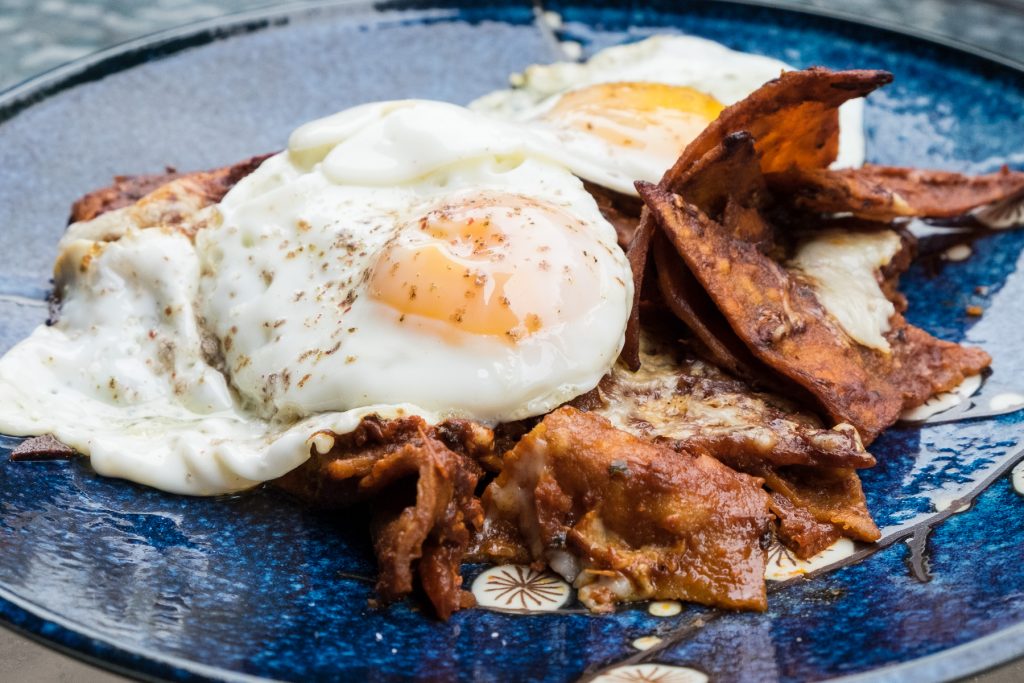 Chilaquiles made from chef Ford Fry's Tex-Mex cookbook. (The eggs are slightly overcooked. It was still delicious.) Photo by Phaedra Cook.

Anyone who has to be away from Texas longer than two weeks knows the sadness of not having a source of good ol’ Tex-Mex comfort food. Those who spend enough time in the Lone Star State find that certain cravings become part of them forever. It was no different for chef and restaurateur Ford Fry.

Fry grew up in Houston but moved to Atlanta in 2007. Like many families in the Bayou City, his dined out on queso, fajitas and enchiladas at legendary Tex-Mex establishments such as the now-closed Felix Mexican Restaurant (the most popular location is currently home to Uchi) and Armandos. He’s now written co-authored a cookbook with Jessica Dupuy that’s simply titled, Tex-Mex.

To satisfy his cravings, Fry opened a neighborhood Tex-Mex joint in Alpharetta, just outside of Atlanta. The name — The El Felix — is an unsubtle homage to legendary Houston restaurateur and civil rights leader Felix Tijerina.  Next came Superica, which was inspired by Austin and West Texas cantinas. Fry opened two locations before, in a full-circle homecoming, he opened one in Houston in 2018. Superica is a living memento to the long-gone restaurants he grew up with. Its nostalgia-infused pedigree is similar to El Real Tex-Mex in Montrose, which displays artifacts and old menus from departed restaurants on the second floor. Food historian and former Houston restaurant critic Robb Walsh is a co-founder of El Real and authored many books on Texan fare, including his own Tex-Mex Cookbook. (Note that the word “Cookbook” is the only difference between Walsh’s book title and Fry’s.) He gets a nod in Fry’s introduction, as does Mexican-cuisine maven Diana Kennedy. She’s cited for outing Tex-Mex as not true Mexican food, thus defining it as its own cuisine. Near the end, there is also a heartfelt acknowledgment of the late Jim Goode of the Goode Co. restaurants, whose roots in Texas cuisine include the cooking of his Mexican mother and grandmother.

Fry also acknowledges Tex-Mex’s “deep roots in Mexico” and the “many [Mexican] cooks, servers, dishwashers, and table bussers who sustained Texas’s small-town diners, cantinas and big-city restaurants over the years.” It’s worth noting that some of the best-known names affiliated with this cuisine are often not Mexican-American. Tex-Mex’s history is complex and complicated and from its earliest days it involved both Anglo and Mexican restaurateurs. It evolved from both cultural apportion and cultural adaptation. Fry’s acknowledgement of Tex-Mex’s debt to Mexican culinary heritage is a good place to start the discussion on this important issue. For further discussions, you may want to check out Adán Medrano’s books Truly Texas Mexican: A Native Culinary Heritage In Recipes and “Don’t Count the Tortillas:” The Art of Texas Mexican Cooking.

Now on to the recipes.

Before any home cook delves into Tex-Mex, they have to make an important decision: to make tortillas or not. Tortillas are a fundamental ingredient of Tex-Mex and the effort to make your own is going to result in a flavorful pay-off (although contributing editor David Leftwich informs me that rendering lard is a real pain in the ass). However, there is no shame in using store-bought or, as Fry recommends, restaurant-bought tortillas, and those other fundamentals, shells and chips. Just inquire at your friendly neighborhood purveyor. If you don’t have one, this book gives you the tools to do without.

Once the tortilla decision is made, there are, as in many cuisines, a few “mother” sauces that are key components of Tex-Mex. First, tackle the Standard Chile Paste — it’s on page 66,  the one with the mournful-looking fox. I made this for the soul-satisfying Cheese Enchiladas con Chili Gravy (page 124) and still had plenty left over for chili (I used my own recipe) and a righteous chilaquiles breakfast (page 43). The paste can be stored in the fridge for up to two weeks and as it stays in there, it gets as glossy and silky as melted dark chocolate. (If you also make a batch of chile con queso to snack on while cooking, we can hang out.)

Another base recipe to consider is one of the salsas, whether it’s the breakfast salsa on page 36 or one of the many others that start on page 111. According to Fry, the fresh salsas have a refrigerator-life of only two or three days,— that is if you don’t eat them right away. The exceptions are the chile de árbol-based Super-Spicy “Staff Only” Salsa (lasts up to a week), Cowboy Gringo Table Hot Sauce (lasts a month) or the intriguing Salsa Macha, a blend that includes peanuts or almonds, sesame seeds and dried chiles, which supposedly lasts up to three weeks — only it won’t because there won’t be any left by then. I actually rescued a batch of terribly dry chicken breast from a restaurant by shredding it and mixing in a batch of salsa verde. The effort was well worth it as I reaped the reward of chicken salsa verde tacos for a few days.

Fry’s recipes are home-cook-friendly because the cuisine is flexible, with zero tolerance for snobbery and opportunities for shortcuts. The trick is knowing when cutting corners is okay and when it’s better to go full-tilt. Fry admits that sometimes chicken bouillon is an unbeatable seasoning (he recommends Knorr’s Caldo con Sabor de Pollo) and he’s not going to look askance at someone who uses Gebhardt’s pre-mixed chili powder. He draws a line at cumin, though, recommending that cooks toast whole seeds and then grind them to get the full pungency. It’s a quality that rapidly dissipates in the store-bought, pre-ground versions. I also wholeheartedly agree with his recommendation for Rancho Gordo heirloom beans and rendering lard at home. There’s just nothing that compares on most grocery store shelves.

With a few essentials out of the way, Fry’s recipes can make your kitchen your Tex-Mex oyster — by the way, Grilled Oysters Divorciados are on page 165. You can now dive into a wide world of tacos, enchiladas, tamales, cooked or marinated seafood, charcoal-grilled meats, traditional desserts such as pralines and tres leches and much more. Fry and Dupuy manage to pack all these Tex-Mex essentials into less than 250 pages. The cocktail chapter, which goes beyond margaritas and Bloody Marias, feels like a bonus. The Highwayman cocktail on page 247 — a simple-but-sophisticated mix of mezcal, agave-honey syrup and mole bitters garnished with both orange peel and coffee beans — is especially intriguing and unexpected. (Want someone else to make it for you? Visit Superica. It’s on the drink list.)

With its bright pink, green and orange dotted halftone graphics, Tex-Mex seems to take its inspiration as much from old comic books as it does ‘50s restaurant menus. The layout is whimsical, yet easy to read, thanks to book designer Laura Palese, and photographer Johnny Autry’s photos are rich and colorful. There is even a textural aspect thanks to the glossy finish used for the full-page photos. The result is an irreverent, riotous look from cover to cover.

For wayward Texans or those who simply want to try their hands at cooking Tex-Mex at home, Fry’s cookbook is indispensable. In the right hands, the pages are destined for splatters of oil, cheese and chili gravy — and that’s high praise, because good cookbooks are to be loved and used. For as long as Velveeta exists, Tex-Mex — both the book and the cuisine — has a rightful place on the bookshelf and in the Texan kitchen.

Disclosure: the author received a review copy of this cookbook and is the owner of a lonely Tex-Mex heart.

Houston Food Finder6 hours ago
CONGRATULATIONS to Mish Bryant who is our randomly drawn winner of a FREE Autumn Goodie Box! She won thanks to 1) purchasing the prior box and 2) posting an unboxing video with the hashtag #hffgoodiebox. We're sharing her video for your watching enjoyment below. The Autumn Goodie Boxes are being finalized now, and will be on sale very soon. You don't want to miss these, which are chock-full of gift cards, snacks, swag and more from independent Houston restaurants, bars and other food and drink businesses. Only 50 will ever be created of this edition. We are in need of a few more gift cards to round out the Autumn box, so if you'd like your business represented, email phaedra@houstonfoodfinder.com. Thanks to all of our supporting reader and sponsors!

Houston Food Finder10 hours ago
This year, the Speed Rack competition events were scaled back due to the pandemic, but there was still an exciting end result for a Houstonian. Local bartender Sarah Troxell of The Toasted Coconut and Nobie's was this year's national winner. It's a goal she's worked toward for years. In a new podcast episode, our editor and publisher Phaedra Cook speaks with Sarah on her win and what her plans are for the future.

After years of practice and competition, Sarah Troxell of The Toasted Coconut is the 2021 national Speed Rack winner. Houston Food Finder editor and publisher Phaedra Cook talks with Sarah about the b
5    View on Facebook

After years of practice and competition, Sarah Troxell of The Toasted Coconut is the 2021 national Speed Rack winner. Houston Food Finder editor and publisher Phaedra Cook talks with Sarah about the b
3    View on Facebook

Houston Food Finder with Rainbow Lodge.1 day ago
It’s not too early to order your favorite Rainbow Lodge dishes to enjoy at home on Thanksgiving. Pre-order a la carte meats and side dishes for pickup November 23 through 25. Choose from entrées of Beef Tenderloin, Bison Tenderloin, Whole Roasted Turkey, Quail and Duck to pair with sides such as Wild Mushroom Risotto and Potato, Brussels Leaves and Onion Hash. There is Smoked Duck and Andouille Gumbo, bread and dessert too! View the Thanksgiving To-Go menu on the website and call (713) 861-8666 for pickup. Note that 48 hours’ notice is required for Thanksgiving to-go orders. View the full menu online at https://www.rainbow-lodge.com/thanksgiving-to-go

Houston Food Finder1 day ago
Event Alert: Join Impero Wine and the Italy-America Chamber of Commerce of Texas at Epicure-Cafe Houston on Thursday, October 28 for a night dedicated to live music, delicious food and wines.