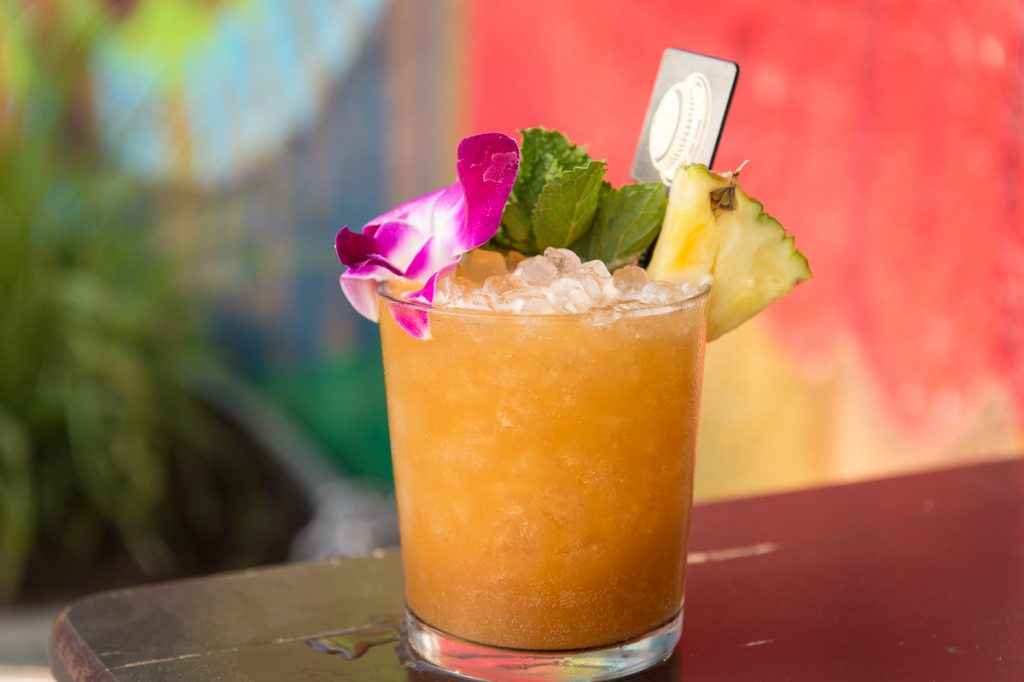 Tiki cocktails are famous for deceptively potent blends of liquor–often rum, but not always—fresh juices, funky syrups and creative garnishes. Connoisseurs of these drinks know that the right season to imbibe is—well, any time of the year. For many people though, summer is when they crave these island-inspired libations.

While some people think anything made with grenadine, served in a coconut, or garnished with an umbrella as a tiki drink, that’s not quite correct. Tiki drinks are craft cocktails deliberately constructed to balance citrus, savory and sweet elements. They also often feature rum. Texas’ own Don the Beachcomber and “Trader” Vic Bergeron started the tiki craze in the late 1930s and 1940s. (Check out the writings of Jeff “Beachbum” Berry for in-depth history of Tiki culture and cocktails.)

Houston has a fair share of authentic Tiki drinks that evoke island vacations. Here’s a list of favorites.

Mai Tai On Tap at Lei Low, 6412 North Main: : Some tikiphiles take issue with Russell Thoede’s nitrogen-preserved cocktail, but anyone who’s ever been in this Greater Heights hotspot on a Friday night can appreciate what a thing of beauty he’s created: a tasty tiki libation that didn’t take 10 minutes to make. The recipe is inspired by one Trader Vic used when he created a version of his signature cocktail for Waikiki’s famed Royal Hawaiian hotel. The blend of Jamaican dark rum, demerara dark rum, orgeat, fresh lime, orange and pineapple juices and bitters makes for a drink that is big, boozy and gently citrusy that will transport visitors to the sun-swept beaches of Hawaii. Bonus: Lei Low will happily make a whole Mai Tai flight upon request. There are three variants, all based on early incarnations of the beloved cocktail. The flight includes the original version invented in 1944, which isn’t on the menu.

Navy Grog at Howie’s Tiki Bar, 4334 FM 2920, Spring: When Mark Voros opened his atmospheric bar in February 2016 after crisscrossing the country to learn about classic tiki drinks. The menu reflects his wanderings, divided into classics and seasonal cocktails. It’s hard to get more classic than a Navy Grog, which traces its roots back to to the mid-1740s, when British sailors began mixing rum from the West Indies with water to make “grog.” Howie’s version is a lip-smacking drink made with Ron Cartavio Silver,Ron Cartavio Black and Appleton Estate rums, as well as honey and lime. The result is a drink that feels light and refreshing, even as it packs a big punch.

Frozen Suffering Bastard at Double Trouble Caffeine & Cocktails, 3622 Main St: The Suffering Bastard was created in the 1940s at the Shepheard Hotel in Cairo by a bartender named Joe Scialom. The combination of gin, dark rum, lime and ginger beer is here to stay. was marketed as a hangover cure, or, at the very least, as a drink that would make British soldiers forget there was a war taking place outside the hotel’s doors. (The Atlantic and Just Cocktails online ‘zine lend more color and truth to the drink’s history.) Double Trouble owner Robin Berwick is a tikiphile and her cheeky, frozen version of the classic is a killer combo of old-meets-new. The mix of bourbon, London dry gin, lemon, Angostura bitters and spicy ginger beer make this grown-up slushie one of the best frozen drinks you’ll find this summer in Houston.

Tortuga at Anvil Bar and Refuge, 1424 Westheimer: A cousin of the Zombie, the bright, sassy Tortuga features a sweet edge alongside refreshing citrus. Panamanian and overproof rums blended with Curacao, sweet vermouth, lemon, lime and grenadine make this cocktail feel like the breezy Haitian island for which it’s named. Cocktail history shows the Tortuga was originally a non-alcoholic libation, but that was before Trader Vic got his hands on it in the 1930s and added rum. Anvil’s bartenders have put their signature touches on this lesser-known tiki drink, and the result is a stunning historical homage.

Coming September 4: Missionary’s Downfall at Underbelly, 1100 Westheimer: It was big news this summer when Underbelly (and neighboring bar The Hay Merchant) announced the intent to start cocktail programs. Unfortunately, the wheels at the City of Houston permitting department move very slowly. The Hay Merchant finally was able to start serving cocktails this week and Underbelly will begin on September 4. Underbelly’s initial cocktail list will be heavily tiki-focused—all the better to pair with the restaurant’s new dishes. Spirits director Westin Galleymore says the Missionary’s Downfall is not only his favorite tiki drink but also that he judges other bars by how well they make theirs. Usually, the green-hued drink is made in a blender. Galleymore’s version is made by packing “a jungle of mint” into a glass, combining it with creme de peche, house-made pineapple puree, honey syrup, lime juice and Plantation white rum, then shaking the hell out of it before straining it into a glass. The pineapple puree and honey give the cocktail a velvety texture, while the rum offers up an island ka-pow beautifully tempered by the mint’s cooling vibe. This just might be the drink guests gravitate to as Houston’s steamy summer days eventually give way to fall.