This Houston Bartender is Headed to a Texas Bourbon Competition 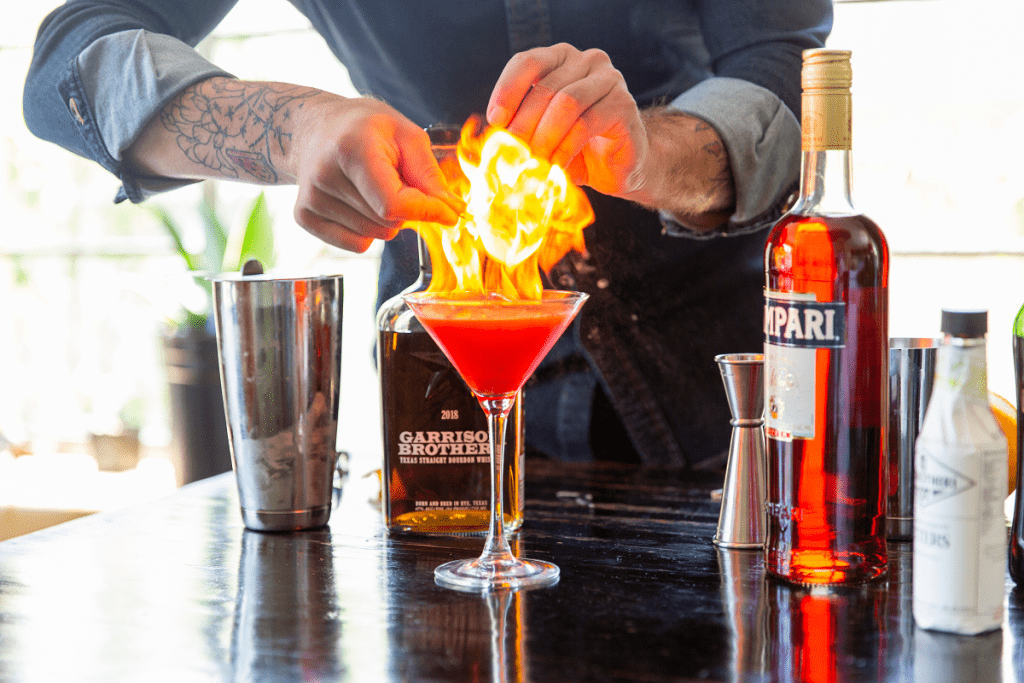 A Houston bartender at a local cocktail bar is headed to Austin for a statewide bourbon competition. Last month, over 50 bars and restaurants took part in the Bourbon Takeover of Texas — an event that celebrated the 183rd birthday of Texas and challenged bartenders and chefs across the state to incorporate Garrison Brothers Distillery Small Batch bourbon into their dishes and cocktails. Last week, Houston bartenders in battled in the local Bourbon Brawl for the right to prove their bourbon cocktail is the best in Texas. (Bartenders in Austin, Dallas, Fort Worth and San Antonio are competing on different dates for the rest of this month.)

Founder and proprietor Dan Garrison traveled across the Lone Star State with members of his staff tasting and critiquing the creations. “The level of talent I witnessed over the past week was truly breathtaking,” he said. “Traversing the state and listening to the stories behind each bartender’s cocktail inspiration was an excellent way to celebrate Texas’s 183rd birthday.”

The competitors explained their cocktails to attendees and hoped for the crowd-favorite vote that would guarantee one of the two spots in the final showdown. The other was awarded by a panel of judges, including Dan Garrison.

Northcutt wasn’t the only competitor to use advanced techniques. For his cocktail, Aranguren fat-washed the bourbon with A5 wagyu fat from Mastro’s Steakhouse. Fat washing involves adding the liquid fat into the spirit at room temperature, leaving it to sit for a few hours, and then chilling it to solidify the fat so it can be skimmed off. The end result is a spirit that gains additional flavor and body without being “fatty.” Aranguren also added a simple syrup made with Lone Pint Brewery’s Yellow Rose IPA, flamed angostura bitters and grapefruit juice.

It was a masterful creation, and though the judges didn’t advance Aranguren to the final two, his cocktail is on the menu at Mastro’s Steakhouse whiskey bar. It is complex and interesting enough to warrant the $25 price tag.

Other entries included Jones’ Harris County Sour — a riff on a whiskey sour with Benedictine, yellow Chartreuse, aquafaba (chickpea water, the protein from which adds silkiness) and smoked rosemary. Cone’s When the Sun Goes Down in Hye was an Old Fashioned with the Garrison Brothers bourbon, demerara sugar and Angostura bitters. He topped the cocktail off with a caramelized grapefruit wheel.

All of the cocktails were inspiring, but second place went to Wagner for his La Rosa Amarilla cocktail made with Garrison Brothers bourbon, mango purée, lemon juice and lavender syrup with a sidecar of Texas history. According to legend, Emily D. West, better known as The Yellow Rose of Texas, was in bed with Santa Anna when Sam Houston’s army launched an attack at the Battle of San Jacinto. Santa Anna was caught with his pants down and General Houston’s army won the battle in 18 minutes.

Wagner and Northcutt were then pitted head-to-head in a mystery ingredient cocktail battle. But unlike Iron Chef, the Japanese cooking competition that popularized the ‘mystery ingredient’ and in which competitors had a near-limitless pantry, these creators were given a limited stash of supplies they could use for their final cocktail.

Wagner gave the judges a whiskey highball he creatively called The Hye Highball. Northcutt created The Spice is IN cocktail with Galliano, Benedictine, Fernet Blanca, Lillet, peach simple syrup and a few dashes of Creole bitters. Northcutt told us when he tasted the cocktail, he thought he was too heavy-handed with the spice but decided to roll with it and worked the flavor into the name.

The judges loved the spice and awarded the championship to Northcutt for not only his cocktail, but his knowledge of Garrison Brothers history. “Listening to Cody, I believe he knows more about Garrison Brothers than I do,” said Garrison.

At the Bourbon Brawl finals in Austin this May, Northcutt is competing for a grand prize of $10,000 that’s being awarded from Garrison Brothers’ public charity, Good Bourbon for a Good Cause.

In addition to the cash prize, the winner also gets to teach a series of cocktail classes at Total Wine and More locations throughout Texas and a guest bartending spot at Whiskey on the Rock in Las Vegas. Furthermore, the winning drink is being designated as the official cocktail of Dallas Restaurant Week.

Of course, we all know which bartender Houston cocktail fans are going to be rooting for.