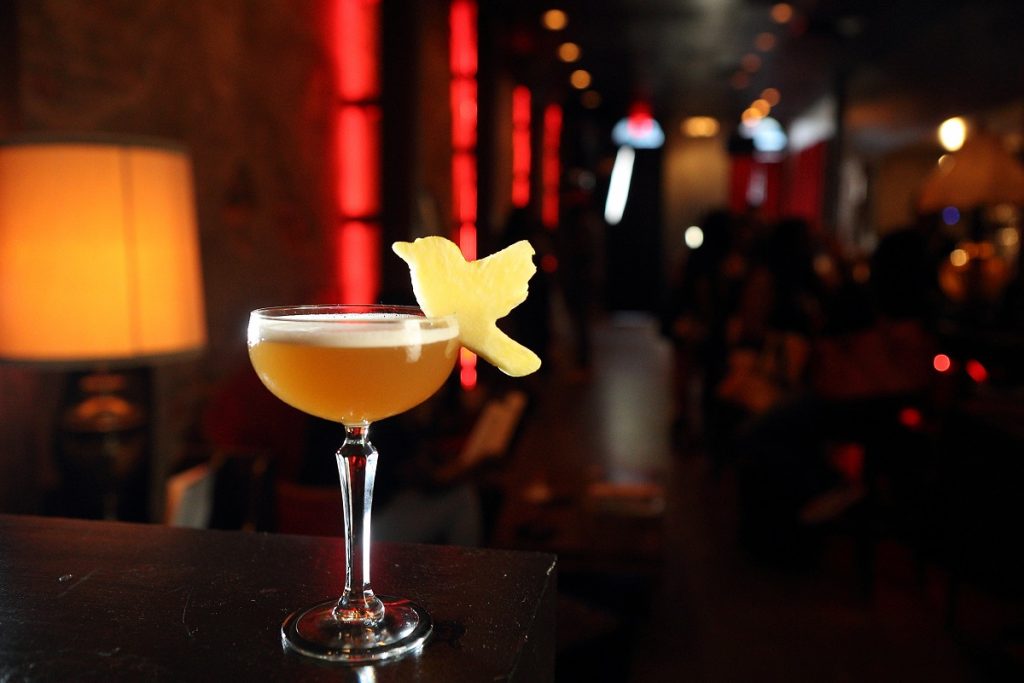 The Jungle Bird is a refreshing tropical cocktail with a pineapple parrot garnish. Photo by Quy Tran

It’s summertime in Houston, and recently opened downtown bar The Cottonmouth Club at 108 South Main is fighting the heat index with a new menu full of refreshing cocktails. Patrons who enjoy a dose of fun with their drinking have plenty to look forward to, including pineapple parrot garnishes, taking a bite out of Bowie (we’ll get to that), pickle cups and some wild glassware.

When Reserve 101 owner Mike Raymond and partner Michael Neff opened The Cottonmouth Club in April, the menu was still being refined. Neff’s fun and creative summer menu shows what he’s been working on in the interim. It showcases a plethora of house-made simple syrup infusions like the pineapple-peppercorn and Guinness syrup. Neff is more interested in serving each infusion in his cocktails than geeking out over them. “It’s delicious, but not really that interesting to talk about,” he said. “It is worth drinking in a cocktail though, especially at 10 o’clock on a Friday night when we’re all singing songs together.”

With the new menu comes an amazing happy hour special. Every weekday between 4 and 7 p.m., Cottonmouth is offering Nickel Negronis. That’s right, your first one costs only a shiny Jefferson. (The deal only applies to the first Negroni. Don’t get greedy.) The Negroni is an iconic Italian cocktail of gin, Campari, and vermouth rosso—a slightly bitter, Italian red vermouth. It’s safe to say the Nickel Negroni at The Cottonmouth Club will be a popular order.

Ordering The Cottonmouth Club comes with a side of headbanging. Video by Josh Armendariz

The cocktail is then poured into a glass and garnished with Bowie—yes, Starman himself. Raymond uses edible ink to print out pictures of David Bowie, Debbie Harry and other rock and roll icons onto rice paper. It’s then laid on top of the finished cocktail’s velvety egg white foam. The rice paper isn’t flavored so the garnish is for appearance only. It’s completely safe to consume and adds a fun flair to the drink. The cocktail will also change as time goes on, as the blended whiskey is made in small batches. We tried batch three, which was a base of Seagrams 7, rye whiskey, and American single malt. Batch four will be a blend of unaged whiskey and local Yellow Rose Outlaw bourbon.

The Little Pirate in My Mind is a riff on a Queen’s Park Swizzle. The Cottonmouth version combines Bacardi 8-year rum, — a blend of rums from eight to sixteen years old — Vanille de Madagascar liqueur, fresh lime juice, stout beer and housemade cardamom-angostura bitters. The drink is swizzled with crushed ice and served in a glass cowboy boot for a Texas twist.

Rye whiskey fans will enjoy the Long Lost Pal, a mix of Jack Daniels rye, Shackleton blended scotch, dry vermouth, berry-forward Bruto Americano and housemade Sprite simple syrup. The cocktail’s flavor gets spice and sweetness from the two whiskeys along with a hint of fruit. The Long Lost Pal is garnished with a Luxardo cherry and “a bit of folksy wisdom” rolled up like a fortune and stuck in the cocktail stick. Our wisdom was a quote from novelist Ursula K. Le Guin’s science fiction novel The Left Hand of Darkness: “I talk about the gods, I am an atheist. But I am an artist too, and therefore a liar. Distrust everything I say. I am telling the truth.”

Our favorite cocktail is the Sanity & Wits, Cottonmouth’s play on a French martini. Charbay Meyer lemon vodka, Gabriel Bourdier creme de cassis (which we recently wrote about in detail), St. Germaine elderflower liqueur and fresh pineapple juice meld together to create a silky cocktail that’s rich in flavor without being cloyingly sweet.

Whiskey drinkers might be intrigued by the Pickleback in a Pickle Cup. Pickleback shots aren’t anything new, but Cottonmouth has upped the game by hollowing out the end of a pickle and turning it into a shot glass for the pickle brine. Take the shot of Slane triple cask Irish whiskey, take the shot of pickle brine, then bite the pickle and pretzel sticks below. The pickle brine tames the taste and strength of the 80 proof whiskey and has been said to intensify the oak flavor from the barrel aging as well.

Cottonmouth’s goal is to create great drinks without requiring patrons to be cocktail experts. After all, not everyone knows what bruto americano, orgeat, or velvet falernum are; in this case, they’re sweeteners that play a vital part in cocktails. Look for future Cottonmouth menus to have an ingredient glossary so that patrons can be fully aware of each flavor to expect in their drink.

Patrons who prefer to have more control over their cocktails will love the Pinwheel Old Fashioned and French 75/76 options. The traditional Old Fashioned recipe is simply “spirit, sweet, and bitter” but Cottonmouth takes it to another level by letting patrons choose from bourbon, rye, agave, or aged rum. Sweeteners can be simple syrups or agave nectar and any of the housemade bitters can also be chosen to form one of the 165 possible options. The Pinwheel French 75/76 lets patrons choose between different cognacs, gins, and vodkas while also selecting sparkling wine, Topo Chico or Lone Star for the bubbles.

Cottonmouth also just launched the upstairs bar where patrons can order bespoke cocktails from Michael Neff and the rest of the Cottonmouth staff. The area features Raymond’s incredible paintings of Texas musicians Lightnin’ Hopkins, Billy Gibbons, and The Suffers’ lead singer Kam Franklin, and is available for private events. Interested parties can contact Theresa Lara for more information on the upstairs venue.

“Love doesn’t just sit there, like a stone, it has to be made, like bread; remade all the time, made new.” – Ursula K. Le Guin, The Lathe of Heaven.

We’re excited about this summer menu and can’t wait to see how Cottonmouth continues to re-make its bread moving forward.